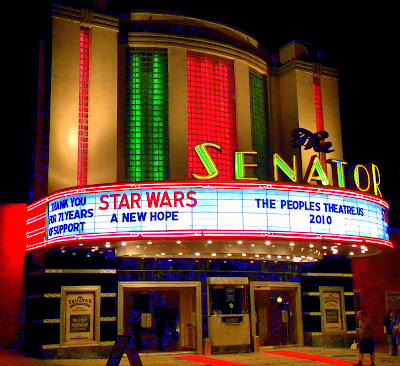 On October 5, 1939, a beautiful Art Deco movie palace, designed by architect John J. Zink, was opening on 5904 York Road in the Govans section of Baltimore. On the marquee was the Spencer Tracy classic "Stanley and Livingston". On 7/21/10, the marquee spelled out yet another classic: "Star Wars-A New Hope". Then, after the last of the overflowing capacity crowd had left around 11:00 PM owner Tom Kiefaber, who, in 1977, had taken over the day-to-day operation of the theater which had been in his family since day one, finally closed the doors.

What had transpired for those 71 years will probably never be duplicated again. Baltimore, and the film world, has lost two true originals: "The Historic Senator Theater" (as the owner would proudly announce in person or on a pre-recorded message prior to each screening) and the passion & dedication of Tom Kiefaber. Oh, the show will go on, as renovations by the new proprietors will soon be underway. Hopefully the lobby's original terrazzo floors and striking art deco murals will remain untouched, as well as the back lit sunburst & the rainbow prisms on the ceiling. And, I can only hope and pray that the same care and diligence that Mr. Kiefaber put into every screening will be continued from here on out.

Tom took such tremendous pride in each presentation that in 2003, the Senator was selected to become the first venue to complete the Historic Cinema Certification Program offered by George Lucas' THX Ltd., the San-Rafael, California based company. You could always expect state of the art projection & sound systems to be presented on the massive 40 ft curved screen. Folks, there was a reason that the theater has been listed on the National Register of Historic Places since 1989.

The Senator's glory can be viewed for all time on celluloid in films such as "Twelve Monkeys", "Diner", "Avalon", and John Water's "Cecil B. Demented". Several premiers have occurred there over the years, as well, for Baltimore location films "Ladder 49", "Runaway Bride", "Avalon". John Waters & Barry Levinson often chose The Senator to premier their works.

In 1999, Tom received a call from the Baltimore Little Italy neighborhood association who asked him to put in motion an idea to show movies on a space, which Tom later realized, was the perfect ratio of a 16mm movie screen. However, the only spot for a projector was from the apartment window of longtime Little Italy resident 89-year-old John Pente. John had been living in Little Italy since birth, and in that apartment, bought by his grandparents, since 1941. He was truly a legend in the neighborhood and he would do anything to bring the community together. As a result, a heavy Bauer projector was carried up three flights of stairs to John's bedroom, and The Little Italy Summer Outdoor Film Festival was born. Its notoriety spread nationwide. Coverage included The Today Show, the front page of The New York Times, & ABC's World News Tonight. A five-minute short was even produced that appeared regularly on Northwest Airline flights beginning in 2000. Four countries (including Italy, of course) sent their representative to inquire about the event. Tom even offered free popcorn to the attendees who brought their own folding chairs to the parking lot in front of John Pente's apartment. (Sadly, and ironically, John Pente, passed away at the age of 100 on July 26th, a mere 5 days after Tom's last day.)

Over the years, Mr. Kiefaber annually offered specially priced or free screenings of classic films, especially during the anniversary of the building's opening and surrounding the Christmas holidays.

In 1993, Tom presented the extraordinary 70mm documentary "Baraka" which was filmed by Ron Fricke in 24 countries on 6 continents. I was so moved by the work and presentation, that I came back multiple times during its run to see it on the magnificent screen at The Senator because I knew I would probably never ever see it the same way in any other theater. Shortly thereafter, Tom started celebrating Earth Day by offering to show it free each year. The event, coupled with a drum circle in the lobby before the show, was a mainstay of the community. I came back repeatedly-often bringing friends to witness one of the most amazing documentaries I've ever seen-the only way it should be seen: on the giant screen at The Senator. He and I often spoke of someday putting our money together to buy our own 70mm print of the doc.

Tom Kiefaber was honored in 2003 with the Business Leadership Award “in recognition of his tireless advocacy for historic, independent movie theaters".

Finally, I'd like to personally thank you, Tom, for you are the reason this column exists. In 2007, in response to an occasional Email to my mailing list buds in which I reviewed certain films I had seen, you suggested that I place my writings on the Internet. I took your advice and, because of it, I now share my thoughts with a multitude of readers. Thanks, Tom. I sincerely hope that whatever endeavor you undertake from here on out will bring total success into your life; and bring to you as much joy as you have brought to us moviegoers over these many years. You will be missed!

There is a group, The Friends of The Senator, who are dedicated to preserving the heritage of The Senator and are providing up-to-date news and information regarding this theater. Their site is: http://www.friendsofthesenator.org./

Other sites worth noting:

The People's Theater at http://www.thepeoplestheatre.us/; 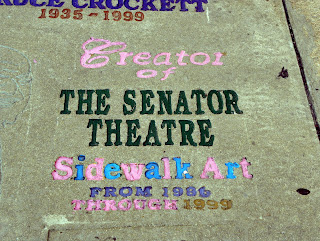 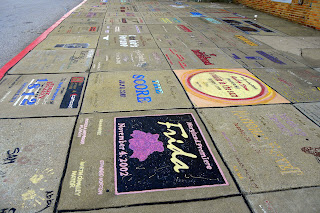 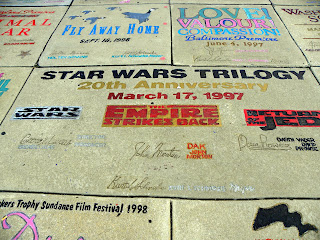 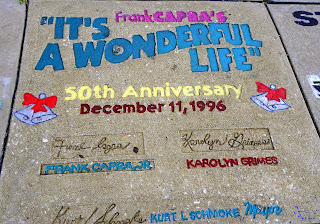 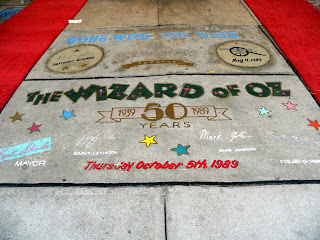 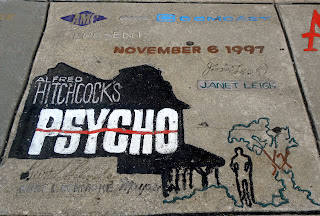 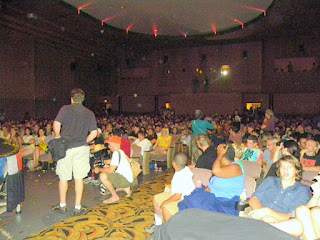 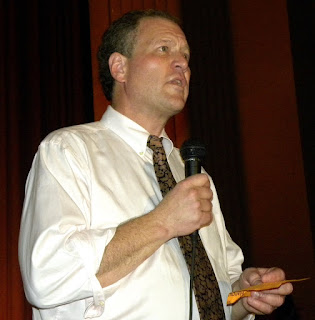 Tom Kiefaber addresses the audience for the final time 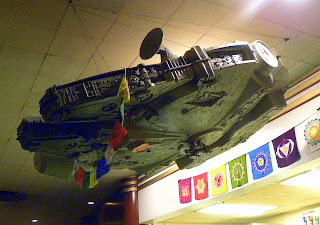 The Millenium Falcon hovers over the concession stand 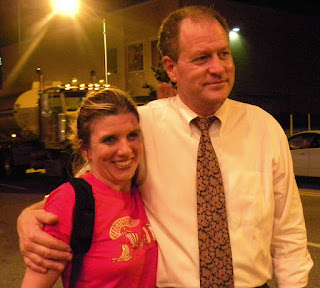 Theater manager Gayle Grove with Tom after the show 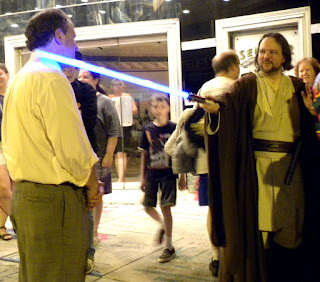 Tom gets knighted by a Star Wars Jedi Knight wannabe 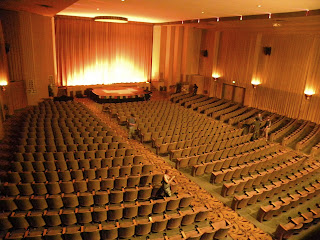 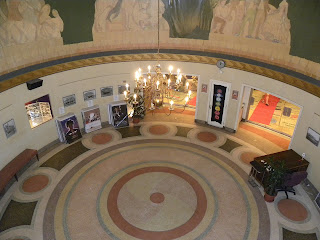 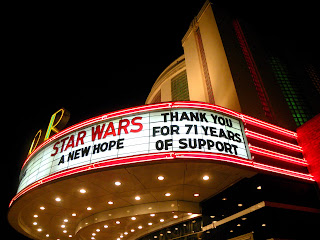 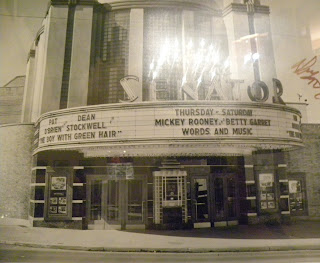 The Senator Theater in 1948