Sunday October 25, 2015
I despise reviews that delineate all of the plot points, or worse, spill spoilers throughout the critique.  To that end, this review will comprise one of my most simplistic plot descriptions of this extraordinary film by Irish director Lenny Abrahamson.
If you've read Emma Donahue's 2010 New York Times best seller, you have full knowledge of the plot.  If you haven't been exposed and avoided descriptions, this film is best savored without one knowing the twists and turns of this harrowing thought provoking masterpiece.
The film opens quietly as we observe a five-year-old lying in bed with his mother.  The camera slowly reveals the "room" they occupy.  Measuring a mere 10 feet X 10 feet, we quickly learn why its occupants' lives exist totally in its narrow space.  As previously stated, why they are there and the events that follow will not be described here.  Suffice it to say that what unfolds will have you on the edge of your seat and jump start your analytical imagination as it ponders the psychological effects and incredible bond that exists between child and parent.

What will please those who read the novel is that Donahue also wrote the screenplay and both she and the director take a calculated risk imparting the narration to actor Jacob Tremblay who also plays the five-year-old.  The film is mainly told and viewed from his perspective and the result is one of the strongest child acting performances I have ever witnessed.  (Speaking to several folks in the audience after the screening who had read the book, I was informed that they were extremely pleased by the translation from written page to the screen-which is unsuccessful more often than not.)

Also on display is a breakout performance by Brie Larson who recently appeared in this years comedic Trainwreck.  Relegated mainly to supporting roles in the past, her rendering as Ma allows her to display a spot-on range of emotions that should easily result in an acting nomination by The Academy in January.

Supporting the two principals are veterans Joan Allen and William H. Macy, as the grandparents, who add their usual excellent acting chops to the proceedings.

Director Abrahamson is a talent to watch.  Although he has only directed two previous films (2013's What Richard Did and 2014's Frank) each has been critically acclaimed.  His third movie will certainly be well represented come awards time. 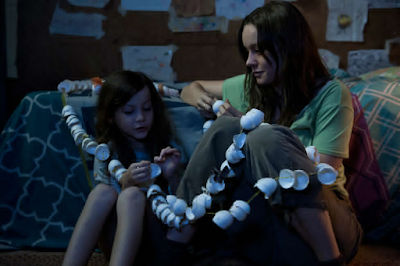 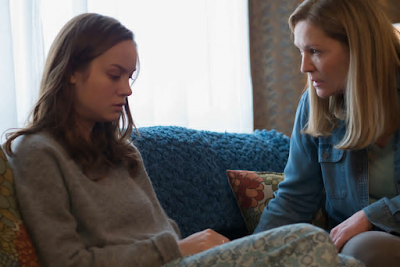 Ma and Grandma (Joan Allen) discussing their relationship﻿
No comments: Links to this post