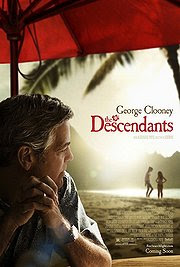 Alexander Payne's success performing double duty as a director and screenwriter has clearly placed him in my elite category.  His four previous films include "Citizen Ruth" (1996), "Election" (1999), "About Schmidt" (2002), and the phenomenal "Sideways" (2004) which would have been my pick for a Best Picture Oscar. Each successive film has gotten better and better.

Therefore, after a long seven-year hiatus, my anticipation and expectation gauges were nearly off the charts when I went to screen Payne's latest. I suppose there was really nowhere to go but down (excuse the pun) after "Sideways", which might help explain my overall disappointment.

George Clooney (extremely busy this year with his third release) plays successful real estate lawyer Matt King, a descendant of Hawaiian royalty, whose wife lays in a hospital, comatose from a boating accident. We quickly learn that their marriage was already on shaky ground, made shakier when his eldest daughter Alexandra (Shalene Woodley in a performance that will surely put her in running for Best Supporting Actress) reveals to Matt that her mother was having an affair with a local real estate mogul (Matthew Lillard). Payne proceeds to juggle a number of plot lines:
- Matt's chagrin (he calls himself "the backup parent") of now having to care for his precocious daughters Alexandra and Scottie (pre-teen Amara Miller)-a task previously handled exclusively by his wife.
-the decision to pull-the-plug on his brain dead wife
-his search for his wife's lover
-Matt, as the main executor of his family's trust, must decide on the winning bid for 25,000 acres of prime beachside property that has been in his family since 1860.

Payne, along with his co-writers Nat Faxon, and Jim Rash have adapted Kaui Hart Hemmings' 2007 novel to produce a darkly comedic script that is uneven and ultimately uninspiring-which is a problem when dealing with the nearly two hour running time. Clooney's somewhat droll ineffective voiceover narration in the beginning is, thankfully, dropped a quarter of the way through. Also, although Clooney tries his best to portray the full range of emotions as he threads his way through the myriad of crises, I never found myself as connected and involved as I was with Payne's other films. Sid (Nick Krause), Alexandra's boyfriend seems out of place here and would be more at home in a Judd Apatow comedy. Finally, Payne's saturating nearly every frame with native music will either have you enthralled or annoyed depending on your musical tastes. Put me in the latter category.

On the plus side, there is a terrific supporting role by the wonderful Robert Forster as his cantankerous father-in-law and, visually, the film is a loving post card of Hawaii.  However, in the final analysis, the drama didn't grab me and ultimately left me cold.

"The Descendants" has platform openings beginning November 18 (including DC) and a November 23 Baltimore opening. 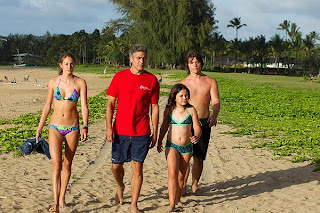