Director/co-writer Derek Cianfrance follows up his well-received  "Blue Valentine" (2010) with this ambitious third effort once again utilizing A-list actor Ryan Gosling. And "ambition" may be the main problem with the film as it basically covers three separate, but interconnecting tales spanning two generations that loses significant steam three-quarters through its overlong 140 minute narrative.

The first, and by far the most engaging, of these stories begins with a brilliant tracking shot as the camera follows a blond-haired, buffed and heavily tattooed Luke (Gosling) who is about to perform motorcycle stunts as part of a traveling carnival.  After an apparent one-night stand with Romina (Eva Mendes) the scene shifts a year later when Luke returns to the town to discover that his initial rendezvous resulted in the birth of a son with Romina-who has since moved on to a stable permanent relationship.  Undaunted, penniless Luke is determined to reunite with Romina and care for his infant son, Jason.  To this end, he quits the carnival and begins to work for a seedy auto mechanic (played by the veteran Aussie actor Ben Mendelsohn) who introduces Luke to fast cash in the form of bank robberies.

That activity leads to the second part of the triptych involving honest rookie cop Avery Cross (Bradley Cooper in another serious turn after his comedic "Hangover" roles) who tracks down Luke after one of his robbery heists.  Subplots surface involving bad cops, led by Detective Deluca (Ray Liotta in yet another typecast role) and Avery's troubled family life with wife Jennifer and their infant son, A.J.  (Are you beginning to see the plot connections?)

Skip fifteen years later and now we are reintroduced to Jason and A.J. (Dane DeHaan and Emory Cohen) who are high school friends whose interaction and fate can't escape the legacy of the past.  Part three is the least interesting as the filmmaker strains to connect the dots of the previous story lines and ultimately the ironies seemed forced.

Ciafrance has presented excellent production values especially those of cinematographer Sean Bobbitt ("Shame"; "The Hunger"), and provided an interesting original score by Mike Patton.  However, I wished the director would have concentrated more on Part one and the Ryan Gosling character and less on making an epic with its increasingly less interesting characters and story-which tended to drag it all down.

"The Place Beyond The Pines" (the title is the English meaning of the city of Schenectady, New York and is derived loosely from a Mohawk word for "place beyond the pine plains") began its platform release on March 29 and opened in the Baltimore-Washington area April 5.

The director attended the screening and afterward did a Q and A where he told the story of how he convinced Gosling to do the role of a bank robber.  Two years before he shot "Blue Valentine" he had already begun writing the TPBTP script with Ben Coccio when he was having dinner with Ryan. When he asked Gossling what he had always fantasized about, Ryan said he always wanted to rob a bank and when Derek mentioned that he was writing a movie about a bank robber, the director asked him how he would do it.  The actor actually explained the plan that was already written into the script (which included thirty-seven drafts).  At that point Derek figured they were destined to work together and "that he would make his dreams come true."

Also revealed during the discussion was that Bradley Cooper actually completed the film in 2011 prior to his breakout role in "Silver Linings Playbook".  He was so impressed with the actor after his meeting with him (despite his preconceived notions on the "sexiest man alive" dude from "The Hangover") Derek re-wrote the script around him to portray an all-American boy on the inside who was grappling with "something inside of him that was corrupting him".

When asked how he got the performances from his actors, the director said he asks them to do two things:  surprise him and fail.  He explained that as an audience member watching movies, he always wanted to be surprised and by failing, they would extend their boundaries to get it right.

Ciafrance also stated that he hates to write alone-that he regards writing as a corroborative art form and that he needs to have someone to talk to.

As for Ray Liotta, Derek said that one of his and Ciccone's favorite films was "Goodfellas" and that both wrote the Liotta's character into the script.

Ciafrance recounted that his original DP dropped out eight weeks into production because he had a dream that he would die during filming.  Sean Bobbitt assured him that he had experience as a war photographer and that he had no such fear.  Then, while filming the opening shot, Bobbitt insisted on filming the three motorcycles circling in the Globe of Death  from the center of the cage.  On two successive takes, motorcycles collided with the cinematographer.  The second accident put him in the hospital with a concussion.

Gossling's face tattoo of a dagger dripping blood was the actor's idea-which he regretted having after filming had already begun.  Also, Rick Miller ("Batman"), which Derek called the greatest motorcycle stuntman in the business, trained Gossling for his daredevil work during the robberies.  However, the director added Ryan did not do the opening stunt in the Globe of Death scene as "there's twenty-two people in America that can do that shot . . . and Ryan Gossling isn't one of them."

Derek, who hails from Denver, told me that he wrote a series for HBO entitled "Muscle" about a guy who becomes a bodybuilder and is currently waiting for the production budget to come in. 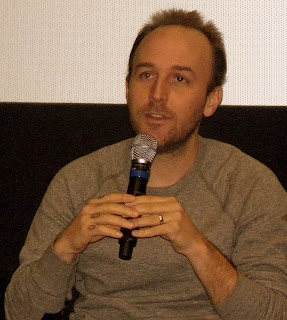 Director Derek Ciafrance responds to
an audience question
﻿
﻿
No comments: Links to this post