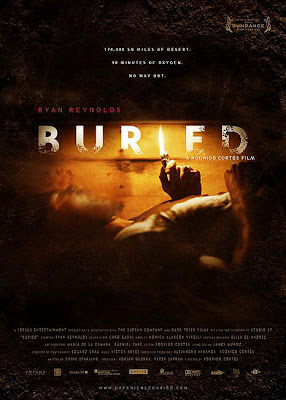 As the credits were rolling, I sat there transfixed-immediately probing my brain as to how I was going to approach the review of this film after I had just spent an hour and 40 minutes watching Ryan Reynolds ("The Proposal", but is best known as the actor who dumped pop singer Alanis Morissett to marry Scarlet Johannson) alive in a coffin. My initial conceit was that this was a near miss-a 2 1/2 star flick. However, this film will not go away from my brain cells, and the more I think about it, the more there is to admire about it. Director Rodrigo Cortés, proficient in short films, has ingeniously made, along with cinematographer Eduard Grau ("A Single Man"), his first full-length feature that grabs and won't let go.


Paul Conroy, an independent trucker in Iraq, wakes up in that coffin, along with, among other things, a pen, lighter, flashlight, and a cell phone. After the initial shock of where he is, he gets a series of phone calls and discovers that he has been kidnapped and buried for a ransom. Over the course of 110 minutes (which helps explain the life of that cell phone battery that seems to last forever-until we realize that the movie plays in real time), he desperately tries to contact outsiders to try to help him escape his tomb.

Cortés' ingenious use of light (occasionally throwing the screen into darkness), sound, and a nice haunting soundtrack by Victor Reyes, makes it even more suspenseful, claustrophobic, & creepy. In addition, Reynolds pulls it all off with an intense believable solo acting turn (only voice-overs are supplied by other actors) that is sure to finally get him noticed in a big way.

Although "Buried" is not an easy film to recommend, and it does lose its way a couple of times during the middle reels, you won't be able to look away from this exercise in terror that delivers up until the very end.

The film started platforming across the U.S. last Friday, including D.C., and is due to open in Baltimore next month. 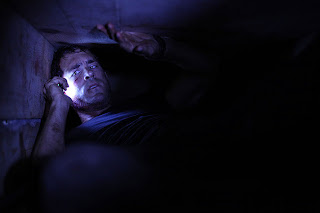 Paul Conroy (Ryan Reynolds) in a bit of a fix
No comments: Links to this post 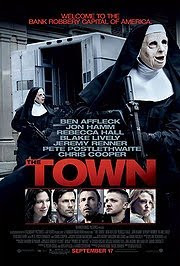 The town referred to in the title is Charlestown, identified at the outset as a Boston neighborhood with the unique distinction of having more bank and armor car robberies in one square mile than anywhere else in the U.S. Armed with that tidbit of information we immediately are thrust upon a bank robbery about to take place. The perpetrators are a gang of four and, with precision skill, we quickly recognize that these guys are quite adept at their occupation.

During the course of the bank robbery, they take the bank manager hostage and later release her. When the leader of the gang, Doug MacRay (Affleck), who has that heart of gold, finds out the hostage lives in their hood, he takes it upon himself to check her out. Soon the cops and robbers theme, takes a turn into romance and personal redemption. Added in are two more heists that turn into increasingly major gun battles. The last, staged at Fenway Park, is so ridiculously unrealistic that my eyes haven't stopped turning in their sockets.

Based on Chuck Hogan's 2004 novel "Prince of Thieves" (which won the 2005 Hammett Prize for excellence in crime writing), Ben Affleck follows up his Boston-based directorial debut, 2007's "Gone Baby Gone", with this gritty crime drama in which he also stars & co-wrote (along with Peter Craig & his Gone Baby Gone co-writer, Aaron Stockard).

The film should please the most ardent popcorn-loving crowd. Although I do not count myself as one of them, there is much to admire here. First is the acting by some of Hollywood's finest talents. At the top of that list is last year's Oscar nominated Jeremy Renner from 2009's AA Best Picture "The Hurt Locker". His role here as the hotheaded Jem, Doug's childhood friend & partner, is a volcano ready to explode. His performance proves his best acting nomination last year was no fluke-and could put him on the nomination list again. His total immersion in his character made me squirm while watching him in my seat. As the bank manager, Rebecca Hall (wonderful in Woody Allen's "Vicky Cristina Barcelona" and this year's "Please Give") perfectly portrays the roller coaster emotions she experiences. As the FBI agent pursuing the robbers, Jon Hamm (best known for his TV work in "Mad Men") is totally believable and is the perfect foil for the gang. Blake Lively gives a commendable performance as Jem's sister, a lady who still has the hots for MacRay. In addition, there is an all too brief wonderful performance by the great Chris Cooper as Doug MacRay's dad, currently living out his days in prison.

Also positive is the look and feel of the locations, which hometown boy Affleck knows all too well (although the Boston Irish accents are so thick in spots that I wished that subtitles were provided). And the soundtrack by David Buckley & Harry Gregson-Williams perfectly complements the action.

The main problems: the film needs some serious editing. Cutting at least 20 minutes would have made it tighter. Also, those action sequences, although expertly staged, go way over the believability scale for my tastes. The last shootout at Fenway Park, as I mentioned above, is practically science fiction and takes away from everything that preceded it. And, of course, we have that usual Hollywood ending that neatly wraps up the 2 hours but ultimately left me cold and disinterested.

So put me down for a 2 1/2 star flick that elevates to 3 stars due mainly to the incredible acting Affleck gets out of his cast, as well as the overall production values on the screen. Just be certain you have enough popcorn to get you through the 2 hours. 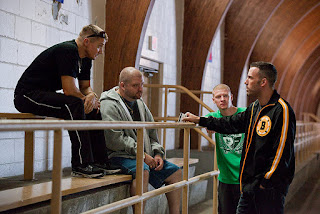 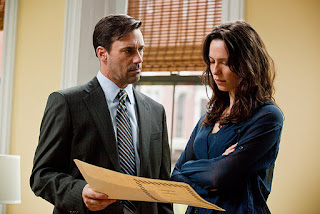 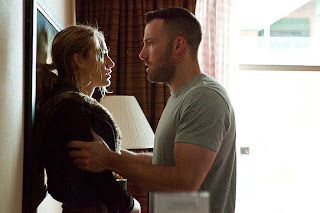