Catching up: 3 FILMS TO PUT ON YOUR NETFLIX LIST! 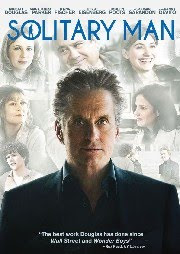 "Solitary Man" (*** 1/2-90 minutes)-Producer/Director/actor Michael Douglas won an Academy Award playing a sleaze ball con artist in "Wall Street". In "Solitary Man", his performance ranks up there with his personification of Gordon Gekko. Douglas IS a solitary man and for good reason. The narcissism flows like lava from an active volcano engulfing and consuming everybody that comes into his path. Hell bent on personal destruction, we witness several days in the downfall of this dude who once had it all: great wife (Susan Sarandon), promising career as car salesman "Honest Ben Kalman", beautiful family-a man with so much charisma & charm that he is able to seduce anything his little heart desires. And that's the problem. The man has no heart for anyone but himself. Although I'm describing a very despicable dude, Douglas makes us pity him and that is the beauty of his acting. Directed by Brian Koppelman, who co-wrote the script with David Levien, this (subtle) comedy/drama has some terrific supporting roles including Mary-Louise Parker as his current girlfriend; Imogene Poots as her daughter who is accompanied by Douglas to her college-to-be (he knows the dean and mom has the flu); Jenna Fisher as Ben's daughter; Jesse Eisenberg as the college student who gets a few life lessons from Honest Ben; and Danny Divito, Ben's old college buddy who runs a campus greasy spoon. All are, in different ways, seduced by Ben who just can't seem to finally grown up and get it. A spot-on character study and tour-de-force by one of Hollywood's finest actors who keeps getting better and better with age. The DVD release is scheduled for September 7. 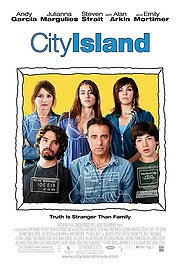 "City Island" (****-104 mintues)-This is one of my favorite films of the year. The audience award winner at the 2009 Tribeca Film Festival (run by Robert DeNiro) is a wonderful human comedy that completely took me over with it's charm (hmmm-seems to be a running theme) about keeping secrets from those you love and dealing with the consequences. Andy Garcia gives a 4 star performance as Vince, the head of an Italian-American family whose members are each housing a secret. He's a prison guard who yeans to be an actor-so much so he secretly goes off every Wednesday to acting classes telling his wife (the wonderful Julianna Margulies-who previously paired up with Garcia in 2001's "The Man From Elysian Fields") he's playing poker. Not believing him, she secretly tries to start an affair with Tony (Steven Strait), a dude whom Vince rescues & brings home from prison after he recognizes him as the child he abandoned in a prior life. Of course, he keeps this fact a secret from Tony. Meanwhile, Vince's daughter (Dominik Garcio-Lorido) is visiting home from college-well, not really. She lost her scholarship & is trying to earn her way back in by working as a stripper. Teen-age son Vinnie (Ezra Miller) has a peculiar secret fetish: craving overweight females eating in their kitchen in front of a web-cam. And even the secrets have secrets: Vince's assignment in acting class (headed by the always winning Alan Arkin) is to share a secret with a fellow student in preparation of voicing a monologue in front of the class. He's paired with Emily Mortimer who, not surprisingly, has a secret of her own. Director/screenwriter Raymond De Felitta keeps the clever screenplay moving along at a brisk humorous pace and utilizes a brilliant score by Kim Oler and lyricist Allison Hubbard that is perfectly suited for the visuals. The pace and charm of the film reminded me of the wonderful Canadian film "Seducing Dr. Lewis" which won the 2004 Sundance Audience Award. (You should put that one your list as well.) "City Island" (which refers to the seaport community in the Bronx) is being released on DVD on August 31. 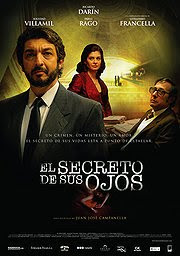 "The Secret in Their Eyes (El Secreto de Sus Ojos)" (****-156 minutes)-This year's Foreign Language Academy Award winner is, quite simply, a masterpiece. I was a bit miffed when "Sin Nombre" wasn't even nominated (an equally brilliant film), but, having seen this one, my feelings have been tempered. Director/screenwriter Juan José Campanella has crafted an intricate narrative that cuts back and forth over 25 years with 2 themes at its core: a senseless rape & murder of a young beautiful newlywed and an unrequited relationship between an attractive successful judge (Soledad Villamil) and her investigator (Ricardo Darin) who secretly loves her. The story, centered in Buenos Aires, begins in 2000 as the investigator, Benjamin, now retired and still haunted by the case, is struggling to write his memoirs about the crime. After he takes the manuscript to his former boss, Irene, for her critique, each story line begins its meticulous journey allowing you to savor, like fine wine, the beautiful tapestry of the plot. Campanella has populated the story with wonderful supporting characters-especially Guillermo Francella as Sandoval, Benjamin's alcoholic assistant who plays a prominent role in investigation, and Pablo Rago as Morales, the widower who spends his days waiting to spot the murderer in a train station. In addition, there is a chase sequence in a soccer stadium that is astounding in its execution. However, the quiet reflective moments are just as powerful as the action sequences and, by the end, you'll agree with Roger Ebert's assessment that, " This is a real movie, the kind they literally don't make very much anymore". The DVD is currently available.