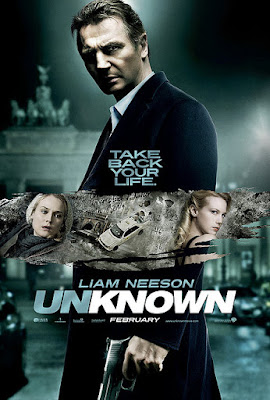 I had severe trepidation going in to the screening. The director, Jaume Collet-Serra, had a somewhat miserable past track record-which included a (yet another) version of "House of Wax" (2005) and 2009's "Orphan". Although not a complete failure, I admit this extremely implausible action film kept my interest up for most of the running time-before falling completely apart in the last reel.

After his personal success in 2008's "Taken", Liam Neesom is once again cast in an action role where, after a violent auto accident, he has to deal with amnesia-his and/or all of the folks who, he believes, knew him before the accident. In Berlin to attend a biotechnology convention with his wife (January Jones-currently a regular on TV's "Mad Men"), things go quickly awry for Dr. Martin Harris after discovering, while checking in at the hotel, that he left his briefcase at the airport. Catching another taxi to return to the airport, that accident happens where his (female) taxi driver (Diane Kruger) rescues him from the icy waters. After awakening in the hospital, he discovers no one knows who he is. That includes his wife, who is now in the company of the, supposedly, "real" Dr. Harris (Aiden Quinn).

That's the setup as numerous plot twists-and-turns transpire that eventually leads to a conclusion complete with an exhaustive explanation/wrap up. However, by the time it arrives, I could have cared less about whom he was and the preposterous motives and goings-on behind all the nonsense.

Neesom plays a convincing part, as do all of the principals. And the action sequences are nicely staged, but, in the end, I found myself walking out with nary a remembrance, or care, of what I had just witnessed.

Martin Harris (Aiden Quinn)-or is he?
No comments: Links to this post

Monday March 7, 2011 One of the problems with having a day job & seeing multiple films over a course of a week is the necessity of spending a couple of hours in a darkened theater after a particular grueling day of work. That is to say, at times, depending on the stress I've encountered, and/or the fact that I'm just plain exhausted, and/or I'm in a bad mood-I'm just not as focused as I should be and, consequently, my opinion of a particular film might be skewed as a result. I've tried not to let that enter into my writings. Thankfully, this has happened only on a very few occasions. That being said, since I started this site over three years ago, there has only been one other instance where I've slightly changed my opinion of a film after repeated viewings, and both films, in my opinion, turned out to be the best films I had seen that year. The first time was in 2008 when I revisited "The Curious Case of Benjamin Button" after screening it twice. The latest instance is "The King's Speech". Both films I initially gave 3 1/2 stars. Yesterday, after re-screening "The King's Speech", I walked out thinking that I slightly misjudged this absolutely wonderful, perfect, masterpiece. From the first frame to the last, few films have affected me, taking me through the gamut of emotions I experienced that, somehow, eluded me the first time around. Fully rested. Fully involved. Fully blown away. This film was clearly the best film of the year and deserved every accolade it has received from nearly every corner of the film community. What particularly struck me was how wonderful Geoffrey Rush was in the role as the king's speech therapist. In addition, Alexandre Desplat's score, whose distinguished career includes, interestingly, the score for Benjamin Button, is woven perfectly into the film-which helped make this a complete filmic experience. The Academy got it right. "The King's Speech" gets a 4 solid stars.
1 comment: Links to this post

THE SHOW (*)
OMG!!! What the hell was that?! I just spent 195 minutes that I'll never ever get back. Although that abomination was a train wreck I couldn't' look away from, unfortunately, there were few redeeming qualities the entire production offered that could have elevated that one star rating. I'm usually on the more positive side of this show. Where others pan the living daylights out of it, I find enough interesting moments to make this even a little worthwhile. But this year, I'm going with the majority. First off, the decision to wander away from the usual tried and true, namely, an established comedian not solely tied to The Industry (Steve Martin, Billy Crystal, e.g.) or a talented song & dance dude (Hugh Jackman), looked promising but ended up a disaster. Okay let's appeal to the 20-somethings by putting onstage a handsome young up-and-coming actor and a nubile young actress. What seemed like an interesting experiment ended up with egg all over every one's face. I hope James Franco's deer-in-the-headlights visage has returned to some sense of normalcy by now-but the fact is, he was clearly out of his league here. Maybe it was the script, the moment, whatever-he looked lost and, as some have remarked, disinterested at best, or even stoned at worse. As for Anne Hathaway-well, she fared better but not by much, as she tried her darnedest to cover for partner. However, in doing so, she nearly appeared desperate. I suggest they go back to someone who can bring their own humor to the process and who can pick apart the incredibly pompous proceedings-which, lord knows, it desperately needs.

THE PLUSES
Hmmm-this is a tough one. Okay. The first 15 minutes. If you missed it, the show's highlights were all there. The last 93% were . . . well, see above. The opening montage, although not original in concept, was humorous as it took the dream level concept of "Inception" (virtually the only mention this blockbuster received all night) and put the hosts in various nominated films and, even some older ones. Sprinkled in were cameos including former host Alec Baldwin. A humorous, well-produced segment that brought some promise and hope for the rest of the show. A period of uninspired, unfunny repartee by the hosts (who were the writers for this stuff? ) was followed by an extraordinary, touching appearance by Kirk Douglas who was, to put it mildly, a mere shell of his former self. That was followed by the awarding of the best-supporting actress award to Melissa Leo who included an f-bomb in her acceptance speech. And it was all off a cliff from there.

BIGGEST SURPRISE WINNER
None. Usually there is at least one. But this year? Nada. Zilch. This only contributed to the drabness.

BIGGEST ACCEPTANCE SPEECH FLUB
That honor goes to Christian Bale. Although not as bad as Hillary Swank, when she forgot to thank ex-hubby Chad Lowe during her 2000 acceptance speech for "Boys Don't Cry", Bale merely forgot his spouse's name. Uh-oh. I bet that post-show conversation was interesting. At least he didn't call her by another name.

NOMINEE WHO APPEARED TO BE HAVING THE WORST TIME
Director David Fincher. Although his "Social Network" won three awards (one less that "The King's Speech" with four) every time the camera focused on him in the audience, he seemed like he wished he was somewhere else. He appeared utterly humorless. Even though everyone praised him to the hilt on the podium, his expression was so dour he seemed almost constipated. Hey, Dave, loosen-up! (Actually, I can't blame him. I felt the same way watching this show!)

MOST INCOMPREHENSIBLE PRESENTERS
Justin Timberlake & Milas Kunis. I hope they got whatever the hell they were talking about because I'm certain no one else did.

BEST PRESENTER
Sandra Bullock. Appearing near the conclusion to hand out the Best Actor award, although not my favorite actress, she seemed very much at ease and funny in discussing each of the nominees. She was so good, I remember thinking that she would be a nice choice for future hosting duties-if they can't land that A-list comic. Unfortunately, only the die-hards were probably awake to see her by the time she came onstage.

MOST PAINFUL PRESENTERS
Robert Downey, Jr & Jude Law. Their banter was embarrassing and throwing in jokes aimed at Downey's sensational past escapades was, to me, totally unfunny and inappropriate. A close second was Kirk Douglas. Although it was wonderful to see him, his interminable time on stage was awkward & close to embarrassing-taking forever to announce the Best Supporting Actress winner .

MY FINAL PREDICTION TALLY
I had 10 out of 11 correct of my major awards predictions-missing out on Best Director. Even though I was somewhat pleased that the award went to the director of the Best Picture, David Fincher ("The Curious Case of Benjamin Button") again, was robbed. Maybe next year he'll win and give the world a smile. I also predicted that "The Social Network" would win the Best Cinematography award, which went to "Inception". I guessed wrong on all three of the short film categories, but, having seen none of them, I had a 1 in 5 chance-a 79% overall.
3 comments: Links to this post