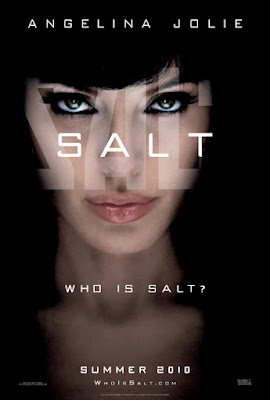 In "Salt" Noyce combines the heroic femme fatale theme with the spy genre to give us, yet another, James Bondish, totally outlandish, action film that seems to be a requisite of the majority of summer flicks year after year. (Nice to see strong willed female roles abounding lately; namely, Lizbeth, the gal with that dragon tattoo, & now Evelyn Salt). This time around we have the charismatic Angelina Jolie doing the honors as the focus of a plot that never quite reveals who she is or whom she is working for until the end of the final reel.

Let me say up front, I'm not a huge fan of these bombastic, leave your brain at the front door, popcorn movies. But I have to hand it to Noyce, the guy can direct action sequences with the best of them. And, although the plot is never fully revealed until the end, you actually won't care because the presence of Jolie is so mesmerizing that the superhuman stunts she performs, with no let up, keeps you interested in the game nonetheless.

The film opens with Jolie as Evelyn Salt being tortured unmercifully by North Koreans who suspect she is a spy. Her life/torturing are sparred when she becomes involved in a prisoner swap. Advance 2 years later and she is about to celebrate her 2 year anniversary with her husband, a German (August Diehl), who happened to be involved with freeing her in North Korea. She is working as an undercover CIA operative in D.C. and, just as she is about to leave work to celebrate, a Russian defector (Daniel Olbrychski) shows up that sets in motion enough chase sequences and plot twists for two films.

Liev Schreiber, Chiwetel Ejiofor, and Andre Braugher offer pedestrian supporting roles, and, once again, you'll be bombarded by an aggressive in-your-face (ear?) soundtrack, this time by the talented James Newton Howard. The good news is the music here is more in the background than, say, in "Inception", and was definitely not as distracting. Also, the production values, as well as the editing by Stuard Baird and John Gilroy, are top notch.

Finally, if you are into the whole spy genre, you'll be pleased that Noyce pays particular homage to the Cold War 60's environment prevalent between the Russians & U.S. If you think this is preposterous in this day and age, remember that this film comes practically on the heels of headline that story a couple of weeks ago involving those Russian spies we just swapped. And, I love the '60's nod to the knife-in-the-shoe-wielding Russian female spy, Colonel Klebb, in "From Russia with Love".

So, suspend total belief at the door (anyone who has been in the middle of midday D.C traffic will still have their eyes rolling witnessing the chase scene a third of the way in as Jolie performs maneuvers that even Spiderman would envy), grab that popcorn, & sit back. And, although you'll be entertained, be prepared to have trouble remembering what the film was all about not too long after you leave the theater. 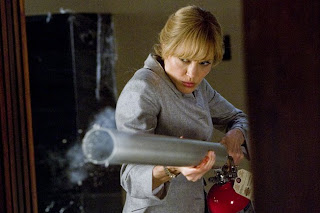 Evelyn Salt (Joie) about to use her home-made weapon 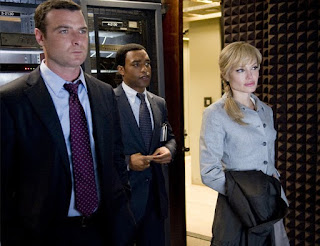