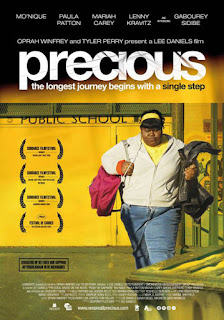 Last year, Heath Ledger gave one of the most memorable performances ever by a male actor in Christopher Nolan's brilliant, "The Dark Knight". As predicted, his posthumous Supporting Academy Award was merely a formality. This year's version, by a female, will undoubtedly be handed over to Mo'Nique on March 7th as her performance as the mother of her abused child, Claireece "Precious" Jones, is another one for the ages.

The independent film, directed & produced by Lee Daniels has been racking up award after award after initially receiving 3 major Sundance Awards when it debuted there last January: the Dramatic Grand Jury Prize, Dramatic Audience Award, & Dramatic Special Jury Prize for Acting to Mo'Nique. One of the most powerful American films I have ever seen, this is a tragic story that, in the end, actually sends a message of hope & possibility in the face of life defined by total despair.

Precious (newcomer Gabourey Sidibe in a touchingly realistic performance) is an overweight abused teenager; impregnated for a 2nd time after being raped again by her father. Threatened and further vocally & physically abused by mom, who treats her child more like a servant, Precious faces continual abuse at school. The only people who seem to care and understand her pain are her teacher (in a wonderfully nuanced performance by Paula Patton) and social worker (a virtually unrecognizable Mariah Carrey who delivers a magnificent performance that will have people forget "Glitter"-if they were unfortunate enough to see it) who work to bring some semblance of beauty and meaning into the life of this child.

As bleak and unfathomable as this all seems, director Daniels and first time screenwriter Damien Paul inject enough fantasy & humor to give a necessary lift to this powerful raw emotional story. And as I pointed out, there is a clear discernible light at the end of this dark tunnel which Precious is traversing so that, at the end, you will walk out of the theater realizing that you have witnessed one of the great films of this or any year. 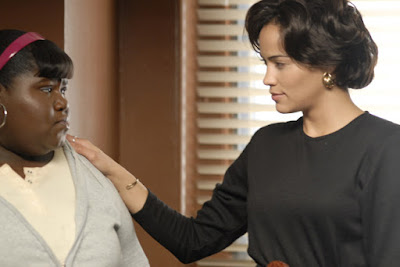 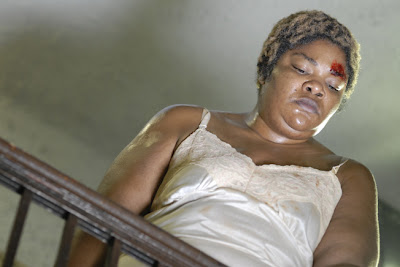 The advance buzz started months ago and the question would be whether or not the film would, or could, live up to all the hype, or would it be one of the most expensive flops of all time?

James Cameron will never be included in the conversation as one of cinema's top story tellers. In fact, I personally wish that he would finally hire a professional script writer for his mega projects. And his story here will remind you of a multitude of films including, as Gabe Wardell, Executive Director of The Atlanta Film Festival informed me just before the release, "Dances with Wolves". However, many great movies of the past have borrowed plot lines & character development. So originality in other facets can still factor into whether the film works or not.

That being said, this ground-breaking dazzler, with its "today" message of a "green" spiritual existence vs. the evil military machine that wants to destroy it, delivers one of the most amazing cinematic experiences I have ever experienced in a darken theater.

Cameron birthed this idea 14 years ago-but he had to wait until technology caught up with what he wanted to portray on the screen. Once it did, it then took him over 4 years to create a universe that is truly unforgettable, by melding live action & CGI utilizing a hook-up to the 3rd largest computer in the world. (Co-producer Jon Landau stated in UK's The Sun that 800 people were used to used to create the digital effects and that "one frame of certain shots, it's 24 frames per second, took 100 computer hours to render. Just one second was 2,400 hours.") The result, especially in 3D, is one that may change the look of films forever.

The year is 2154 and the U.S. is in desperate need of a mineral (cleverly named "unobtanium)" that is found in abundance on Pandora, a moon circling a massive planet. The problem is that the military must deal with the Na'vi, the tailed (Cameron added tails because he thought it was sexy), blue- skinned (because he remarked that green was already taken), 8 foot plus indigenous inhabitants.

To accomplish their objective, and overcome the unbreathable atmosphere, humans have engineered a process that can combine human & Na'vi DNA to create "avatars". The human stays on the ship in a trance-like state while his/her avatar ventures onto Pandora. The goal: have avatars spy on the inhabitants and to ultimately convince them to yield the precious mineral to the military.

When the human earmarked for a particularly unique avatar dies, his identical genetic match is recruited to take his place: paraplegic Jake Sully (Australian Sam Worthington,"Hart's War" & "Terminator Salvation") who is promised an expensive operation to restore his legs should he agree to participate. When Chief Science Officer Grace's (Sigourney Weaver) avatar, who has been teaching English to the Na'vi, joins avatar Sully in the forests of Pandora, pure fantasy movie magic is made.

During his initial venture, avatar Sully escapes certain death from the wild animal inhabitants with the unexpected assistance of Na'vi native Neytire (Zoe Saldana, "Star Trek"). She then introduces him to her tribe where he becomes reluctantly accepted after subsequent visits.

Meanwhile, back at base camp, Col Miles Quaritch (effectively played by Stephen Lang, "Public Enemies") & capitalist Parker Selfride (Giovanni Ribisi in an uncharacteristically bad guy role) are growing more and more suspicious that Sully, on repeated trips to Pandora, isn't quite following the program as instructed. The fateful decision might have to be made to abandon the peaceful means of obtaining the mineral and go for more drastic measures.

Despite that, after about an hour, I figured out where the major plot lines were heading, what makes it most memorable are the sequences on Pandora where Cameron has created visual eye candy that must be seen to believe. And his use of 3D is not your father's or grandfather's 3D. Instead of using the effect to show off the technology and to bring attention to it, Cameron uses the process more to put the viewer in the action-as if you were actually sitting in the middle of the frame that is in front of your eyes. The result is realistic, magical, & extremely powerful.

To add to the authenticity, Cameron hired linguist Paul Frommer (a professor at the Marshall School of Business) to create the 1,000 word Na'vi language to resemble no other human language. And, veteran composer James Horner, as he did for "Titanic", has produced a beautiful haunting score that fits perfectly with the action.

Cameron referenced a line in "Titanic" when he accepted his Academy Awards in 1998, proclaiming that he was "King of the World". You can now anoint him king of 2 worlds. 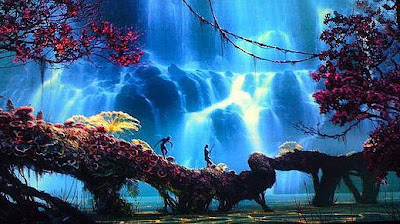 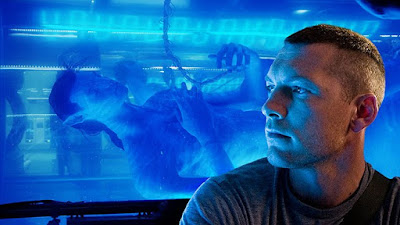 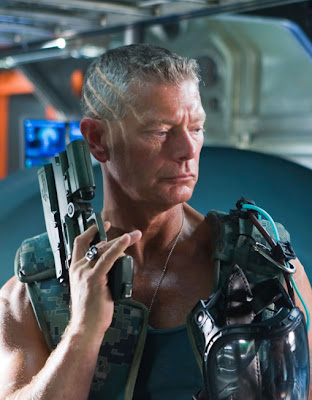 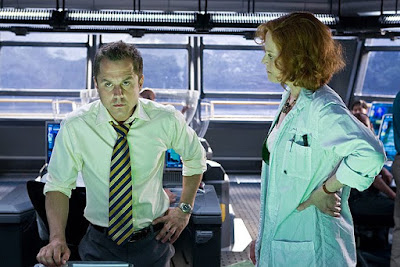 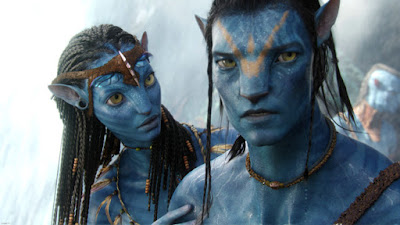 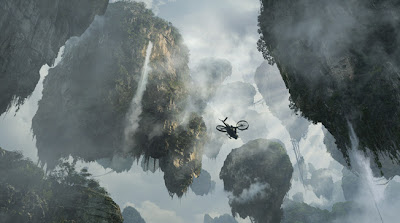