Christmas comes in December.  And so does the release of the majority of the best films of the year - many of which will be vying for The Academy of Arts and Sciences biggest prizes come February 26.  Sure to be leading the list is this masterpiece and third directorial effort by Whiplash writer and director, Damien Chazelle who has successfully captured the old Hollywood musical genre utilizing  a modern day milieu replete with style, music, dance, and romance.

Ryan Gosling (who is quickly proving that no role is above his talent or capability) is Sebastian -  a down-on-his-luck pianist whose love of jazz knows no bounds or monetary future.  His dream: opening his own jazz club.

Emma Stone (nominated for Best Supporting Actress in Birdman) is Mia - an aspiring actress who pays the bills as a barista on a studio back lot. Her dream:  making it as an actor in Hollywood.

Their paths cross over several instances during the first reel and not always in favorable circumstances until one night the spark finally ignites inside and outside the Griffith Park planetarium (Chazelle's nod to an iconic Hollywood movie landmark).  From there, over the course of a year (as the director humorously winks to the audience by dividing the action into four seasonal chapters with nary a change in the L.A. weather) their budding relationship takes the tensioned reality most face when career and romance clash and hard choices have to be made between the two.

Along the way there are a couple of spectacular exhilarating musical sequences counterbalanced with a few quieter ones involving the two principles.  Gossling and Stone (this marks their third film together) will never be mistaken for Astaire and Rogers, and their singing abilities are pedestrian at best.  However, their skills, or lack thereof, is part of the wonderful charm of La La Land.  Afterall, they are representing everyday folks whose dreams of "making it" mirror the majority of us whose singing and dancing abilities are equally unremarkable.

Notable is a haunting score by Justin Hurwitz infused with terrific song lyrics by Benj Pasik and Justin Paul-all nicely interspersed among Chazelle's intelligent script.  Special mention also to Whiplash's Academy Award winning film editor Tom Cross, who is likely to be nominated once again for his superlative work here.  Also on display are all too brief but appealing supportive work by Whiplash's Best Supporting actor J.K. Simmons who plays Sebastian's boss at a piano bar,  Rosemarie DeWitt who plays Sebastian's contentious sister, and musician John Legend who convinces Sebastian to join his pop band.

A word of caution:  do not be late (no spoiler alert here) as the first ten minutes are almost worth the price of admission.  And bring a Kleenex or two as the touching conclusion had this reviewer practically emotionally overwhelmed.

The film has already garnered numerous awards including the New York Critics Circle Award for Best Film and the Audience Award at this years Toronto Film Festival.

As 2010s Best Picure The Artist did in resurrecting a long forgotten movie art form-the silents, La La Land is a gloriously successful return to Hollywood musicals of the past.  Chazelle, who said it took him to six years to bring his musical idea of love vs  ambition to the screen, mentioned in an interview that he wanted the audience to float out of the theater rather than walking out.

I am still floating.

UP NEXT:  COVERAGE OF THE 2ND ANNUAL DC INVESTIGATIVE FILM FESTIVAL 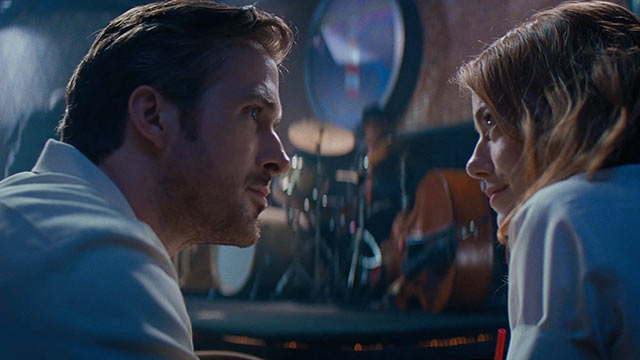 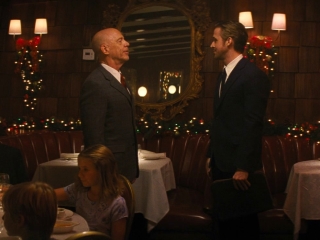 Bill the boss (J.K. Simmons) discussing his preferred choice of music to Sebastian
No comments: Links to this post