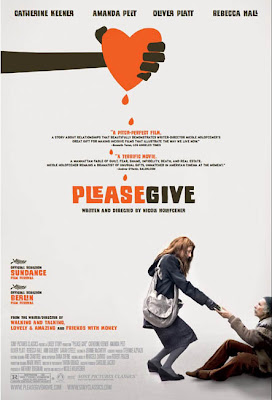 Phew! After the mindless action flick from the night before it was a welcome relief to catch up on a film genre that is more to my liking. An easy, character-driven realistic comedy/drama from Nicole Holofcener, the talented indy director who has been directing nothing but critic favorites since 1996 with "Walking and Talking". Then, beginning in 2001, she added screenwriting to her directing credit for "Lovely and Amazing", followed by "Friends with Money" (which was the opening night movie at the 2006 Sundance Film Festival and, although not one of my favorites, it became her most financially successful move to date), and now the wonderful "Please Give" which was released last April. And, despite currently receiving meager box office results, I highly recommend putting this one on your list.

Catherine Keener (her 3rd film in a row with the director) gives yet another standout performance in the lead role (she's been quite busy this year appearing in "Cyrus" as well as "Percy Jackson & the Olympians: The Lightning Thief"), with another competent veteran, Oliver Platt, as a married couple, Kate & Alex, who run a furniture shop populated with the belongings of dead people. Marty is the straightforward, happy-go-lucky partner who's in it for the bucks, while Keener seems to have a deep-rooted moral conscience in the buying and selling end of her business. She's also quite the philanthropist-even offering money (paper-not coins) to homeless and the not-so-homeless folks she happens upon on the streets of NY. (There's a funny scene involving a person in front of a restaurant that I won't spoil here.)

They live together with their teenage daughter, Abby (Sarah Steele), who's hell-bent on getting expensive designer blue jeans. They live next to the apartment occupied by the cantankerous aging Andra (Ann Guilbert-a wonderful character actor whom Woody Allen would envy). She's being looked after by her two visiting granddaughters, sisters Rebecca & Mary (Rebecca Hall, who appeared in Woody Allen's "Vicky Cristina Barcelona", & Amanda Peet, respectively). The timid, caring Rebecca is a radiology tech while narcissistic Mary works at a spa giving massages and facials.

Meanwhile, Kate & Alex are doing so well in their business they plan to expand into Andra's pad as soon as she's left the planet. The plot is set in motion when they decide to finally get to know their neighbor by inviting Andra and her granddaughters over for dinner to celebrate Andra's birthday.

The character development and interactions that ensue take a little while to get going, but once in motion, the story takes off and you'll find yourself thoroughly involved as the director delivers on many levels. The script subtly & humorously raises your consciousness as to what is most important in life and relationships without being judgmental & preachy-all of which adds Nicole Holofcener to the growing list of insightful writers/directors working in today's cinema. A wonderful film!

The DVD release is scheduled for July 29th. 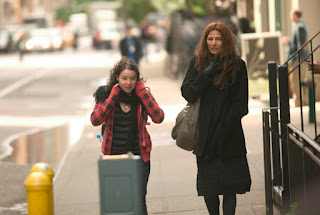 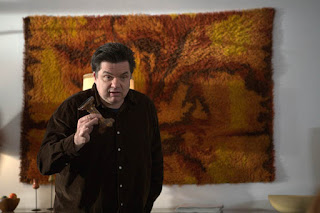 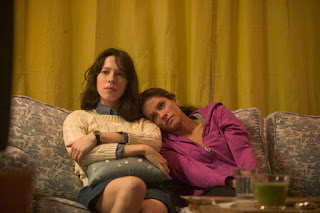