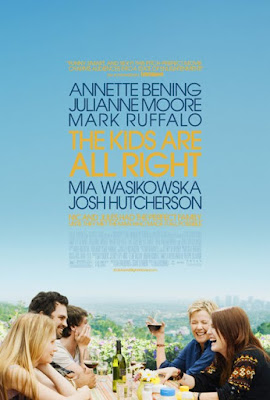 Director/writer Lisa Cholodenko's previous narrative efforts were 1998's "High Art" & 2003's "Laurel Canyon", both of which received generally mixed reviews. However, this her third film, she collaborates the writing duties with Stuart Blumberg (2004's "The Girl Next Door") and the results, I predict, will be multiple AA nominations for this terrific ensemble work.

Annette Benning (on the heels of her phenomenal acting in "Mother and Child") stars with Julianne Moore (who also gave a stellar performance in last year's "A Single Man") as Nic & Jules, a long time married lesbian couple raising their 2 kids whom each separately produced using the same surrogate dad. The kids, Joni & Laser, perfectly played by Mia Wasikowska ("Alice in Wonderland") & Josh Hutchinson, are curious as to who their real father/sperm donor is. When Joni (named after the pop/folk singer Joni Mitchell) investigates and they connect with said donor, they set up a lunch date with Paul (played by veteran Mark Ruffalo in a sure fire breakout role).

However, mucho complications ensue when Paul, a cool dude who has never married and owns an organic food restaurant, agrees to meet the surrogate moms-also agreed to, although reluctantly, by said egg donors. Prior to Paul entering the scene, there is already a mid-life crises in full bloom in the steady, typical, bringing-up-kids atmosphere provided by the controlling Nic and the subservient Jules. Now, everyone's world is about to be rocked when Paul enters the picture.

Although "The Kids are All Right" is a "comedy", the smart dialogue & plot situations are believable no matter the sex of the parents. Each character and their motivations are realistic and heartfelt-making this film even more special.

A few words about Mark Ruffalo: His name may not be recognizable but any regular moviegoer will know his face. Most recently seen in "Shutter Island", he's been present in a multitude of films & TV productions and genres. Steady & sure in every role I've seen him in, Paul is the role that may finally put him on the actor A-list. Ruffalo gives a beautifully nuanced performance that, as I stated at the beginning, will undoubtedly lead to one of many nominations this film will bring come Oscar time next year. 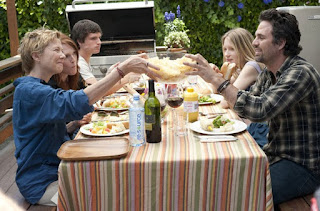