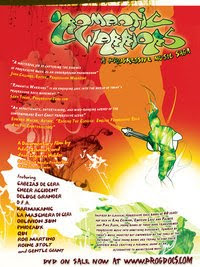 If you ask most people "What is progressive rock?" more often than not you'll get blank stares. However, if you mention such 40+ year-old classic rock groups such as Pink Floyd, Yes, King Crimson, Jethro Tull, & Emerson, Lake & Palmer, suddenly you'll get a nod and a response. These groups were the pioneers of a genre of music that has long been considered anti-mainstream and not readily accessible in this day and age of pop music sensibilities. With its roots going back to the late 60's and early 70's, this form of music culls together rock, classical, jazz, and world music that is still thriving-despite lacking the publicity, advertising, & generous airwaves enjoyed by its more popular accessible pop counterpart.

Award-winning German documentary film maker Adele Schmidt and her partner and prog fan, Peruvim-born José Zegarra Holder, have set out, and wonderfully succeeded, in documenting the talent and artistry of worldwide progressive rock musicians that will gleefully introduce this art form to newcomers, and will explain why prog music should not be ignored. Although the film is chock full of history and interviews, the real reason for tuning in is the music. Skillfully edited, the music is fabulously mixed to showcase the incredible talent that defines what this musical style is all about.

It seems proponents of prog rock in the U.S. have settled for displaying their wares on the U.S. East Coast. Three festivals are showcased: ROSfest (Rites of Spring) held in Pennsylvania, ProgDay (purported to be "the world's longest running progressive rock festival") held at Storybook Farm near Chapel Hill, North Carolina, and NEARfest (North East Art Rock festival), the largest progressive music festival in the U.S. currently held at Bethlehem, Pa. in June. You'll see bands performing at both locations throughout the doc. A forth location is right here in Baltimore at Mike Potter's Orion Studios where he constantly invites international prog groups to practice & perform throughout the year.
Although many bands are shown performing, four are prominently featured: Cabezas de Cera, D.F.A., Cheer-Accident, and Deluge Grander/Dan Britton. Qui, Phideaux, Karmakanic, and La Maschera di Cera are given shorter, but entertaining, film time. Tying it all together for the older folks is ex-Gentle Giant lead guitarist Gary Green, who gives insightful commentary on progressive music throughout the documentary. "Ancient" 1974 clips of GG's performance will give the viewer equal helpings of background & nostalgia.

At the screening I attended at Orion Studios on December 4 (which featured a wonderful pre-screening performance by Chapman Stickist Rob Martino-who is featured in the film), I asked Adele about the title. She responded that it fit the mindset of the musicians who have accepted the "romance" of playing the music they love with total disregard to financial or commercial success, while being thoroughly engaged in the struggle to present their music & gain acceptance with the general public. This documentary should go a long way in accomplishing that goal.
The film is currently making the festival circuit but is now available for purchase at Amazon.com as well as at this site.
No comments: Links to this post