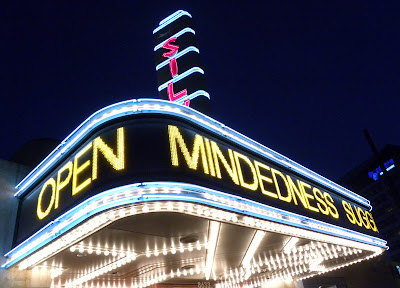 After 2 heavy emotional, albeit outstanding, films to start the day yesterday, it was a welcome relief to have my mood lightened to start this one. Besides the cinema, my other two passions in life are music and sports. So, it really made sense that the combination of the two would appeal to me in a big way. I found that combination in professional figure skating-where artistry and skill are performed to all styles of music. I first found myself naturally drawn in to Olympic competition. Then for years I attended The World Professional Figure Skating Championships outside of D.C. As a result of the Tonya Harding/Nancy Kerrigan knee whacking fiasco in 1994, my interest in the sport waned considerably where now I've limited my interest only during the Olympics where it all began. Since I haven't been following the sport closely for years, I'm not clued into the current crop of skaters like I used to be. Would this detract from the next film? As it turns out, no, because "Pop Star On Ice" (*** 1/2-85 minute), a portrait of one of the skating world's more memorable characters, Johnny Weir, doesn't demand familiarity or even a love of the sport. What it successfully does is introduce you to the rigors of what it takes to compete in a sport where individuality can work against you in such a subjective atmosphere of competitive skating. Ironically, Weir's interest in ice-skating began the year I got turned off to it, in 1994 when Oksana Baiul won in Lillehammer. The film is as much about him as it is about his long-term coach Priscilla Hill (which may not be a good thing as you see her play up to the cameras way too often for my liking) and you see the ups and downs the demanding training & competition has on their relationship. But it also gives one a ring-side seat, an up-close-and-personal look into the 3 time U.S. Champion, who is as much an enigma as he is talented. A flamboyant soul who is as much a pop star (hence the title) as athlete, the film is a hoot as you follow his career from its inception through early 2008, both on and off the ice. His best bud Paris is around (the scene of him being "interviewed" by Paris in a bubble bath is typical of his carefree spirit) to offer support and companionship through all the trials and tribulations. We soon see that, despite all the obvious talent, it is constantly being sabotaged by Weir himself-be it a lack of focus, the inability to devote the necessary effort to sufficiently train, or his failure to eliminate all of the outside distractions. Being his own person means being his own worst enemy and next year's Olympics will probably be his last chance to win it. The movie is fast paced and amusingly entertaining and informative for most of its 85 minutes. The film will air on The Sundance Channel on December 28th, followed by a 8-part reality series ("Johnny Be Good") which begins where "Pop Star On Ice" ends and will lead up to the Olympics including a post-Olympic episode.

Next was one of the strangest but also one of the most fascinating works I've ever seen: "The Windmill Movie" (****-80 minutes). Richard P. Rogers was a Harvard professor who made independent & nonfiction films for the Smithsonian Institute and PBS. He also documented his own life for over 25 years with the hope of someday, somehow making sense of his Hampton Waspish upbringing by editing the more than 200 hours of footage to produce a self-portrait. Unfortunately, Rogers succumbed to cancer in 2001 at the age of 57, leaving the enormous editing task to his former student and friend, freshman director Alexander Olch and Roger's wife, noted photographer Susan Meiselas. The film makes no mention of Roger’s accomplishments but instead is a mosaic that focuses on his insecurities, his womanizing, and his dislike for the social class in which he was raised. Add in a history of family mental illness, and extraordinary video of his larger than life mom (you won’t stop thinking that Edith Beale from “Gray Gardens” might be her best friend) and this is one film that will stay with you. Less successful is the inclusion of Roger’s friend Wallace Shawn who acts as an occasional stand-in. However, Olch successfully supplies his own written narration over some of the visuals. Overall, this is a captivating work of a conflicted man that is relentless in portraying him as a success in just about everything except in reconciling his own inner demons. The film has already opened in limited release.

Watching the world premier of "Dancing with the Devil" (***-101 minutes), made by Oscar (1996's "Anne Frank Remembered"), Emmy, and BAFTA award winning director and producer Jon Blair, I kept wondering why some directors would risk their life to bring a story such as this to the big screen. Blair takes us into the favelas of Rio de Janeiro as we observe one of the bloodiest urban conflicts on the planet where constant battles are being waged between the drug lords, who actually control these large slum areas of the city, and the police. Blair somehow gets unmasked drug traffickers to openly talk about the illegal activities they promote and about the police, some of whom are just as corrupt. The police win occasional battles (some of which were filmed by one brave film crew!) but are clearly losing this war. The film mainly focuses on 3 individuals: inspector Leonardo Torres, one of Rio’s drug squad good guys who is determined to clean up the hell around him; drug lord Juarez “Spiderman” Mendes da Silva who has vowed to quit his position and to ultimately serve God-someday; and, the most intriguing personality, drug trafficker-turned-minister, Pastor Dione “Johnny” dos Santos, who walks unscathed though the violence as he constantly preaches the gospel to these low-lifes, trying fervently to convert them. I felt a little too much time was spent following Pastor Johnny preaching and moralizing to the inhabitants. But, overall, this was an amazing piece of harrowing filmmaking. At the Q&A the director updated the doc stating that several of the drug lords depicted have been killed since the filming ended-including Spiderman who never took that opportunity to lead a more peaceful life.

It was time to go from the brutal world of drug wars into the brutal world of plastic surgery. “Youth Knows No Pain” (***-88 minutes) by award winning director Mitch McCabe, explores our society's obsessiveness with staying youthful while grappling with her own decision to go under the knife. Part of the film focuses on her late father, a noted old school plastic surgeon who tragically died in a car accident in 1998, four years before botox was approved by the FDA and before the explosion of, what is now, the $60 billion anti-aging industry. Much of this coverage includes a lot of home movie footage shot before his death. Part of it also focuses on several personalities she uncovered in her journey to cover a topic that, at times, goes beyond mere vanity issues. Take 50ish Dallas resident, Sherry Mecom. We see her throughout the doc showing off her latest enhancements and corrections, all the while talking so openly that you’ll feel as if you’re a fly on the wall in a shrink’s office. Or Norman Deesing, whose visage has so surgically become the spitting image of Jack Nicholsen that we see him, giving out “his” autograph. Or Houston plastic surgeon Dr. Franklin Rose which includes several scenes with his model daughter Erica-who we learn is not surgically enhanced. Interspersed are animated explanations of several of the surgeries and a brief, but graphic, you-are-there, virtually unwatchable, live hair transplant procedure. She even covers the sham of overly priced cosmetics that make claims that have never been proven. But all of this is used to document her personal uncertainty to finally go for it in the end. This is a light generally amusing take on the topic and, although you probably won’t learn anything new, the ride is certainly worthwhile. The HBO Documentary will air on the network on August 31.

Last up was the east coast premier of “October Country” (*** ½-80 minutes), a no holds barred, blood and guts peak into one incredibly dysfunctional family in upper state N.Y. Directed by first-time filmmakers Michael Palmieri, who cut his chops working with cartoonist Gary Trudeau and who directed a multitude of music videos, and Donal Mosher, whose family is the focus of the proceedings, we are introduced to 4 generations of this working-class family. And what a family it is! There is mom Dottie who is married to Vietnam Vet Don who clearly suffers from the effects of post-traumatic stress disorder. Her daughter, Donna, has endured a couple of abusive relationships. Then there are Donna’s 2 daughters: Daneal, a teenager with a baby, Ruby, whose father, Daneal’s ex-husband, is a wife abuser himself; and preteen Desi, whose father is in prison. So it becomes very clear early-on that the Mosher women have trouble picking suitable mates, to say the least. Is this something being passed on generation after generation? Is it a learned behavior? Or, is it just bad luck or lack of choices in their community? Whatever the reason(s), there is room for hope in this quagmire of human dysfunction in the presence of Desi who seems to “get it” and maturely and intelligently comments way beyond her years throughout the film on the craziness around her. As if these characters weren’t enough, we are then introduced to Denise, Don’s estranged sister who, besides being a total loner, is a practicing witch who likes to hang out in a cemetery with her ghost friends! Add in a foster child (!) who is a practicing kleptomaniac, and you would think this was a narrative from a bad grade C movie. Beginning on Halloween (a fitting holiday for these folks) and ending a year later on the same celebration, the film is incredibly intimate-helped immeasurably, I’m certain, by the behind the camera presence of the outsider Mosher (he is never referred to and doesn’t appears on-camera) who somehow escaped the drama encircling this family by leaving & living his life on the West Coast far away from his roots. A powerful account that, sadly, may just be a microcosm of too many such families in America. 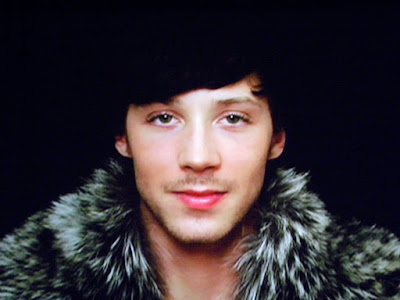 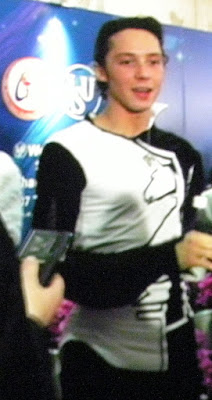 Scene from "Pop Star On Ice" 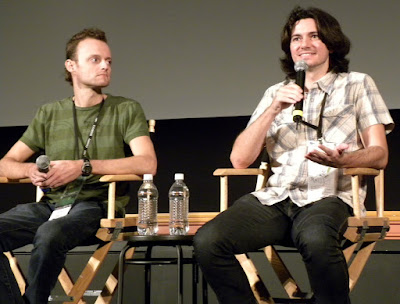 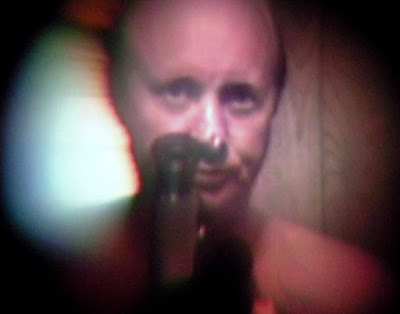 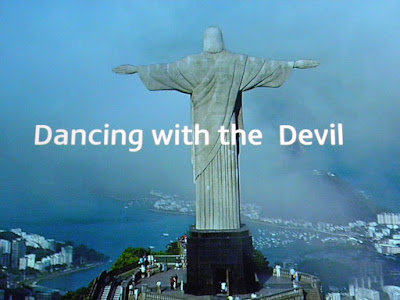 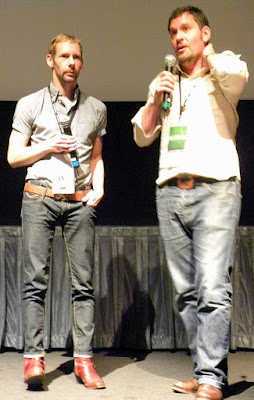