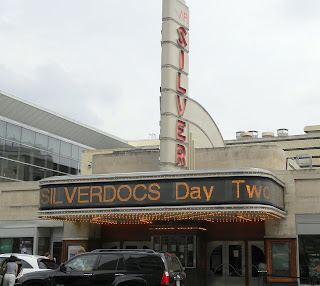 Each year SILVERDOCS honors a filmmaker who has made a significant contribution to documentary film making. Named in honor of the 4-time Academy Award winning director who produced over 100 documentaries, the Charles Guggenheim Symposium this year honors Albert Maysles.

In support of the Symposium scheduled for Thursday night, the festival is presenting a compendium of Albert's works throughout the week (his brother and long time partner David died in 1987). Kicking off the 2nd day is the first of 2 Maysles shorts programs which includes his earliest foray into the genre and which give a glimpse into the genius that would produce such ground breaking landmark films such as "Salesman" (1968), "Gimme Shelter" (1970), and the 1976 Academy Award winner, "Grey Gardens".

Albert first became interested in documentaries when he decided to travel to Russia in 1955 to film in mental hospitals. "Psychiatry In Russia" (14 minutes), which focused on the health care system in Russia, was a natural subject as he had a graduate degree in psychology and was teaching it at Boston University. However, the 14 minute short spurred him on to switch careers. "Russia Close-up" (1957-3 minutes) was another Russia based film in which he turned his camera on to the people and places he encountered during a cross-country motor scooter ride through the Soviet Union. He and David were hired by NBC to do a piece for their news program "Update" that showcased Anastasia Stevens, an American dancer performing in the Bolshoi Ballet. "Anastasia" (1962-8 minutes) was noted for taking place during the height of the Cold War and was produced by noted screenwriter Bo Goldman. Next up was "IBM: A Self Portrait" (1964). This 35 minute piece gives a fascinating early look into the company that is one of today's giants. The program ended with one of their earliest forays into the world of celebrity with "Cut Piece" (8 minutes) a curious 1965 short shot in New York's Carnegie Hall which documents a Yoko Ono abstract piece. Audience members, one by one, walk on stage and confront a sitting Ono and, with scissors in hand, proceed to cut off a piece of her clothing.

Next up was the wonderful family, coming-of-age portrait of an African-American girl whose adopted parents just happen to be Jewish Lesbians and whose siblings included a mixed- raced brother & a Korean-American toddler. "Off and Running" (*** 1/2-75 minutes) features Avery Klein-Cloud's search for her identity, in general, and her birth mother, in particular. Despite growing up in a loving nurturing household (Avery calls it "the United Nations"), Avery's search is affecting everything in her life: her studies, her track aspirations, and, more importantly, her relationship with her brother and parents. Director Nicole Opper's cameras are there to record some of the most intimate moments of Avery's life. The drama that unfolds is heart wrenching and heart breaking as we watch her deal with emotions that most of us will never imagine or experience. The film is scheduled to be shown on the PBS series P.O.V. in 2010.

One of the festival's special programs was, indeed, a very special event. It would have been more so had the scheduled appearance of Muhammad Ali come to fruition. Unfortunately, Ali was a late minute scratch. However, the east coast premier of "Facing Ali" (****-98 minutes) didn't disappoint. Award winning film, novelist, screenwriter and producer, Pete McCormack's ("Uganda Rising") stunning masterpiece chronicles Ali's brilliant career. Using archival footage, and solely the spoken words of 10 of his rivals (there is no superfluous narration), you will undoubtedly obtain a new found understanding and respect for this cultural icon that many consider the greatest heavyweight champion ever. Covering his career from 1963-1980, the personal accounts of such fighters as George Chuvalo, Henry Cooper, George Forman, Joe Frazier, and, even Leon Spinks are equally touching, comical, insightful, and, ultimately inspiring. McCormack has integrated the fight clips and interviews with an editing style that never bores and provides rare insight into Ali "the man", as well as Ali "the fighter" that will keep you thoroughly entertained throughout. It is truly heartbreaking to see and hear these legendary boxers (the use of subtitles is an absolute necessity as years of fighting have taken quite a toll on these legendary figures). However, their stories and recollections of a man who now suffers the affects of fight-induced Parkinson's disease (most likely caused by the repeated blows to the back of his neck), will have you enthralled. The fascinating after film discussion, moderated by USAToday sportswriter David DuPree, included Pete and producer Derik Murray. Ali has always been the director's idol and doing the film was a natural subject for him to tackle. When asked which boxer was the hardest to track down, without hesitation, he said Leon Spinks, who, after becoming homeless just over a decade after winning the championship title and bouncing around the country after that, he found him living in Columbus, Nebraska. The film was picked up by Lionsgate who will release it in New York and L.A. on July 10th. Hopefully, the positive buzz that it is sure to generate will cause the distributor to ultimately release it nationwide shortly thereafter. 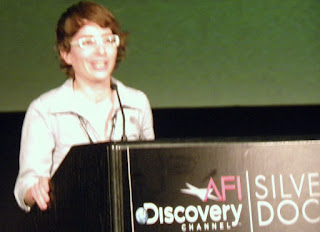 "Off and Running" Dir. Nicole Opper 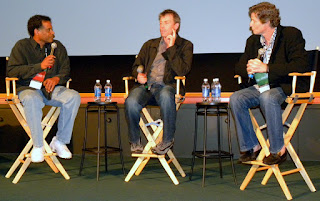