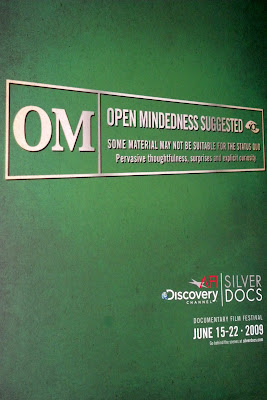 First up today was a film dealing with a different twist on the Katrina tragedy. There have been several outstanding docs on the subject, the Academy Award nominated Trouble The Water being one that is probably leading the pack. However, rookie director Geralyn Peranoski, who actually fostered a Katrina dog, has made a truly unforgettable and moving examination about the reuniting of the staggering number of pets (over 15,000) that were lost or abandoned (some forced to do so by local authorities) by their New Orleans owners who themselves were struggling to evacuate & survive the hurricane. The East Coast premier of "Mine" (****-83 minutes) investigates this little discussed aspect of the disaster from 3 different perspectives: those who left their pets behind, those nationwide folks and organizations who rescued those pets, and those people across the country who fostered and/or adopted them. It was a massive humanitarian effort when non-residents entered the city to rescue the myriad of animals that were left behind. When the pet owners came back to New Orleans, they, of course wanted to find their pets. However, to achieve that involved an incredible amount of legwork, not to mention luck, from people who mainly devoted their time and energy to reunite pet with owner. The film concentrates on 5 residents whose lives were devastated by Katrina-only to endure further heartbreak trying to locate, then re-obtain, their precious companions. It seems that, in some cases, the pets are actually found, but their new adoptive owners refuse to return them to the original owners-having emotionally bonded to their new pets which they have taken care of, in some cases, for years. I found myself yearning for the reunion, yet, I understand the trauma the new "owners" had to endure if they returned the pets, and the pathos I now felt for them. The incredibly moving Q & A featured one of the subjects of the film, New Orleans resident Jessie Pullins as well as Gerolyn and local producer Erin Essenmacher. Where the prologue related what had happened to Jessie's quest to obtain his beloved dog J.J., Jessie was there to update the story in a big way positive way-to a standing ovation from the audience. The filmmakers are currently working on a distribution deal. Be certain to bring a hanky or two!

I was able to slip into The Awards ceremony between films and here were the announced results:
OCTOBER COUNTRY Wins Sterling US Feature Award
MUGABE AND THE WHITE AFRICAN Wins Sterling World Feature Award
12 NOTES DOWN Wins Sterling Short Award
Special Jury Mention went to SALT
Music Documentary Award Goes to RISEUP
Special Jury OMention went to SOUL POWER
OLD PARTNER Wins The Cinematic Vision Award
The WITNESS Award Goes to GOOD FORTUNE
Writers Guild of America Documentary Screenplay Award to OFF AND RUNNING
ACE Grant Winner is CINEMA CHIMP
Short Audience Award Goes to 12 NOTES DOWN
(Feature Audience Award Goes to THE COVE and was announced Sunday night)
I was really anticipating the next film which took home this year's Sundance Audience Award. If I thought "Mine" was an emotional trip, it was nothing compared to the next film. Director Louie Psihoyos' "The Cove" (****-94 minutes) is not only a terrific documentary, it is one of the most important investigative pieces you will ever see. Rolling Stone called it a cross between Flipper & "The Bourne Identity". I'd say between Flipper and "Mission Impossible" is a closer description of this masterful work. Psihoyos is one of the world's top photographers, working 18 years for National Geographic and shooting covers for the world's top magazines. Along with his partner, Jim Clark, he founded The Oceanic Preservation Society which is dedicated to protecting one of our most precious resources: the oceans. A few years ago, my sis turned me onto an award winning independent film entitled "Lolita: Slave to Entertainment" focusing on the abuse of killer whales at Marine Parks. "The Cove" begins by touching on a similar situation involving creatures that some say are as intelligent, if not more so, than humans: dolphins. We meet Ric O'Barry who for 3 years in the '60's naively trained the 5 TV Flippers which started the multibillion-dollar aquatic industry. He quit this job when the #1 Dolphin, Cathy, in a fit of depression, committed suicide in his arms by closing its air hole. From that point on, Rick began a life-long crusade to free captive dolphins. We meet him at the film's start traveling incognito around Taiji, Japan. The Japanese, you see, are onto him, as they are trying to hide from the world their slaughter of thousands of dolphins each year off the coast of Japan while selling the prize catch to aquatic parks for up to $250,000 each. And with the mercury content in dolphins climbing, their human consumption appears to be incredibly dangerous. So what better way for them to make even more money by labeling it as whale meat and selling it to Japanese schools. In pursuit of exposing this insanity to the world, O'Barry recruits a team of aquatic professionals: underwater sound and camera pros, special effects artists from Industrial Light & Magic, marine explorers, and environmental activists-all trying to document the tragedy for the entire world to see. The last half hour of the film will rival any suspenseful action narrative Hollywood could ever produce! And the result will have you on the edge of your seat while you witness one of the greatest crimes man has ever perpetrated against nature. The cinematography and score is as stunning as the horror on screen. The film should elicit a positive proactive response from most everyone who screens this masterpiece. "The Cove" is having a limited release on July 31st by Roadside Attractions and Lionsgate.

The closing night film was one that particularly hit home to the attending locals: the world premiere of "The Nine Lives of Marion Barry" (** 1/2-78 minutes). The doc by noted directors/producers Dana Flor & Toby Oppenheimer attempts to cover why the 73 year-old controversial political figure, to this day, continues to draw support and garner votes time and time again from the D.C. electorate-despite a career marred by a drug bust (he was given 6 months in jail) & tax evasion conviction. You see his political life rise from being a D.C civil rights activist and defender of the poor (author and journalist Harry Jaffe stated he had the potential to be Martin Luther King Jr.'s successor) to his election as mayor, only to be disgraced, and then elected mayor again. Finally, backed by the majority of the residents of D.C.'s Ward 8, he becomes elected to the City Council in 2004-in a landslide, no less! His 40 year political career is a real head-scratcher to any outsider but makes sense within the context of the political climate in a city with a black majority. The filmmakers, structured the film with numerous flashbacks from the scenes that show him campaigning in 2004. Although the doc is slickly produced and edited, little light is shed on just how this morally corrupt dude has continued to politically exist other than vague references to his own poor Mississippi background and how he might relate to the people who voted for him. Instead this is a rehash (it almost seems as if it was made to put him in the best possible light) of information that is old news for anyone who lives in the area. The panel discussion afterwards was as lame as the film in which the panel (consisting of the filmmakers, Civil Rights activist Lawrence Gyot, activist Dorothy Brizill, NBC DC Channel 4 Newsreporter Tom Sherwood, & NPR news analyst Juan Williams) seemed intent on putting out a positive spin on Mr. Barry and his influence on the D.C. populace (maybe because he was in the audience). When he was finally introduced, Barry received a standing ovation (much different from the reception he received outside prior to the screening when you could hear shouts of "shame, shame!" upon his arrival) and then spoke briefly about the media and the ups and downs of his life. The documentary will be shown on HBO on August 10th. 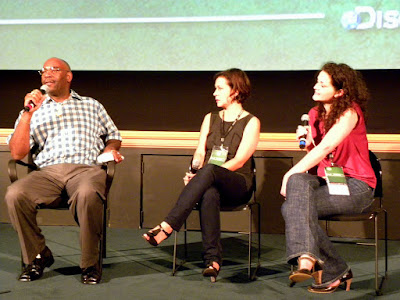 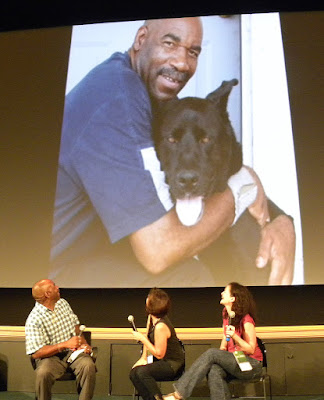 Jessie & J.J. on the big screen 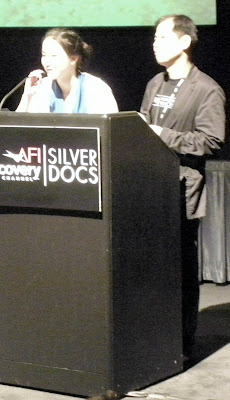 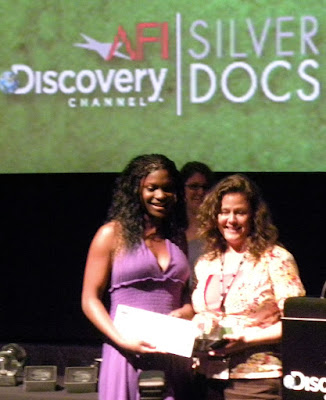 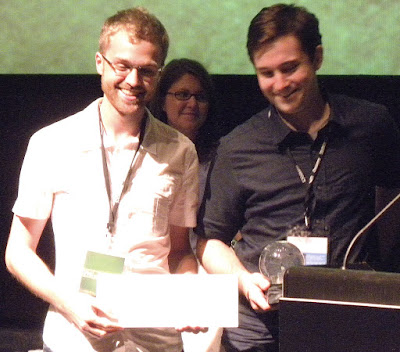 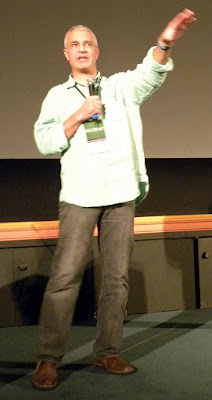 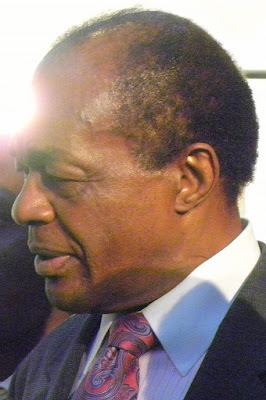 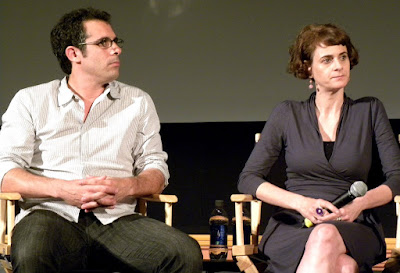 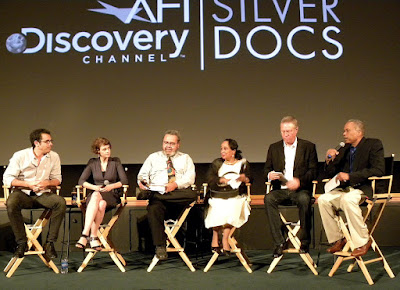 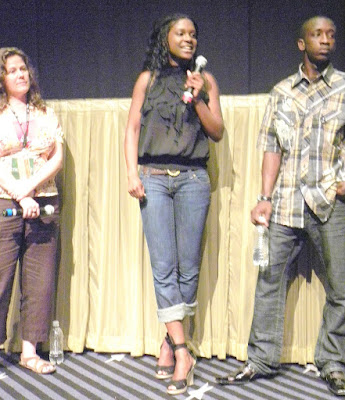 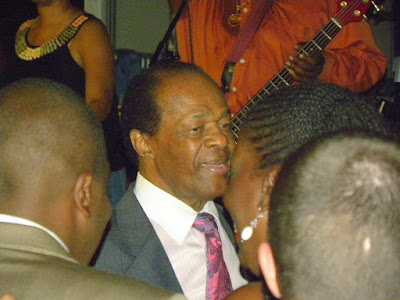