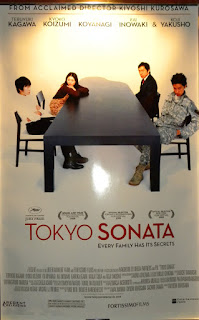 Off to Cinema Sundays at The Charles for their latest offering. Director Kiyoshi Kurosawa (no relation to the legendary Japanese director by the same surname) is best known in the U.S. as concentrating in the horror genre (2001's "Cure" & 2006's "Pulse"). Here he concentrates on a different horror that is currently being experienced in real life throughout the world: the current state of the economy and how it is affecting the job market in general, and the family unit in particular.

Merriam-Webster defines sonata as a "an instrumental musical composition typically of three or four movements in contrasting forms and keys". Here he has produced a literary composition in separate parts that are each distinct yet interconnected in a way that, by the conclusion, it may or may not give hope not only to this family but to everyone facing these dire times.

The tale begins as we see businessman Ryuhei Sasaki (Teruyuki Kagawa) being fired in favor of a younger worker. To avoid the shame, he begins a charade to hide his unemployment from his wife Megumi (Kai Inowaki) and 2 sons by dutifully leaving for "work" each morning-only to wander the city looking for employment while occasionally stopping to eat at a local soup kitchen where he joins other businessmen standing in the same line.

Other story lines are followed. The younger son (Kai Inowaki) just happens to be a blossoming child prodigy on the piano (discouraged by the stressed father). The older son (Yu Koyanagi) is about to join the U.S. Army to obtain American citizenship. Then the tension is upped when Megumi is kidnapped by a bungling home intruder.

We think we know where all these story lines are heading. But Kurosaw (who co-wrote the script with Max Mannix & Sachiko Tanaka) always surprises by refusing to telescope the outcomes.

Don't expect great action. The story is slow and meticulous as it reflects Japanese society that most U.S. citizens are not aware of. Our lives and the way we deal with adversity is far different that what you will see on the screen. Yet, the wonderful acting and the way the film gives us a window into Japanese society makes the ride all that more interesting.

Are you going to review the MD Film Festival again this year? I hope so--I always look forward to your reviews.