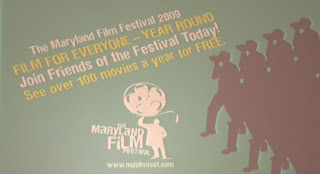 Opening night at the 11th annual and this year's program is becoming somewhat of a MFF tradition: nothing but shorts. Started in 2002, and continuing each year beginning in 2004, Festival director Jed Dietz has devoted opening night as an homage to the short film and may be the only festival in the world to present its opening night program to this unique and little appreciated art form.

An added treat is the addition of host comic/director Bobcat Goldthwait, who is on hand to present his own short film. (His much buzzed about new feature, "World's Greatest Dad" starring Robin Williams will have its Maryland premier on Saturday night.) Goldthwait has long ago abandoned his manic comic persona but not his comic sensibilities as he kept everyone laughing throughout with his sharp wit.

First up was "Goldthwait Home Movies" (***1/2). It's the fictional 40 year reunion of the "original" cast. Actually, it's Bob's home movies while he was growing up with current generally hilarious voice overs to fit the "action". It's a hit-and-miss affair that mostly hits-so much so, that a lot is lost amid all the laughter. A great way to start off the program!

The rest of the lineup included:

-the experimental "The Bellows March" (***) in which director Eric Dyer explores the use of a process he used in 2006's MFF opening night short "The Copenhagen Cycles". It spans the history of the moving image combining the pre-cinema zoetrope and modern digital video.

-"Done in One" (***1/2) is a 7 minutes short done in a single shot with no editing (hence the title) which tells the tale of a guy who reflects on why he received an unexpected beat-down and, as a result, discovers how it all came to be. Ingenious perfectly timed interacting action produce the answers that come at the end/beginning.

-Michael Langan's "Dahlia" (***) is most notable for its score: vocal percussion set to the rhythm of life in the city.

-"Trepan Hole" (**1/2) by Anday Cahill uses stop action animation that goes on a little too long and makes those 6 minutes seem a lot longer.

-"Grand Teton" (**) by director Julia Kim Smith takes a Korean-American family's video portrait in the Grand Teton National Park and reunites them in the same spot 35 years later. An interesting concept, but, unfortunately, it didn't sustain my interest over the 5 minutes running time.

-The best of the lot was clearly Marc Kess' brilliant "Mildred Richard" (****). Kess uses the audio of a 1940's radio production to recreate the crime story using his own visuals. What makes it even more remarkable is the stunning black & white cinematography to mimic films from that era and having the actors perfectly mouth the original dialogue. The result is not only a neat 19 minute murder mystery, but a visually stunning compliment to the audio.

-Finally it was fitting to conclude the collection with Jim Jacob's "About Film Festivals" (***) which is, well, about film festivals. Kind of an instructional video, Jacob's uses wry humor as he deadpans all you need to know to navigate through these type of events.

Following the Q & A with all the directors, we were treated to the best opening night grub the festival has ever provided with contributions from the wonderful Asian restaurant Ra Sushi Bar Restaurant, Belvedere Square's Neopol Savory Smokery, and Parkhurst Catering. All in all, a great way to start off the 11th annual! 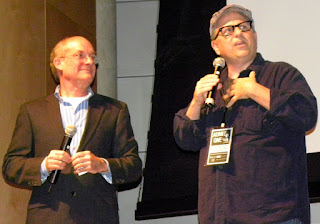