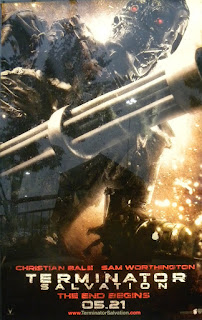 It's nearly summer so that means yet another Hollywood sequel is out to join in the cinematic blockbuster landscape. This time around, it's the 4th offering in the franchise series started so successfully by James Cameron in 1984 and followed nicely by his sequel ("Terminator Judgment Day") in 1991. Then in 2003, Jonathan Mostow ("Hancock") took over and had less success with the 3rd installment", "Terminator 3: Rise of the Machines". Now, Joseph McGinty (better know as McG-he of the "Charlie's Angels" franchise) has taken over and the results are mixed at best.

The resident cyborg this time around is Marcus Wright (Sam Worthington) who is a convicted murderer in the recent past who is asked to sign over his body by a mysterious Helena Bonham Carter just before execution. McG then picks up the story in post-apocalyptic 2018 where the machines have taken hold of the planet. A grown up John Conner (Christian Bale) is now leading the resistance again Skynet after prior terminators failed to return to the past and kill him off as a child.

Wright meets up with Conner's teenage father (Anton Yelchin), whom John must locate to send back in time to impregnate John's mother, Sarah. Got that?! Now here's the kicker: cyborg Wright has more emotions & charisma than Bale's John Conner! So much for man vs. machine!!

Actually, plot is not the strong point in this noisy mess. There is a slight hint of humor that falls flat (it involves the franchise phrase "I'll be back" first uttered by Arnold-you-know-who. Who, by the way, makes a digital appearance midway through the proceedings). However, even though there is more action packed into its nearly 2 hours of running time than any film in recent memory (the impressive special effects will remind you of a video game gone amok), in the end, I forgot most of what I'd seen by the time I reached my car.