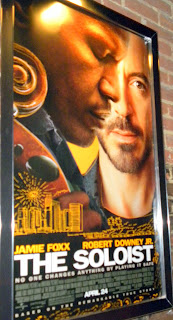 Director Joe Wright's directorial debut was his 2005 adaptation of Jane Austin's novel "Pride & Prejudice". He followed that successful debut with one of my favorite films of 2007, an adaptation of Ian McEwan's "Atonement". Wright gets the adaptation bug again this time adapting the real life story of the unusual relationship between a musically gifted homeless guy and an L.A. Times journalist.

Last month, CBS' news magazine show "60 Minutes" covered the story/film about the ex-Julliard student and prodigy, Nathanial Ayers, Jr. and how he ended up on the streets of L.A. only to be "discovered" by L.A. columnist Steve Lopez while Lopez was desperately pounding the payments in search of a story. When he came upon Mr. Ayers, who was melodically playing a cello under a statue of Beethoven, the result was not only a story but a happenstance that changed both of their lives.

As it turns out, Nathanial, if he wasn't suffering from paranoid schizophrenia, would probably be experiencing a thriving musical career (he is equally proficient on multiple instruments) instead of living a life of homelessness. As pointed out in the epilogue, there are 90,000 homeless individuals in L.A. What was it that kept Lopez particularly interested in Mr. Ayers' life long after the stories were published? That is the crux of the film and makes it one of the more fascinating human interest stories-especially since it is based on truth.

The 2 principals are played by 2 of Hollywood's finest standouts. Robert Downey Jr., as Lopez, is more than capable in the role. (However, I couldn't help looking at him and thinking "Oh, there's Downey playing Steve Lopez"-especially since he physically appears nothing like the real life journalist whose appearance was still fresh in my mind from the news magazine piece). However, the real standout is clearly Jamie Foxx. Playing mentally ill characters is never easy. It's hard to be subtle and so easy to act over the top, but Foxx successfully loses himself in the persona and, as a result, gives a memorable performance that just might be recognized by The Academy come Oscar time.

Catherine Keener does her usual competent job-supporting as Lopez's ex-wife who just happens to be his editor (in real life, Lopez is happily married-and she is not his editor. Ahh-dramatic liberties!). The screenplay by Susannah Grant ("Erin Brokovich") is serviceable if not spectacular. And the majority of the soundtrack by Ludwig Von will please most of the classical music lovers in the audience.

Although, this outing is not quite up to the level of Wright's previous 2 efforts (the film tends to drag in parts), it is worth seeing nonetheless-mainly for Foxx's performance (which raised my rating from 2 1/2 stars to 3 stars) as well as the feel good message we are all desperately seeking during these trying times.

To get everyone in the appropriate mood prior to the screening, was a brief wonderful performance by Baltimore Symphony Orchestra cellist, So Bo Li made (see below) made possible by the screening hosts, The Baltimore Sun Readers Rewards who also collected donated food for The Maryland Food Bank. 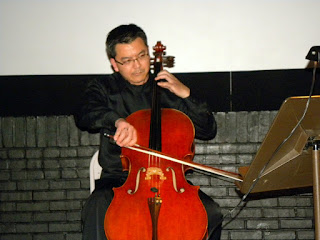 BSO soloist, So Bo Li, performs before the screening at The Charles