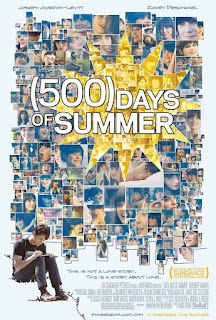 Finally! After sloughing through a bunch of mediocre films lately, here is one that is not only great but clearly one of the finest I've screened this year. First time director Marc Webb has created a brilliant take on young love that will not only sweep you up in its originality & humor but will cause you to reflect on your past love(s) with remembrance and poignancy.

No, this isn't a tale of a "summer" romance. The title is the name of a 20-something woman who has dumped the hero and narrator of our tale, Tom. Don't fret. This isn't a spoiler. You find this out in the first minute of the film.

Summer is played and given a spot-on performance by indie film vet Zooey Deschanel. Tom is embodied by the wonderful Joseph Gordon-Levitt ("The Lookout"), who started off working in TVs "3rd Rock from the Sun" and has moved smoothly into the cinema and is currently building a terrific portfolio appearing in an astounding 35 films (!) in 10 years. Together they have produced movie magic and their chemistry ignites the screen.

Most of us guys have been through this at least once in our lives: You are absolutely totally in love with a girl who has it all: looks, brains, & personality. Except there is one itsy bitsy problem: she loves you-but not as much. And that drives you absolutely berserk! You see, Summer loves Tom-but only to a point. A point that Tom has uncontrollably rocketed pass early in the relationship.

The non-linear structure announces each scene by the number of days that have lapsed since Tom, an aspiring architect, first laid eyes on his new greeting card co-worker. For 95 minutes, you see and feel Tom's emotions roller-coaster about, back and forth, up & down, from total despair to total glee and back again.

Webb has effectively used many different techniques to pull you in, from clever music video-like montages, to black & white, to references to Fellini films. Although some of his bits fall short of their mark, most hit hard & true. And the repeated references to "The Graduate" are so perfectly placed that I still can't stop thinking about that film and what it meant to me when I identified so much with it back in 1967 when I was so wonderfully in love!

The screenplay by Scott Neustadter ("The Pink Panther 2") & Michael Weber never seems forced, and the soundtrack by long-time composer Mychael Danna & Ron Simonsen unobtrusively compliments the story. And, after you see the flick, I guarantee that you'll immediately smile the moment you hear Hall & Oates' "You make my dreams come true". 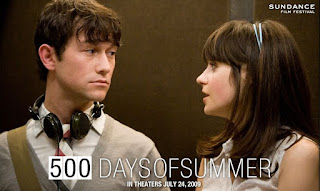