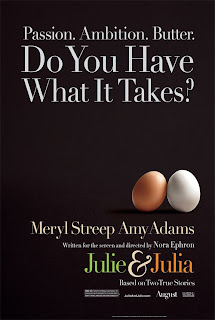 (Blogger Note: There's a first for everything. I feel it is my humble critic's duty to give a separate "Chick Flick" rating since I have to recommend this more to my female readers.)

Nora Ephron has had a hit or miss career as screenwriter and director. Her hits have been home runs (writing "When Harry Met Sally", writing & directing "Sleepless in Seattle") while her misses have been swinging strikeouts (director of "Mixed Nuts", and writer & director of "Bewitched"). Here, she has another mixed bag writing and directing this tale of 2 cooks using Julie Powell's book, "Julie & Julia: 365 Days, 524 Recipes, 1 Tiny Apartment Kitchen", as the basis of the film.

Julie, a bored office worker, and a frustrated writer, needs a challenge. So she takes up cooking by trying to replicate Julia Child's 524 French recipes over the course of one year while charting her progress in a BLOG. To further extend this simplistic plot, Nora in essence, creates 2 films in one by flipping back and forth between Julie's quest while chronicling how Julia Child became the person known worldwide as "The French Chef".

To portray these 2 characters Nora has, somewhat, reunited Amy Adams & Meryl Streep who were playing opposite each other in last year's "Doubt". Somewhat, because, unlike last year's film, here they have no scenes together. Julia refused to meet Julie as she was somehow offended by Julie's personal challenge. Then, Ms. Child died in 2004, a year before Julia's book was published.

Amy, who is building quite an impressive resume, is certainly capable as the affable Julie, but it is Streep's remarkable impersonation that makes it all worthwhile. And what an impersonation it is with Ephron accurately creating the incredible illusion of having a diminutive 5'8'' actress portray a 6'2" behemoth of a woman. You could close your eyes and, hearing Streep's voice, picture the woman who took French cooking to global heights.

Although the husbands (Chris Messina as Mr. Julie, and Stanley Tucci as Mr. Julia) generally take a back seat to the proceedings, Julia's hubby makes the most of it. The always dependable actor Stanley Tucci, gives a nice supporting role as the U.S. diplomat whose job causes him & Julia to relocate to Paris, and who reacts to his wife's new cooking obsessions with mixed patience & wit.

Curiously, for a movie geared to the preparation of food, I didn't leave the screening with a craving desire to head straight for the nearest gourmet restaurant-unlike other food films that come to mind like "Big Night" or "Babette's Feast", where your mouth was incessantly watering like a fountain! And you knew that somehow someway, Ephron was going to include the classic SNL bit with Dan Ackroyd trying to "cut the chic-kun" but slicing everything but! But overall, the film left me flat and its appeal will undoubtedly be more appreciated by a select segment of the audience (hence the added 1/2 star).