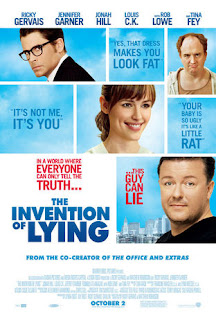 Comedian Ricky Gervais (creator of BBC's "The Office") co-wrote and directed (along with Matthew Robinson) this parable of a world where everyone tells the truth and literally speaks their mind as if there was a microphone attached. Gervais asks the question: What if some average bloke of a loser decides to change his fate by not telling the truth in this alternate universe? And that is the premise for this inventive tale that goes far beyond the telling of a little white lie.

Mark, a fat dude with a pug nose, is about to lose his job and his home. When he tries to withdraw money from his bank to cover his rent, something goes haywire in his brain (this is not fully explored but, like other aspects of the plot, you are asked to ignore a lot and just run with the concept) and, instead, tries to withdraw more than he has. Of course, the teller, whose computer is down, hands it over with no questions asked since no one tells a lie in this world. This sets in motion all kinds of possibilities for our protagonist, who proceeds, knowingly and unknowingly, to change his world and everyone else's around him.

The plot is helped along with some fabulous supporting roles from Jennifer Garner (as Mark's love interest who is clearly "above his league"), stand-up comic Louis C.K. (as Mark's main drinking bud), and Rob Lowe (as his ex co-worker who tries to win over Garner); and includes wonderful cameos by Tina Fey, Christopher Guest, Edward Norton, Philip Seymour Hoffman, Jeffrey Tambor, Jonah Hill, & Jason Bateman. The cinematography is somewhat lacking but, hey, you're not going in to this one for the scenery.

As with any one-joke premise, there are some bits and ideas that don't work as much as others, but, for the most part, the marks are hit right on that bulls-eye and should have you reflecting on religion, relationships, sex, & truths that this satire incessantly ribs with great success. 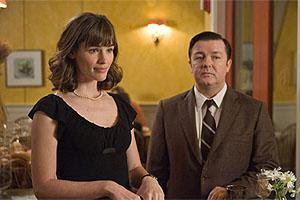