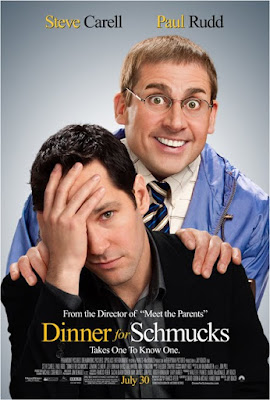 Oh boy, it's time for yet another Hollywood remake/redo of a French film. Director Jay Roach has established his career devoted to the comedy genre that includes the Austin Powers franchise, the successful 2000 "Meet the Parents", "Meet the Frockers", as well as producing the Borat & Bruno films starring Sacha Baron Cohen. Here he tackles the 1999 well received "The Dinner Game (Le Dîner de cons)" directed by Francis Veber, the source of previous U.S. remakes including The Man With One Red Shoe," "The Birdcage," and "Father's Day." Alas, another huge disappointment-especially considering the talent involved.

The premise: career minded Tim Conrad (Paul Rudd as the straight man) hopes to climb that executive career ladder to the upper floors with corner windows. After Tim impresses his boss, Lance Fender (Bruce Greenwood) during a meeting, Tim is invited to an exclusive dinner regularly thrown by Fender. The kicker: each attendee must bring a guest-the craziest/weirdest of which will be declared the "winner". Although he is reluctant to attend in a moral sense, Tim ultimately sees his chance for furthering his professional standing when he, literally, runs into Barry Speck, played by Steve Carell-outfitted with fake teeth, geeky hairdo & glasses to emphasize his character's geekiness. After Barry offers Tim one of the items that he exclusively uses in his dioramas, a stuffed dead mouse in a costume, Tim realizes that he has found his guest.

The highlight of the film, the actual dinner, does not come until the final reel, and, by then, it is too late. You have to previously endure a trying hour and a half as you watch Carell slowly intrude, and nearly destroy everything good in Rudd's life including his relationship with his girlfriend, Julie (Stephanie Szostak in a throw away role). The other characters who are introduced along the way include Barry's IRS boss, Therman (usually reliable Zach Galifianakis in a role that did not produce even a giggle), and Kieran (Jemaine Clement giving a way-over-the-top performance as a narcissistic womanizing artist who is planning to exhibit in Julie's art gallery).

I really wanted to frequently laugh out loud, but the joint screenplay by Andy Borowitz, Ken Daurio, David Guion, & Jon Vitti only managed to squeeze out several light chuckles and one noticeable guffaw (during that dinner sequence at the end). I really yearned for more bite and satire but the script seemed to have that usual Hollywood soft edge-making sure not to offend anyone in the audience.

Rudd & Carell have now done three films together (including Carell's breakout film, "The 40-Year-Old Virgin", & "Anchorman") and their overall chemistry works here, but the film desperately needs an editor's scissor. When the only thing to recommend is a 15-minute segment at the end and those wonderfully conceived dioramas of dead mice, you know you are in for a long evening. 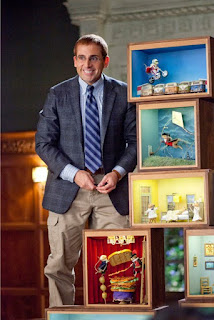 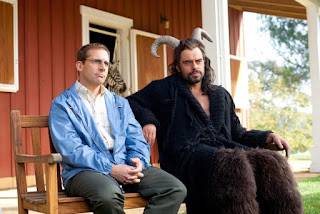 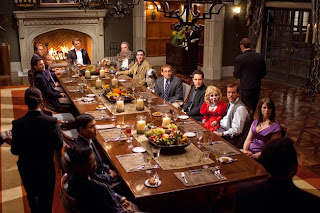 The dinner for schmucks