This ain't your father's Sherlock; or your grandfather's; or your great grandfather's for that matter. Those folks would probably absolutely despise director Guy (Mr. ex-Madonna) Ritchie's take on the Sir Arthur Conan Doyle's 19th century classic sleuth. However, today's audiences, spoon-fed with the multitude of more recent action f/x packed action heroes will more than likely go gaga over the histrionics afforded this latest of a long long line of incarnations of the London private-eye. (The Guinness World Records has the character being portrayed by 75 actors in over 211 films!).

Me? Well, I'll admit that I have not particularly paid attention to many of these portrayals. So my analysis is based strictly on this latest version and all I can say is that I was amply entertained by it all. Mostly due in large part to the wonderful acting by one of the best in the business: Robert Downey, Jr. He more than carries the action hero-type part and is aided in large part by a terrific Watson by Jude Law who perfectly plays off of the brooding Holmes.

The plot is setup with a wonderful opening sequence montage in which the evil Satanist Lord Blackwood (Mark Strong-who is becoming one of my favorite character actors. He was phenomenal in 2008's "Body of Lies") is captured and appears to be placed in a tomb after a date with the gallows. We quickly learn that somehow The Lord is not as dead and buried as it first appears. And then the fun, as well as the action, begins.

The script, co-written by Ritchie, Anthony Peckham (presently riding high as screenwriter for "Invictus"), & Simon Kinberg (2005's Mr. & Mrs. Smith) gives the plot enough meat & the main characters enough biting dialogue to keep the proceedings moving smoothly along. And, the busy Hans Zimmer supplies a score that is appropriate to the action. The only clear negative for me is the wasted presence of Holmes' love interest, the usually dependable Rachel McAdams ("State of Play") who seems to add no chemistry or warmth to the action.

Again, if you're expecting a Holmes in the style of Basil Rathbone or John Barrymore (to name but a very few), I'd advise you to stay away. But if you want diversion and care to witness a great charismatic performance by Downey, you won't be disappointed in the least. 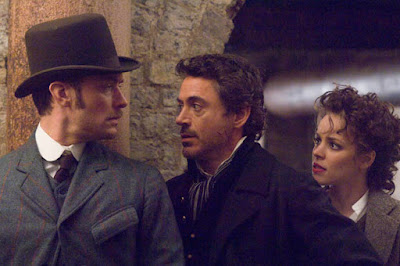 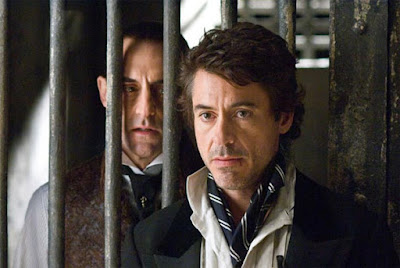