What better way to cleanse myself from the degradation of "Bad Lieutenant: Port of Call New Orleans" than this absolutely brilliant animated adaptation of Roald Dahl's ("Willy Wonka and the Chocolate Factory") 1970 children's novel. However, don't think this one is just for the kiddies as adults will find this one as entertaining as a Pixar masterpiece-and that is high praise.

Talented director Wes Anderson is adding animation to an already glowing resume. The director of such well received films as "Bottle Rocket", "Rushmore", & ''The Royal Tenenbaums", Wes tries his hand at stop-motion animation and the result is one of the most charming films of the year.

Wes & writer/director Noah Baumbach ("The Squid & The Whale) corroborated on the clever screenplay about Mr. Fox (wonderfully voiced by George Clooney) who has trouble keeping his promise to Mrs. Fox (Meryl Streep) to give up his perilous life of living like, well, a fox, after both escape with their lives after being caught trying to steal poultry. Flash forward several years and Mr. Fox, now a journalist, is bored out of his wits, mainly because his fox genes are getting the best of him. Before too long we see him sneaking off & plotting to steal from the 3 nasty owners who rule the valley: Boggis, Bunce & Bean.

There is a side story involving his odd son, Ash (Jason Schwartzman) who just doesn't seem to be getting the love he wants from his dad. The arrival of talented, athletic, can't-do-anything-wrong cousin Kristofferson (Eric Anderson) only adds to his angst. Meanwhile, Mrs. Fox is kept under total wraps as Mr. Fox begins to enlist a bevy of memorable characters including Badger (Bill Murray) & Rat (Willem Dafoe) to help carry out his schemes.

The stop-motion animation is as wonderful as the wry script. The human-like expressions on the animals are priceless. And, when you see the fur on the animals move you'd swear it was real. And as for that script, these animals are not depicted as all cutesy and warm, Disney-like characters. Mr. Fox is, after all, as cunning and deceitful as, well, a fox.

In a year of absolutely fabulous animation films, this one deserves to be included in the same conversation as Pixar's incredible "Up" which, assuredly, will be nominated for Best Picture. 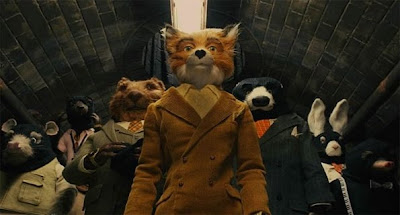 Mr. Fox and his cohorts about to take on Boggis, Bunce, & Bean