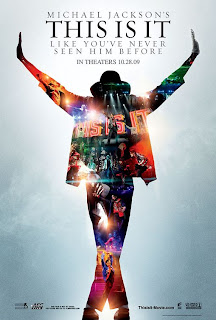 Music has always been a passion-having attended hundreds of concerts in my lifetime-from classical to blues to rock. Back in September 1984, I took in the Jacksons' controversial Victory Tour concert at Washington D.C.'s RFK stadium-which ended up being their last tour of the U.S. & Canada. Jackson's popularity was at a peak with "Thriller" still riding high on the charts (it remains the best-selling album of all time). I was swept up in the Jackson mania and thought this was a great opportunity to catch a legend at his peak.

I remember the concert as being just so-so; and as his bazaar behavior continued to multiply each passing year, it diminished my respect for his artistry and his music. So, when he died last July, I was ambivalent at best. My opinion of him was that of a brilliant artist who became nothing more than a cultural oddity and side-show.

When news of this documentary first came out, my impression was that here was a last ditch effort by the promoters to bank on his name and untimely death. So when I started hearing and reading the positive buzz on the film my interest perked. I decided to put all my negativity aside and go into it with an open mind. What did I find? Hands-down one of the best music documentaries I have ever seen, and, as a result, I now view MJ as an extraordinary artist who tragically died way before his time.

Director Kenny Ortega (director of the latest "High School Musical" incarnations and who was the choreographer for "Ferris Bueller's Day Off" & "Dirty Dancing") was also the director of the MJ tour that was never to be. What he was made here, however, is a snippet of what might have been one of the most exciting musical/theatrical events ever.

Going in, I expected a lot of talking heads with scattered behind-the-scenes rehearsal footage that showed Jackson setting up the show. I expected, maybe 50-60% percent music. I got 90%-and what a 90% it is! Shot at rehearsals held from April-June 2009, the seamlessly edited musical numbers are nearly complete compositions that focus on Jackson giving an intimate concert-like performance-sans thousands of screaming fans. Here was a consummate artist who gave his all even when it didn't "count".

Despite an absence of 9 years, his voice (never his strong point; for me, his standout was always the movements) is as competent as ever and his dancing still impeccable. I remembered how frail he looked on the tabloid TV shows over the last several years-being wheeled into courtrooms during his infamous trials. That Jackson was not present at all on screen.

We are also treated to the ideas that would never come to fruition: the elaborate staging is merely hinted at, and pieces of the production, such as using blue-screen to insert MJ into old movie clips are shown during the rehearsal sequence in such a way that I yearned to see the final product. A final number that illustrates Jackson's love of the planet using a filmic clip of the rain forests cradling a young child as trees are bulldozed around her is effectively heartbreaking. As is the final gathering of all the principals holding hands in a circle to show their camaraderie for what was supposed to be Jackson's swansong concert tour-probably shot mere weeks before his demise.

A short segment in the beginning concentrates on the worldwide search for the dancers that would mirror MJ's style and talent. Many expressed a lifelong dream to be performing with Jackson. Tryouts reduce the thousands to a handful lucky enough to be selected. I kept thinking how devastating they must now feel that their dream vanished so suddenly.

But what really wowed me is the backup band that promised to be nearly as special as the front man. Ortega used HD quality sound (seeing it in a theater with a decent sound system is a must!) to show that the talent on screen matched the best pop bands I have ever seen live. The standout is 23 year-old Australian guitarist Orianthi Panagaris who was hand-picked by Jackson after viewing her on YouTube, and has played with Prince & Carrie Underwood, as well as being named as one of the 12 Greatest Female Electric Guitarist. She's featured on a couple of numbers and you realize that this tour would be the showcase that could launch a career.

Jackson always lamented growing old and so, ironically, he has departed the planet without doing so. However, as the credits rolled, I was overwhelmed with sadness. We will never know whether or not the heinous molestation charges were true. However, viewing this, I do know that his "King Of Pop" moniker was well-deserved and will remain unchallenged-a tribute to a one-of-a-kind entertainer and celebrity. 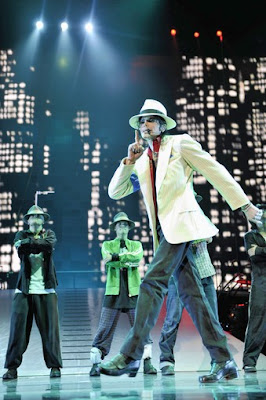 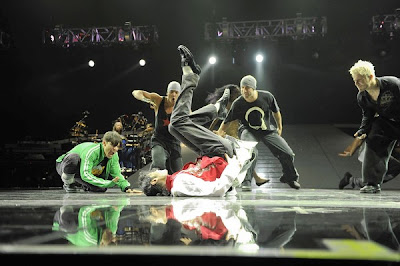 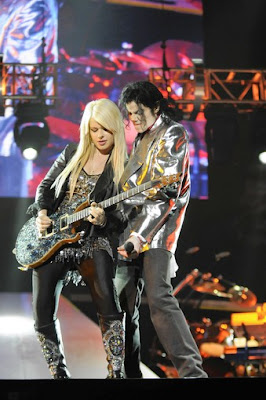