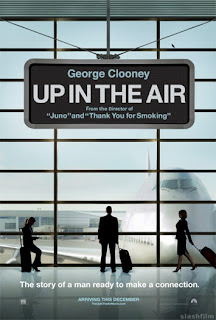 Cary Grant is alive & well, and his name is George Clooney. There are not many actors who can play such a disagreeable lout as Ryan Bingham with such aplomb and come off smelling like a rose. But Clooney is now making a career putting out that charisma in bucketfuls on the silver screen and, as a result, look for an Oscar nomination (and my early prediction to win it for the 2nd time) to come his way yet again. In fact, I count at least 6 noms (picture, directing, acting, and screenplay) for this smart, biting, intelligent look into the larger world of corporate firings and the smaller world of personal comeuppance, based on the 2001 novel by Walter Kirn.

Ryan is a guy who loves his work. His company supplies folks who do the dirty work for corporations who are employee downsizing. Instead of doing it themselves, it is much cleaner to have someone like Alex "gently" come in and fire the employees for them. Fact is, he spends 260+ days of year traveling (he's asked on one of his myriad airline flights where his home is and he deadpans "Here.") and he couldn't be happier. His only pursuit in life: to become the 7th person on the planet to accumulate 10 million airline miles which will earn him a special card, a dedicated line, and a personal conversation with the airlines #1 pilot.

When he's not doing this job, he travels the country giving self help-type motivational speeches about how to uncomplicate ones life by emptying their cluttered "backpack" of things & relationships they have accumulated. Funny. The dude definitely has practiced what he's preached-keeping his life as uncluttered and uncomplicated as possible by never having connected with anyone in his life for very long (including family).

However, all of that is about to change when, in a hotel lounge, he meets his match: Alex Goran (later on she tells him she's him with a vagina). Ryan & Alex (given a perfect spot-on performance by Vera Farmiga from "The Departed" & "The Boy in the Striped Pajamas") connect instantly. In fact, our hero might be wavering as he reluctantly relents to attend his younger sister's wedding (Melanie Lynskey, who started acting opposite a young Kate Winslet in the terrific "Heavenly Bodies"). He invites Alex to be his date-instead of having their usual tryst in a hotel room. Their relationship forms one part of the story.

The other part is his relationship with fresh faced, spunky, just-out-of-Cornell-and-ready-to- conquer-the-world Natalie Keener portrayed by Anna Kendrick ("Rocket Science" & "Twilight") that will also surely earn her a supporting Oscar nomination. She has come to Ryan's boss, Craig (ably played by Jason Bateman) with a novel idea: why not save thousands in unnecessary traveling airline fees by firing people via online video hookups instead of face-to-face.

When Craig calls everyone off "the road" to introduce the new employee and to inform them they are all about to be permanently grounded, Ryan is appalled. He sees his pat life flash before his eyes as it is about to come crashing to earth-literally & figuratively. In order to show that his way is the decent, sensitive, "morale" approach of doing business, he and Natalie takes to the road together to show her the ropes of the trade, as he desperately tries to stay "up in the air".

Director Jason Reitman is making quite a name for himself. The son of Ivan Reitman ("Ghostbusters") has made 3 standout films. He wrote & directed his first film, 2006's indie hit "Thank You for Smoking" and co-wrote this script (along with Sheldon Turner who penned the remake of "The Longest Yard"). His sophomore effort, "Juno", although not one of my personal favorites, was a huge Oscar-nominated hit last year. (I prefer his writings much more than Cody Diablo's-so I won't hold it against him.) He actually had this film in mind before the others and produced a script that is relevant to these trying economic times while intelligently reflecting on the modern human condition that tends to be devoid of human commitment & empathy. The screenplay is, hands-down, one of the smartest for any film I've seen this year.

Rolfe Kent has provided the perfect low-key unobtrusive music as he had for 2004's phenomenal "Sideways", "Thank You For Smoking", & a myriad of other films during a cinematic musical career that began in 1998.

All in all a terrific start to the December onslaught of films vying for Mr. Oscar.

The Paramount film starts platforming around the country on December 4th. 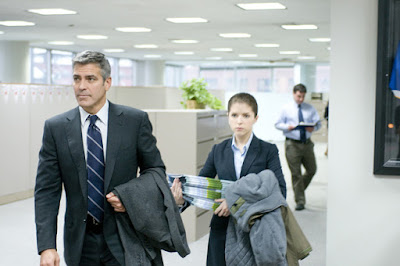 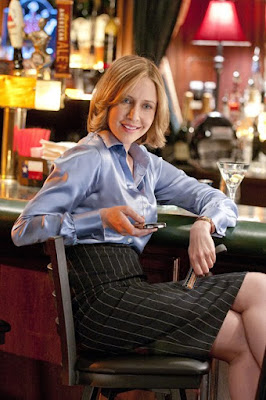