By now, most sports fans in general, and NFL fans in particular, are familiar with the incredible real life story of Michael Oher. Most everyone else who have turned on a TV recently, have been bombarded with the trailer of this film starring Sandra Bullock as the no-nonsense mom who adopted the homeless 300+ lb behemoth African-American teenager and who guided him to become, not only a college graduate, but also the Baltimore NFL Football Raven's first round 2009 draft pick.

Phenomenal feel-good story. Not so phenomenal movie. In fact, as an extremely passionate sports fan, I was thoroughly disappointed in this manipulative Hollywood schlock. The film is based on the 2006 novel "The Blind Side: Evolution of a Game" by Michael Lewis and it is entertaining on some levels (in fact, the Baltimore preview audience collectively seemed to love the film); but as a gritty true-to-life expose, it fails miserably. And to be honest, I'm not surprised. What should have been titled "The Leigh Anne Tuohy Story", this is numero uno on why, generally, I favor independent and foreign films.

Sandra Bullock dons tight clothes (you'll see her in about 20 different form fitting outfits) and sports a blond mane to portray the no-nonsense wealthy Republican fireplug-giving a one note performance that is nauseatingly clichéd from start to finish. (Someone suggested she should be nominated for an Academy Award. If so, I'll eat this review!) And I just loved the scene when Sandra confronts Michael's homeys in the Memphis projects with a sass that would have probably gotten her killed in a real setting.

The subject of the film, played by first timer Quinton Aaron, is so low keyed throughout, you wonder how in the heck he ever attained anything in life. I desperately wanted some insight into his psyche or how he ever managed to survive the streets of Memphis before being "rescued" by The Tuohy's-which would have really been a much more interesting storyline for me. Instead, we get the usual Hollywood gloss-over with only a passing mention of his drugged-out mom & absent father.

Playing opposite his better half is country singer Tim McGraw, whose role is merely to be a doormat for his spouse. And to bring even more levity to the proceedings is the Tuohy's precocious preteen (played annoyingly to the nth degree by Jae Head) whose main job is to be the spokesperson for his mostly mute "brother".

Writer/director John Lee Hancock has made a career tacking sport themes, directing the 2002's critically acclaimed "The Rookie" and screenwriting 2008's well-received "The Express". But somehow the decision was made to completely dummy down what could have been a real socially conscious blockbuster. Like I said-there is entertainment value here but the true-to-life feel-good story on the screen is too sugarcoated for my tastes. 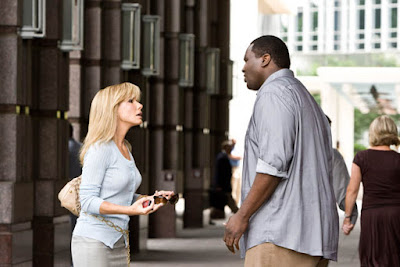 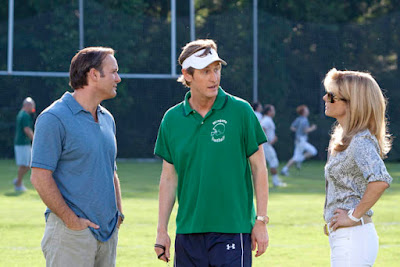