With that in mind, I was highly anticipating his latest. So off I went to screen it at Baltimore’s film club, Cinema Sundays at The Charles. Adding to my excitement was the appearance of local filmmaker Matthew Porterfield as guest speaker (see photo below). (His 2006's excellent debut film "Hamilton" had a limited exposure run in 2006 and is definitely worth checking out if and when it gets to DVD.)

Was it worth the trip? Well . . . let me just say the movie was a highly disappointing experience. Bahrani and co-writer Bahareh Azimi, deal with the topic of suicide and, believe me, you might feel like committing it yourself after spending a verrrry long 91 minutes gazing at the screen.

The film opens in the Winston-Salem taxi cab driven by Senegalese immigrant Solo (impressively played by newcomer Souleymane Sy Savane). His current fare is old, grizzly Southerner, William (Red West: actor, stuntman, and Elvis Presley’s ex-driver & bodyguard) who offers Solo $1,000 if, in 10 days, he will give him a one-way drive to Blowing Rock National Park. When Solo jokingly asks whether he plans to jump when he gets there, all he gets is a vague stare back from his passenger. It is never mentioned again.

From this opening scene, the film proceeds to show how Solo goes the extra mile, time after time, to try and connect with William after the initial drop off at a local cinema. All the while William unsuccessfully tries to disconnect from Solo's defiant determination to intrude into his life. Interspersed are scenes involving Solo's relationship with his Mexican wife (Carmen Leyva) and his pre-teen stepdaughter, Alex (convincingly played by Diana Franco Galindo), as well as numerous takes inside that taxi.

However, it is his relationship with the mysterious William that is at the heart and soul of the narrative. He and the audience are constantly guessing as to the motives & history behind William's actions. Ultimately, the continuous use of close-ups and periods of silence became unnerving to me. And Bahrani's technique near the end that helps to answer some of these questions had me rolling my eyes in disbelief.

During the more interesting Q & A, the topic of suicide, and whether or not it was realistically depicted on the screen, was a prime topic of discussion- including a perspective by a psychiatrist in the audience. (One of the great aspects of the club is the, at times, fascinating Q & A that follows even a dismal film). Also, when someone questioned Solo's persistent interest in William, who is clearly 30-40 years younger, the point was made that Africans revere the elderly as treasures and could help to explain his actions.

Whatever the reason, I didn't get as involved or moved as much as the filmmaker had intended; and I certainly wouldn't label Bahrani's latest feature, "an almost perfect film", as written by a notable critic whose review appears on a giant billboard in the lobby. 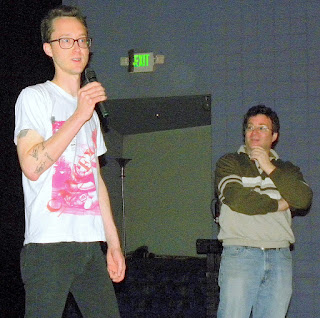