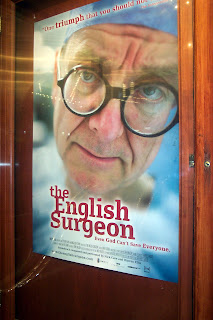 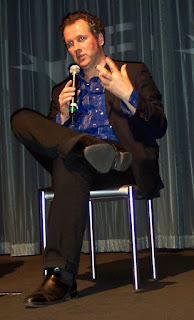 Off to The AFI Silver for another between festival event put on by the wonderful folks behind the SILVERDOCS Documentary Film Festival. This time around it's the screening of last year's SILVERDOCS Sterling World Feature Award winner, Geoffrey Smith's riveting documentary, "The English Surgeon".

Superbly edited, this multi-award winning documentary has director Smith chronicling the exploits of British neurosurgeon, Dr. Henry Marsh who, after falling in love with The Ukraine and its people after a lecture visit in 1992, proceeded to do his part to help reverse conditions that are, as he put it, "like being in a horror movie". Teaming with resident neurosurgeon Igor Kurilets, he has made annual visits to the country and we see him deal with several cases-most notably a brain tumor overtaking the life of one, Marian Dolishny.

Another portion of the doc deals with Marsh's pain on not having the ability to save a young girl early in his Ukrainian career-which has continuously haunted him ever since. We go along with him as he visits the child's family many years later and see that, even though there wasn't a successful outcome for his patient, his humanitarian effort was still extremely appreciated by those who were left behind to grieve.

Still a third segment deals with the heartbreaking case of a beautiful young woman who appears normal on the outside but on the inside has an inoperable condition that will take her life in a matter of months. We see Dr. Marsh, using his experience, advise Igor on how best to handle his discussions with the unknowing patient-how to offer even a glimmer of hope in such a hopeless situation.

The unobtrusive fabulous soundtrack was provided by Nick Cave & Warren Ellis. A portion of the film might remind you of those surgical documentaries readily seen on Public Broadcasting (you can always look away if these scenes are too unsettling), but, by all means, don't let that alone keep you from seeing this remarkable human film about someone who will inspire and make you glad you are a part of the human race.

At the Q & A, after someone congratulated him on the soundtrack by Nick Cave, Smith revealed that he was friends with Nick and got him involved in the project (coincidentally, Nick was the writer & composer of one of my favorite films, 2006's "The Proposition"-which happened to be playing at the same time in one of the AFI Silver's companion theaters). When Geoffrey stated that Dr. Marsh was in his 50's, the audience was aghast as he appears much older and more than likely has aged beyond his years due to the nature of his work. Smith also informed us that the film is opening in several major cities this month and will appear on PBS' P.O.V. series in the fall. If it doesn't open in your city, be certain to check you local TV listings later in the year for this intriguing human interest profile.