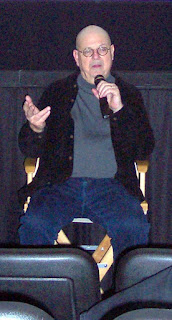 I first fell in love with the cinema while growing up in the 50's watching a ton of those Grade B (and most of the time, C & D) sci-fi flicks that later became standard fare on TV in the 60's and beyond. Bad acting, bad special effects, bad production values, bad . . . well-it really didn't matter how good or bad they were back then because when you are soooo young & impressionable and are sitting there in the dark, all it did was fuel my dreams and nightmares for years to come. I vividly remember my very first film, 1953's "Invaders From Mars", when, at age 5, I walked to The Pikes Theater to see it with my older brother. (I can still see that slopping walk path lined with the picket fence as if it was yesterday-which opened up and devoured anyone who was on it.) Then, as a teenager, came those Saturday matinees at The Forest Theater, where, for 25 cents, you could watch that weekend's horror/sci fi double feature (remember those?!)-along with the running serials such as the "Rocket Man" or "Flash Gordon" series. Double features have gone the way of baseball's double headers.

Well, it has taken most of my life, but, finally, along comes "Alien Trespass" to fuel these long ago memories. And, I can honestly say that director R.W. Goodwin gets it! He gets the look, feel, and sounds of these "classic" movies by lovingly creating an homage to this bygone era with "Alien Trespass". Not just a send-up but a send-off for anyone who has nostalgic memories of this period of film making.

R.W.'s first foray into film (after receiving 3 Golden Globes and 5 Emmy nominations for producing/directing episodes of TV's "X-Files) is a total hoot! It's 1957 in The Mohave Desert when several of the local towns folks see a "meteor" streak across the skies. Local astronomer Ted Lewis (Eric McCormack), who is cooking dinner for his seductive wife Lana (Jody Thompson), sees it as they are about to celebrate their anniversary. Local waitress Tammy (Jenni Baird), who dreams of some day opening an art store in Salsalito, sees it. And Dick and Penny (Andrew Dunbar & Sarah Smythe) see the "meteor" crash nearby while making out at the local lover's lane.

Except, of course, it isn't a meteor, but a spaceship housing the silver space-suited Urp and his cargo: the monstrous one-eyed (rubber) creature, Ghota, who escapes. You see, Ghota has quite the appetite (he reduces all its victims to a messy brown blob in seconds) and, unless it is caught in time, will destroy our civilization by eating and multiplying it's way across the planet. The only real recognizable face in the cast is Robert Patrick of "Terminator 2" fame. He plays Officer Vernon- a dude who lusts after just about anything that moves.

Adding to the fun is a wonderful satiric script by Stephen Fisher (from a story by he and producer James Swift), plus a spot-on score by composer Louis Febre-replete with the requisite theremin which seemed to populate almost every sci-fi film score in the 50's. Oh, and did I mention the "special effects"? "Plan B From Outer Space" has nothing on this film, folks.

I had the pleasure of attending the screening with the Director (see above) who imparted these interesting tidbits: It was shot in 15 days; R.W. had in mind the 1953 Barbara Rush classic "It Came From Outer Space" while creating the film; when someone suggested they used CGI, D.W. shot back "no way"-the creatures had to be hand made: just like they were back in the 50's.

I'm not sure how this will do in the theaters. After all, I would think the target baby boomer audience will get it, but today's youth, schooled on today's elaborate CGI effects, might not. However, for me, it's been awhile since I went though an entire film with a continuous smile on my face!