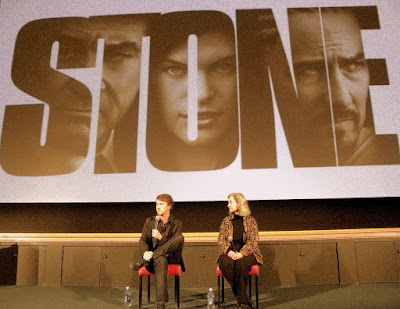 Off to the AFI Silver for another special event. This time it's the screening of Robert De Niro and Ed Norton's latest corroboration (they previously worked together on 2001's "The Score", which was also Brando's last film) followed by a Q&A with Norton-who grew up down the road in Columbia Maryland. Despite the A-list actors and a promising opening 10 minutes, ultimately, the post-screening festivities (coverage provided after this review) were far more satisfying than the film.

The psychological prison drama is one we've seen before. As the film opens, we witness a young Jack Mabry (Enver Gjokaj) threatening his wife (Francis Conroy) when she announces her intent to leave him. Switch to the present, and Mabry (De Niro) is a dutiful parole officer getting ready for retirement. But, before he does, he's about to be responsible for handling Gerald "Stone" Creeson (Norton-in dreadlocks, no less)-a hardened urban criminal doing time for murdering his grandparents and then torching their house.

When Creeson, a career manipulator, realizes that his chances of getting paroled are slim & none, he hatches a plan to have his wife Lucetta (played alluringly by Milla Jovovich) seduce Jack in hopes of blackmailing Creeson to ultimately obtain a favorable parole recommendation.

Director John Curran (2006's "The Painted Veil) does a fairly competent job. However, what is most disappointing is the pedestrian script by promising screenwriter Angus MacLachlan in this his 2nd effort after bursting onto the scene with 2005's highly successful "Junebug.

Although the acting is first rate by the principles, the film's psychological twists and turns all seemed too familiar and predictable that, by the end, I could have cared less about the outcome.

The DVD was released on January 18.

As I stated, the wonderful discussion and Q&A were well worth the price of admission. Moderated by film reviewer and corporate expert, "Movie Mom", Nell Minow, the audience was thoroughly entertained and enlightened by Mr. Norton, who provided much insight into his acting style, in particular, & the movie making business, in general.

When quizzed about the cornrows he sports early in the film, Ed said that while researching at the prison he noticed that they were ubiquitous-as prevalent as tattoos. He also mentioned that the prisoners carry with them a kind of "intense anxiety" that he tried to bring to his portrayal and that a lot of it that ended up in the scenes was not in the script. He spoke about one particular prisoner who actually supplied him with about 60% of the language that Norton ended up using in the film.

He called De Niro the "librarian of actors", saying that he was the most right-brained, clinical, methodical, & meticulous actor he knew. Edward added that he identified with De Niro's research oriented approach to his craft. Also, knowing each other before meant they didn't have to over rehearse their scenes together.

In response to a question about his work on the stage, Edward mentioned that his whole grounding and training was in theater and that he's always looking for a good play. Also, Edward admired and appreciated Curran who brings a lot of ambiguity to his films instead of spoon-feeding the audience and making sure they like him.

When quizzed as to what he found was most difficult in going from acting to directing (he directed the 2000 comedy "Keeping the Faith") he humorously commented that it was "annoying actors that won't come out of their trailers to the set". Then, more seriously, added that it was having to deal with so many responsibilities. He quoted Hitchcock saying that it was like getting pecked to death by a thousand pigeons. He was more comfortable directing a lighter film for the first time as opposed to a more layered film such as "Stone"- adding that he greatly admired people like Orson Wells who do monumental characters while directing. 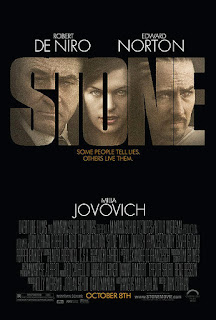 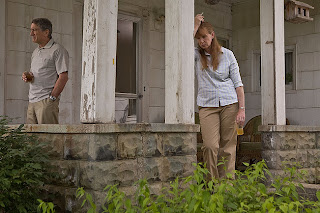 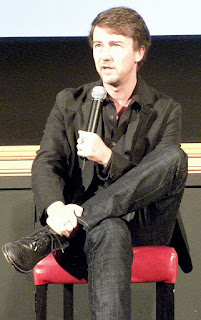 Ed Norton responding to a question
from the audience