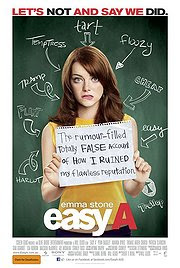 A star is born-and her name is Emma Stone. Well, not exactly born-the 22 year-old actor has already appeared in a number of supporting roles-beginning in 2008 in "The Rocker" & "The House Bunny", as well as 2009's critically-acclaimed "Zombieland", and in 2009's not-so-critically-acclaimed "The Ghosts of Girlfriend's Past". However, her breakout role as virgin schoolgirl Olive Penderghast will not only put her on the map but could easily garner an Oscar nod as well.

Olive wants to get out of a camping weekend with her hippie parents and ends up spending it alone at home. When quizzed by her best friend Rhiannon (Alyson Michalka) as to how she spent her weekend, she makes up a white lie that she had a rendezvous with a college dude. The fib spirals quickly out of control through the usual gossip channels. Suddenly popular "in the wrong way" she uses her newfound popularity to help positively transform the negative perceptions of gays, nerds, and misfits-all the while fueling her perception as the school sexpert.

The film will bring to mind other top notch teen comedies such as "Clueless", "Mean Girls", & several John Hughes' classics, but this one stands on its own-mainly due to the charismatic Stone who confidently carries the picture on her lovely shoulders. Oh, and the "A" in the title is more than likely a clear reference to Nathanial Hawthorne's "Scarlet Letter", where the heroine was forced to wear that letter around her neck to symbolize her adulterous ways. For me, it also stands for the rating that I am giving for both the film, in general, and Emma Stone, in particular.

The movie is currently available on DVD. 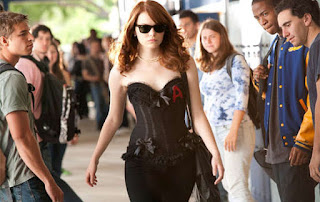 Olive (Emma Stone) getting the attention
of her school mates