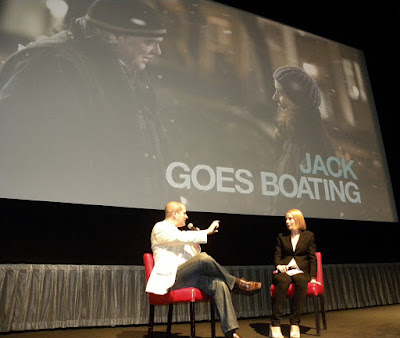 Add Philip Seymour Hoffman to the ever-growing list of actors who are trying their hand behind the camera. Thankfully, he continues to put his mug in front of it as he marvelously performs double duty in this wonderful character-driven drama based on the off-Broadway by Bob Glaudini (who does the scriptwriting honors as well).

Jack (Hoffman), a limousine driver for his uncle in New York, is a painfully shy loner. He regularly meets with his much more outgoing co-worker & best friend Clyde (John Ortiz, last seen in 2009's "Public Enemies" & "The Fast & The Furious") and, at the suggestion of his wife, Lucy (Daphne Rubin-Vega) agrees to be fixed up with an equally shy person who works with Lucy in a funeral home.

The three principals have recreated their stage roles for the screen. The newcomer to the project is the wonderful Amy Ryan (nominated for Best Supporting Actress in 2007's "Gone Baby Gone") as Connie. Although the match appears to have been made in heaven, two lost souls who have finally found each other, loner Jack begins the laborious process of trying to woo Connie with proper mentoring in cooking and swimming skills provided by Clyde. All of this prepares the audience for the climatic third act when Jack attempts to prepare a first-time dinner for Connie, Clyde, & Lucy.

One can see how this story would fit nicely on a live stage, but Hoffman, who does an admirable, if somewhat pedestrian, job behind the camera, opens up the story with drab location shots around the big city. Nevertheless, what really drives this simple, human story about 2 very diverse couples is the superb acting. Each actor brings a definite believability and poignancy to their characters that makes the 90 minutes fly by, and, ultimately, worthwhile.

The film is available on Netflix on January 18.

Following the screening at the AFI-Silver Theater was a wonderful interview with actor Amy Ryan by moderator Blake Robison (Producing Artistic Director of the Round House Theater in Silver Spring, MD) followed by a fascinating Q & A. During the interview, Amy spoke about her last appearance in D.C. at the Kennedy Center in 2004 performing in "A Streetcar Named Desire" (which led to a Tony nomination). She also performed on the stage in "Uncle Vanya".

Amy was born and raised in Queens and still resides in N.Y. in Manhattan. She mentioned that she worked with Hoffman in "Capote", but, before that, she worked with him in N.Y. in one-act plays for the drama department. When Philip asked her to be a part this film, he asked her if she could wait about a year because it was to be filmed in winter. She humorously remarked that "yes, Philip is someone I'd wait forever for". The play was performed in N.Y. by the LABrinth Theater Company, a company run by both Hoffman and founder John Ortiz.

Ryan stated that the rehearsal lasted an extraordinarily short two weeks before filming began. She mentioned that Philip wanted to get that done because it would be difficult to explore the acting as much when he began directing.

When asked the question as to what was her favorite part about stage acting and film acting. Amy responded that, in stage acting, she has an intimate dialogue with the audience and experiences a thrill due to the energy that happens in the dark-that everyone is in on the story. She mentioned the thrill, "like no other", of the immediacy of this process. As for film acting, there is the excitement of sharing it with a larger audience despite the process being so minuscule-that it's a different intimacy. Amy always believed it was important to do plays when she was younger because she realized that theater is where she would learn to be a better actor and film was where she could apply what she learned.

In addition to stage and film, Amy has also added TV to her resume, appearing in the finale of season four of "The Office" and several subsequent shows, as well as in HBO's "In Treatment" series as Gabriel Byrne's new therapist. 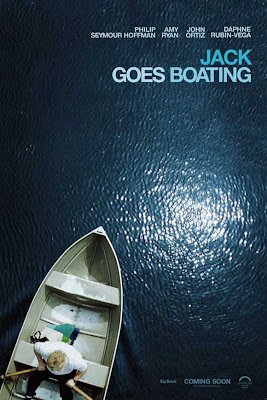 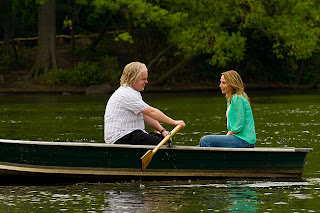 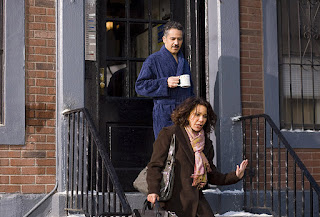 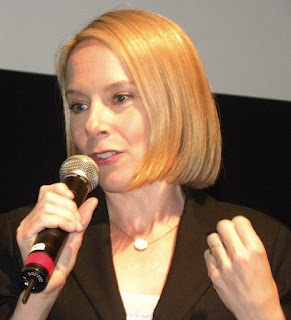