When I saw a chance to see the phenomenal character-driven PIXAR film with director/co-writer Pete Docter doing the Q&A, I couldn't pass it up. Docter's credentials are impressive, to say the least: he's credited with the story for the original "Toy Story" & 2008's "Wall-E" as well as directing last year's "Monsters, Inc". So down I-95 to D.C. I traveled to attend a special one-time only presentation of The Academy's 2009 Animation winner (and one of the richly deserved 10 Best Picture nominees), showing as part of this year's D.C. Environmental Film Festival at the National Geographic Museum.

Following a brief intro it was time to settle in to view the latest PIXAR masterwork that just happened to open last year's Cannes Film Festival-the first ever animated film to be so honored.

By now, most film goers have seen the beautifully rendered animation that explains how it is never too late to pursue a dream. The trailers never hint at the wonderful arc the story line takes (I had repeated bouts of laughter & tears alternating throughout-not usually expected when viewing an animated film). And based on those trailers, you would think that this was merely a story about an old geezer who floats away in his house with an unexpected visitor at his door after the house is airborne. There is so much more to the narrative that Docter, and his co-writer Bob Peterson, have created that, if you haven't seen it I won't spoil it for you here-best to be surprised.

We are first introduced to Carl (the crotchety old man in the house) as a pre-teen in a movie theater in the 30's watching one of those newsreels shorts (and you older readers will know exactly what I'm referring to) that shows the latest international human interest story to the audience. This one concentrates on the exploits of the world famous explorer Charles Muntz (voiced by Christopher Plummer) who has unearthed a newly discovered creature in South America. Carl idolizes Muntz and yearns to be an adventurer in his footsteps when he grows up.

We then see him meet the effervescent Ellie and together they form a pack to explore the world together. Early on we witness their love affair from youngsters to adults and there is a stretch which summarizes their life together that is one of the most magical excerpts I have ever witnessed-be it live or animated (more on this later). Although Ellie is actually on screen for a fraction of its length (she's not even hinted at in the trailers) she is a main focus of the story. Her presence is always felt and helps to drive the remarkable tale forward.

After Ellie passes, their dream of exploration a forgotten memory (after all, saving for their life-long adventure isn't easy with bills and unexpected events keeping the dream from being realized), Carl (wonderfully voiced by Ed Asner, whose visage resembles Carl) becomes grumpy & forlorn with only pictures of Ellie gracing the walls of their long-time love nest to forever remind him of her presence. When faced with eviction because his house is in the way of the latest urban development, he solves the dilemma with those thousands of balloons and, voila, the dream comes alive.

Where he lands and what he founds there is what this tale is all about and by the end, you learn, along with our hero, that life and dreams can indeed intertwine, we should always be open to new lessons, and that one is never too old to change. A film for young and old that will bring happiness and sadness and make you think more than once about what it means to be alive. You'll realize that life is a journey full of surprises that you don't necessarily need a house lifted by balloons to experience. This is a true work of art on so many levels.

What followed the screening was one of the most remarkably entertaining Q&A's I've ever witnessed. The 40 minutes began with Pete, who has been working at PIXAR for over 20 years, displaying a wonderful slide show to show how the project came together. He said the characters came to look like actual people (it was no accident that the young Explorer Scout who shows up on the front porch to join in the adventure appears Asian as his inspiration came from someone in Pete's office). And the South American falls predominate in the film was an actual location: the huge Angel Falls in Mt. Roraima in Venezuela-discovered in 1884 and was the inspiration in Arthur Conan Doyles "The Lost World". Since the film focused on the magnificent falls, it provided the ideas for the design of the film. To that end, the production team ventured to the actual site to scope it out and to make the drawings on the hillside like painters doing landscapes. These drawings translated beautifully to the magnificent color palette seen on the screen.

Revealed during the discussion was that it took 5 years from the time that Pete started scribbling his idea for the story on restaurant napkins to the final product. (This is not atypical for PIXAR, who allow their artists the necessary time for them to work their brilliance. Pete mentioned that "Cars" took 6 years!) And that wonderful silent (except for music) sweet & sentimental sequence that shows Carl & Ellie's life together took a year & a half to complete to, as Pete said, "To get it right". And get it right they've done! The string of scenes, written by Bob Peterson, depicting Carl & Ellie's life together, originally was 20 minutes long covering 20 story reels which included snippets of dialogue. They needed to shorten it so they cut out the dialogue until each scene was carefully orchestrated by either setting something up or paying something off. When complimented on the sequence, he revealed that it was the portion of the film he was most proud of. An absolutely brilliant interlude that I've never witnessed before in an animated film.

Pete also mentioned that his inspiration as an artist and a person was the late Disney legend Joe Grant-who designed the Wicked Queen in Disney's 1937's "Snow White and the Seven Dwarfs", and, at 95 was still drawing (he came up with the name "Monsters, Inc."). He died at age 96 in 2005.

Someone mentioned the brilliant score by Michael Giacchino, who also composed the scores for "Ratatouille" & "The Incredibles". His talent in establishing themes and his ability to fit the music of the times to the visuals is nothing short of amazing.

Other inside looks at the creative process: unlike other animated films, he made a conscious effort not to include a reference to anything (well-except for the dogs playing poker drawing); the later segment involving Muntz was rewritten and reboarded over 50 times; the story is first scripted followed by 6 or 7 artists drawing it out to thousands of storyboards. These storyboards are then put to film with music, dialogue, & sound effects-allowing them to actually edit before it is shot in order to find the right story and characters; what is actually on the screen are not actual drawings but are computer photographs of conventional objects that utilizes a sort of stop-action animation (like Tim Burton's "The Nightmare Before Christmas"); Peter is the voice of Kevin, the rare bird in the film.

He finally informed us that PIXAR will release Toy Story 3 this summer & a sequel to "Cars" sometime next year.

If you haven't seen this extraordinary work, be certain to put it at the top of your list of must-sees! 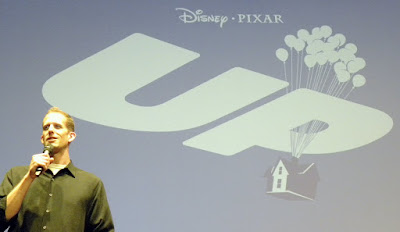 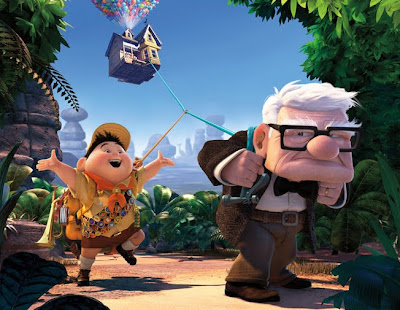 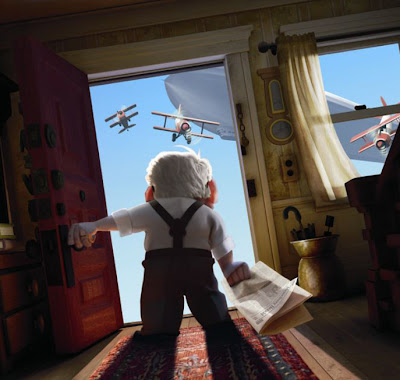 Carl and his house under attack 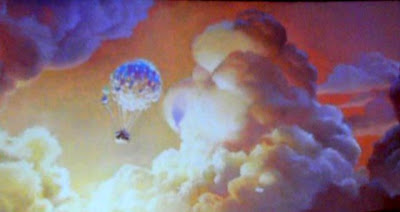