Time for another Sunday morning offering at Cinema Sundays for this film, based on the international bestselling novel by the late Stieg Larsson, that has been generating some terrific buzz, as well as terrific reviews surrounding its platform release date of March 19th.

Larsson, who died of a massive heart attack in 2004 at age 50, was a Swedish journalist and writer who had completed 3 manuscripts and part of another before his untimely death. They were part of the Millennium Trilogy of crime novels (he actually completed the synopsis for a 4th & 5th, with a planned total of 10). He never had them published before his death-writing basically for his own pleasure. When the first 3 were posthumously published, they became instant hits. The first was "Men who hate Women"-renamed "The Girl with the Dragon Tattoo" when it was published in English. Each novel has Lisbeth Salander & Mikael Blomkvist as its primary characters.

When the film opens, we see an elderly man meticulously opening a package. When he sees that it is a pressed flower in a frame, he begins to weep. The scene shifts to the case of investigative journalist Blomkvist (played with perfect conviction & believability by Michael Nyqvist) who has just been found guilty of libel and is preparing to serve a jail sentence 6 months hence. Fully prepared to accept his fate without appeal, he is asked to meet with wealthy tycoon, Henrik Vanger (Sven-Bertil Taube, "The Eagle Has Landed").

It seems Henrik, who lives in a gloomy mansion on a remote island, has been forlorn ever since 1966 when his favorite niece, Harriet, disappeared at the age of 16 on the day the only bridge off the island was temporarily closed. The suspects? Only all 30 of the Vanger clan-some of which are Nazi sympathizers! It seems that Mikael used to be babysat by Harriet. Henrik feels that Mikael was, therefore, the perfect person to uncover the mystery once and for all-at least before he scoots off to jail.

After he sets up shop in the mansion, his computer investigative activity related to trying to solve the decades old cold case is intercepted by the intense Lisbeth, a sexy Goth hacker (Noomi Rapace in a truly electrifying unforgettable performance). She's a private investigator, on probation for an unknown crime, who had been previously hired to investigate Blomkvist during his libel trial. Unable to unearth anything tangible on him, she becomes curious when she stumbles onto his computer activity while he's trying to solve the disappearance/murder.

We learn that she is a master investigator herself and when she sends him a clue while stealthily analyzing his data, he contacts her and soon she becomes his assistant.

There are a couple of separate subplots that are necessarily laid out that beautifully explains who these characters are and add to the wonderful tapestry, as well as some graphic sequences that are not exploitive and are absolutely essential to the story. If you love a great thriller/mystery (think Agatha Cristie for the computer age) with rich characters and enough action to keep you intrigued throughout-if you relish trying to solve a puzzle-then this is the film for you!

And speaking of computers, I loved the way they're used to investigate the mystery. Director Niels Arden Oplev uses the Internet, web cams, photo-editing, scanners-you name it, to such believability, that you never doubt the authenticity of the action. (I loved the way the director uses photographs to a chilling effect throughout.) Everything from the stark cinematography, to the exquisite soundtrack by Jacob Groth, works to produce one heck of a memorable 2 1/2 hours. And don't let that running time stop you in the least. This film never stops moving from the first opening scene to the last satisfying conclusion.

When host/moderator Jonathan Pelevsky, standing in front of the near capacity audience, asked how many had read the book, over half read their hands. Judging from the Q&A that followed, and talking with several people afterward, those who read the book agreed that the film was as good or better than the novel. High praise considering that such transformations to the screen are not usually successful-especially when translating an over 800 page novel!

An American 2011 remake (groan!!!) is in the works. After seeing US film makers hack other remakes in the past, I strongly urge you to make every effort possible to see this version, especially considering it won 3 2009 Golden Beetles (Swedish Oscars) for Best Picture, Leading Actress (Rapace), as well as the Audience Award! 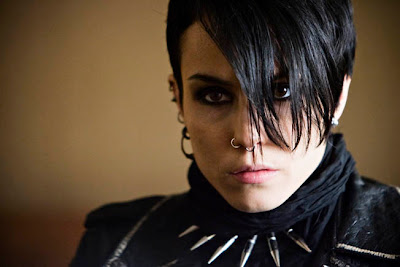 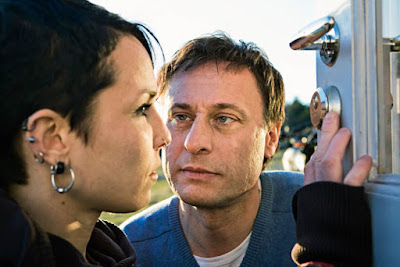 Lisbeth & Mikael (Michael Nyqvist) investigate a break-in at their cottage