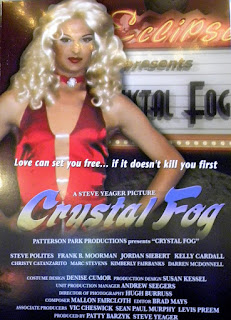 I took a brief time-off during SILVERDOCS this day to attend a special cast and crew screening of the latest narrative film by award winning Baltimore-based educator, actor, & director Steve Yeager. Steve took home the 1998 Sundance Filmmaker's Trophy for Best Documentary Award for his outstanding documentary on the early John Waters era "Divine Trash" which documented the filming of the cult classic "Pink Flamingos". He followed that up with a continuation doc on Water's early career entitled "In Bad Taste" (2000), which is still being run continuously on Bravo and The Independent Film Channel.

He's directed a number of films and theater productions but until now has never written a screen play. With this film Steve wears 4 hats: writer, director, actor, & co-producer (along with his wife Patty Barzyk). His script is loosely based on an episode of his late brother's life, who before his death in 1996, was a drag performer.

"Crystal Fog" chronicles a somewhat bazaar love triangle: middle aged Warren (FrankMoorman) meets and falls in love with the young Darren (Steve Polites) while each are attending an acting class (Yeager plays the instructor). Darren is having his ups and downs with his girlfriend when he unexpectedly meets and, even more unexpectedly, falls in love with Tommi (wonderfully played by Jordan Siebert) who performs as Crystal Fog in a local club. Needing a place to live, Darren rents a room in Warren's pad not initially aware of Warren's hidden desires and at the same time Darren is pursing the charismatic Tommi.

Yeager's smartly scripted tale focuses more on human drama and interaction than on Tommi's flamboyant world. And as Tommi, Jordan Siebert has created an intriguing character that is totally believable and tragic (he also performs & contributed the lyrics to several songs on the soundtrack). The other roles are not as successful especially Frank Moorman (who is a trained Shakespearean actor) who plays it a little over the top more often than not for my taste. However, overall kudos to the entire production which includes a fabulous soundtrack full of original songs-including a wonderful creation by singer/songwriter Viki Nova over the end credits.

Shot and filmed over 2 years in Baltimore, Yeager hopes to hit the festival circuit with "Crystal Fog" in the near future. He is currently working to complete a documentary on his late friend and Academy Award nominee Howard Rollins who tragically died of AIDS in 1996.