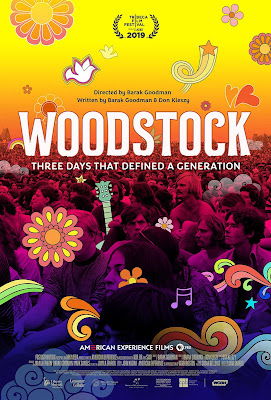 In the early summer of 1969, a college buddy of mine stopped by and asked me if I was interested in joining him in August to attend a three-day outdoor music festival being held about 100 miles north of Manhattan in rural New York.  Although I was a lover of music, and was even a current member of a local rock band, I respectively declined his offer.  That instantaneous refusal to embark with him on that adventure to Bethel, NY  has been the one major regret of my life.

As I sat there watching Barak Goodman's outstanding documentary, a wave of nostalgia and remorse wafted over me - reaffirming my missed opportunity to be a first witness to such an historic event.  The promoters figured a crowd of no more than 150,000 (50,000 per day) over the three days.  However, approximately 400,000 (some accounts put it at closer to 1/2 million) showed up.

The film begins with the impending storm that overcame the throng on day-three.  Anyone who has seen this footage should recall the scrambling folks did to take cover.  From there, Goodman shifts the focus away from Max Yasgur's diary farm on August 17, 1969 to three years earlier and begins to  document the origins of the festival amongst the surrounding backdrop of the times:  a nation grappling with sexual and civil rights issues as well as the divisiveness of the Vietnam War.

As the calendar turns to 1969, the detailing of the overwhelming logistics facing the organizers will have you shaking your head in amazement that the extravaganza was ever pulled off.  Originally, the festival was slated to occur in Wallkill, NY.  However, the conservative townsfolk feared the onslaught of "dirty hippies" and the town revoked the permit just months before the festival dates.

The organizers then spent weeks surveying the New York countryside via helicopter when they finally happened on Max Yasgur's idyllic farm in Bethel.  And after getting the conservative republican's approval to utilize his bucolic setting only months before the kickoff, they soon realized that, in order to get everything in place would have taken them well into November.  Unfortunately, August 15 was only weeks away.  Having already sold thousands of tickets, they were pass the point of no return and had to make a critical decision: do they construct a mile of fencing surrounding the property in order to reap a profit, or a stage.  Their choice was clear and the end result was declaring the "Three Days Of Peace and Love" a free-fest for all.

Barak Goodman (winner of numerous awards and nominated for an Academy Award for his 2000 documentary Scottsboro:  An American Tragedy which won a Prime-time Emmy Award, and a longtime contributor to PBS' "American Experience" series) contacted Warner Brothers for footage. WB agreed to turn over over 55 hours of unused crowd outtakes taken by three young film crews who roamed the audience (Don Kleszy masterly edited it into the documentary), but had him agree on using only only snippets of the musical performances.  Undeterred, Goodman realized that Michael Wadleigh's critically acclaimed Academy Award winning 1970 epic doc Woodstock:  3 Day of Peace & Music had already brilliantly covered that aspect of the festival.  He was more interested in the backstory.

The director avoided a never-ending parade of talking heads and instead made the correct decision of providing archival and present day voice-overs from organizers, concert participants and musicians including David Crosby, Richie Havens, and Paul Kantner (Jefferson Airplane) and placed their spoken word over the amazing visuals.  (As Goodman declared during the Q&A, this decision was easily made after realizing that showing the present-day narrators would have been a distraction and also felt that no one was interested in seeing the faces of 75 year-old ex-hippies.)  The effect, as Barak noted, was to put the viewer in the audience and to indirectly give them as profound an experience as possible without actually being there.
One of the immense pleasures of the film, and a total hoot, is the "security" force hire by the promoters:  A West Coast commune group call The Hog Farm led by a revolutionary who called himself "Wavy Gravy".  Naming themselves "The Please Force", they were surprisingly successful in keeping the peace and were instrumental in preparing much needed food and tending to folks who had overdosed.  (Barak stated in the Q&A that Wavy is unchanged today and is still considered a saint in the Bay area.)
It should be noted that there were several spectacular non-life threatening injuries which Goodman emphasizes by showing a medical inventory that will have viewers aghast in disbelief. And there were two documented deaths due to a drug overdose (surprising considering the amount of drugs consumed during the three days) and someone in a sleeping bag who was accidentally run over by a tractor.

Despite that, overall, Woodstock showed the world how hundreds of thousands of mostly young people could overcome multiple days of numerous challenges (including lack of food, medical supplies and personnel, and weather) to peacefully endure and enjoy a momentous happening which probably would and could never be duplicated in our lifetime.  As one voice-over participant stated, "If 400,000 people could get together have absolutely no violence, absolutely no conflict, I felt like we could change the world."

Woodstock:  Three Days That Defined A Generation opened theatrically on a limited basis on May 24 (it will premiere in Baltimore and Washington on June 14) and will be shown on PBS' "American Experience" in late July in honor of the 50th anniversary.
(Click on Part 1 and Part 2 and Part 3 to view the Q&A with director Barak Goodman, moderated by Ken Jacobson, Senior Documentary Film and Special Content Programmer for AFI Festivals.
NOTE:  Due to the poor lighting conditions at the venue, it took me several minutes to adjust the brightness and sharpness on my Canon Powershot HS60 camera.  However, if you stick with it, you'll be rewarded with some fascinating production and behind-the-scene facts of this superb documentary.) 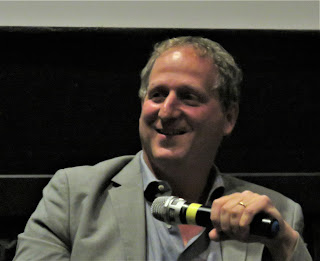 A screening attendee displays his one day ticket