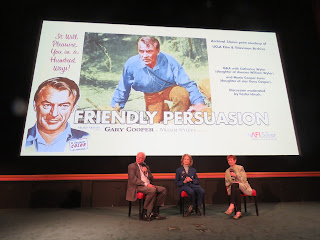 Saturday, I attended a wonderful event at the fabulous AFI Silver Theater in Silver Spring, Maryland.  A special screening of an archival 35mm print of the 1956 William Wyler directed film Friendly Persuasion starring the late great Gary Cooper, Dorothy McGuire and Anthony Perkins was followed by a fascinating Q and A with Wyler's daughter, Catherine, and Cooper's daughter, Maria Cooper Janis and moderated by film historian Foster Hirsch.

For those interested in hearing a fascinating peak into the backstory of the film and the lives of two Hollywood legends, go to my Facebook page to listen to the majority of the Q and A. 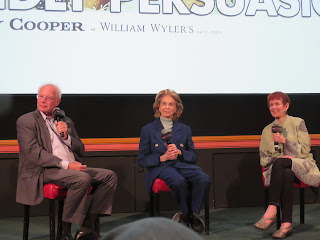 UP NEXT:  REVIEW OF THE UPCOMING SUNDANCE AWARD-WINNING PSYCHOLOGICAL THRILLER INDIE FILM "NANCY"