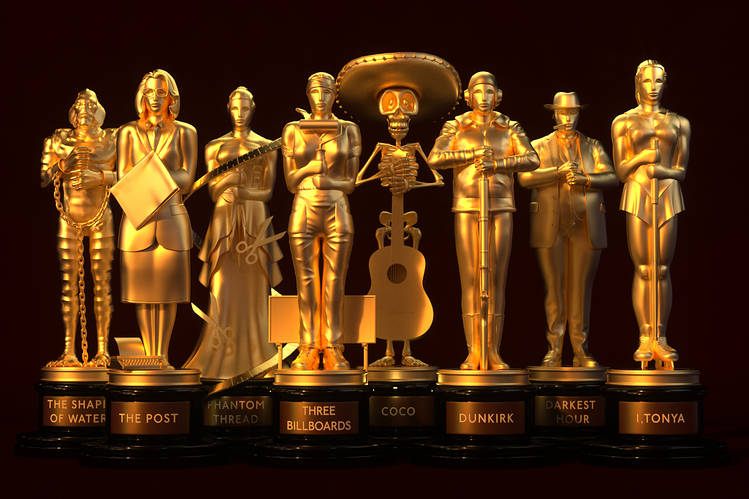 Jimmy Kimmel returned for a second go-round and, as it turns out, hosted a 204 minute political agenda show that happened to find some time to hand out 24 cinematic awards. By my (unofficial) count there were these jokes/references/mention totals by the host and others:
- #TimesUp movement:  7
- #MeToo movement:  6
- Mexico/Pence/Immigration/Fox TV Network: 6
- President Trump:  5
- Harvey Weinstein: 3

Figuring that the musical numbers for Best Song would offer a welcome respite from all the pontificating, to my utter dismay there was rapper Common prefacing "Stand Up For Something" (from Marshall) by continuing these rants ad nauseum.

I now propose a new movement for this annual overblown extravaganza:  #EliminateThePolitics. When will these "entertainment" folks, as well as the protesting athletes, most notably in the NFL, realize that their pronouncements are increasingly turning off a huge portion of the general population, like myself, who just want to be entertained.  As the NFL attendance this year has deteriorated faster than a corpse left out in the sun, so too were these final numbers for the ABC telecast:  Viewership hit a record low of 26.5 million - down a whooping 20% from last years 33 million.  The new meager embarrassing total destroyed the old record of 32 million set in 2008 when Jon Steward hosted 11 weeks after the conclusion of the writers' strike that had incapacitated other award shows.  Hollywood:  are you getting the message??  Unfortunately, I doubt it.

Of course it didn't help that there was no standout universally appealing film this year that captured the public's interest.  (Top award winners The Shape Of Water and 3 Billboards Outside Ebbing, Missouri  have garnered domestic box office totals of $56 and $52 million, respectively.)  At best, I gave a couple of the Best Picture nominees 3 1/2 stars (out of 4) - an overall disappointing year for this reviewer.

As for Kimmel, look for him to be a mainstay as the future Oscar host for the mostly left-leaning Hollywood elitists.  That being said, he was adequate and appeared relaxed in the role but, again, how many fans have ultimately abandoned the late-night host, as well as this annual telecast, no matter who hosts, because of the above?

My annual apologies to Sergio Leone, as this breakdown will pretty much sum up the event through this reviewer's eyes:

- It was nice that the producers found the time to actually hand out awards.

- The "star" of the evening might have been the ever-changing set/stage that formed the evening's backdrop.  A somewhat gaudy yet interestingly spectacular presentation that correctly reflected the absolute pretentiousness of Hollywood.

- Usually the highlight of every Oscars are the film clips from the past that take us back to why we love the movies.  All the major acting awards this year were preceded by corresponding glimpses of past winners.

- The wonderful montage celebrating the 90 years of Oscar.

- The montage of 90 years honoring the military in movies introduced by Vietnam vet Wes Studi (Hostiles) who became the first native american (Cherokee) to present at The Academy Awards.

- Pearl Jam's Eddie Vedder wonderful rendition of Tom Petty's "Room At The Top" during the "In Memoriam" segment - made all the more poignant considering the recent premature demise of the talented pop star.

- The elimination of the speech by the president of The Academy which yearly halts any momentum the telecast may have.

- There was no repeat of last year's disastrous announcement of the wrong winner (although it might have made the program much more interesting than it was).

- The show started a half-hour earlier than usual to allow viewers to get to bed earlier.

- The show is still about at least an hour too long as it clocked in this year at 204 minutes.

- Unending monotonous non-humorous repartee from the majority of the presenters.

- Although most speeches ended before the requisite "reminder" from the orchestra, there was the notable exception when winner Robert Lopez was accepting for Best Original Song ("Remember Me" from Coco) who was rudely interrupted as he began to pay tribute to his deceased mother.  One of the more uncomfortable moments.

- The performance of "Remember Me" that began with a rather amateurish turn by actor Gale Garcia Bernal followed by an equally uninspired production number.  The victorious song writers were thankful it wasn't a consideration for winning the award!

- Having the embarrassing moment with presenters tied to a nominated film in the category they are presenting - and then lose.  This happened with Ansel Elgort and Eiza Gonzalez presenting the sound awards and then putting on a happy face when Dunkirk won over their film Baby Driver.

- The show's overnight ratings (see above).

- The yearly scratching-your-head omissions from the In Memorium segment.  Among the most notable names left off the 51-name list:  Adam West, directors Tobe Hooper and Bruce Brown, Glen Campbell, Dina Merrill, Powers Boothe, Dorothy Malone, Miguel Ferrer, Rose Marie, John Mahony, Jim Nabors and Robert Guillaume.  It is understood that there were too many mentions for a three to four minute segment.  So maybe a slightly longer accompanying song is warranted in the future for unusually lengthy lists.  The bottom line:  If you are going to do this, then do it right!

- Kobe Bryant (?!) winning for the short film Dear Basketball.  Imagine how life-long struggling filmmakers must have felt to see Bryant, accused of sexual misconduct in 2003, step up to the podium.  In the midst of the #MeToo movement, the hypocrisy of the Hollywood faithful has never been so clearly evident.

-The orchestra began playing just before co-producer J. Miles Dale (The Shape Of Water) was about to speak after his and co-producer Guillermo del Toro's film won the biggest award of the night.

- The noticeably tepid response by the audience at the conclusion of the military clips, who had no trouble giving standing ovations for a musical performance but gave mild claps and annoyed faces after the tribute.

THE BIGGEST SURPRISE WINNER
Director Jordan Peele for his original screenplay for Get Out.  Not that it didn't deserved to win, but Hollywood rarely honors a script with a horror theme.

THE LEAST SURPRISING WINNER
Mark Bridges for his costume designing for Phantom Thread.  As I stated in my predictions column, a film about an elite fashion designer better win this award or Bridges might have difficulty finding work in the future.

THE BEST ENDING TO THE LONGEST LOSING STREAK IN OSCAR HISTORY
Fourteen is finally the charm for the immensely talented cinematographer Roger Deakins who won for Blade Runner 2049.

MOST TOUCHING ACCEPTANCE SPEECH
Longtime indie actor Sam Rockwell (Best Supporting Actor for 3 Billboards Outside Ebbing), who proclaimed, "I'd like to thank the academy.  I never thought I'd say those words" and then proceeded to dedicate the award to his late friend Philip Seymour Hoffman.

MOST MEMORABLE SPEECH
Best Actress Frances McDormand (3 Billboards Outside Ebbing) who took her moment to honor all the female nominees by having them stand to be acknowledged while calling for diversity inclusion riders in studio contracts.

MOST HUMOROUS ACCEPTANCE SPEECH
Best Supporting Actress Allison Janney (I, Tonya) who, instead of rattling off a list of thank-yous, proclaimed, "I did it myself".

MOST OSCARS WON
The Shape of Water with 4 of its 13 nominations.

THE BEST PLATFORM FOR HOLLYWOOD FORWARDING A POLITICAL AGENDA
The 2018 Oscars telecast.

BEST RUNNING JOKE
Kimmel's offer to award a jet ski and a trip to Arizona to the winner with the briefest speech.

BEST RUNNING UNORIGINAL JOKE
Kimmel's ski bit.  In 2000, a giant screen TV was offered to the winner with the shortest speech.

FUNNIEST MOMENT
Get Out's Lakeith Stanfield who threaten, in character, to run onstage screaming "Get Out" to any awardees whose acceptance speech goes on too long.  (If you saw the film, you'd understand the setup.)

THE THIRD FUNNIEST MOMENT
Jane Fonda commenting that the beyond elaborate stage reminded her of the Orgasmatron from her classic film Barbarella.

THE BEST PRERECORDED BIT
A humorous homage to Stanley Kubrick's The Shining with a commercial ad for the Overlook Hotel which was the haunted setting for the classic film.

SHORTEST ACCEPTANCE SPEECH
Costume designer Mark Bridges who walked off the podium with an Oscar and, later, a jet ski.

THE LONGEST BIT THAT  UNNECESSARILY ADDED TO THE RUNNING TIME OF THE TELECAST
Where last year Kimmel brought unsuspecting bus-touring folks into the Dolby Theater, this time he took celebrities from the audience into a movie theater across the street where there was a preview screening of Disney's A Winkle In Time.  Having food and souvenir items thrown into the crowd went tiresomely on way too long.

FUNNIEST PRESENTERS
A shoeless Tiffany Haddish (Girls Trip) and Maya Rudolph (Bridesmaids) who began their humorous repartee by saying that, "We know what you're thinking, are the Oscars too black now?" They have my ardent vote to replace Kimmel.

THE RECIPIENT OF THE LONGEST NON-POLITICAL RUNNING JOKE
Octogenarian Christopher Plummer, who seemed increasingly annoyed as the beneficiary of Kimmel's incessant age jokes.

THE #2 WTF MOMENT
Kimmel walking up to Steven Spielberg and asking him for pot.

BEST MONTAGE
Film clips covering 90 years of film and ending with a thank-you to moviegoers over those years.

BEST ENTRANCE BY A HOLLYWOOD LEGEND
86-year-old Rita Moreno who sashayed her way to the podium wearing a version of the same dress she wore while accepting her Best Supporting Actress Award in 1962 (West Side Story).

THE OLDEST PRESENTER
93-year-old Eva Marie Saint who proclaimed she was older than Oscar.

THE COUNTRIES WITH THE MOST OSCAR WINS
Latin America in general and Mexico in particular. 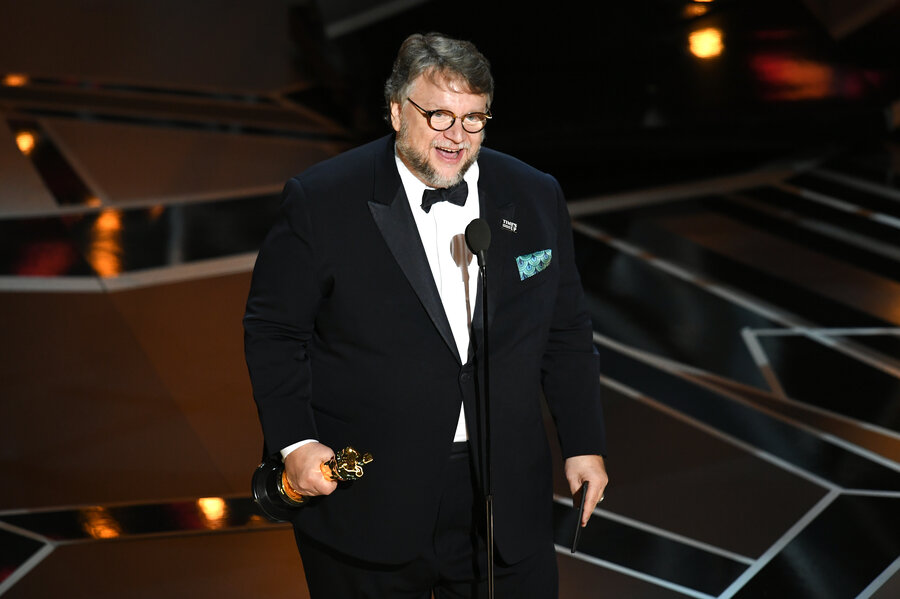 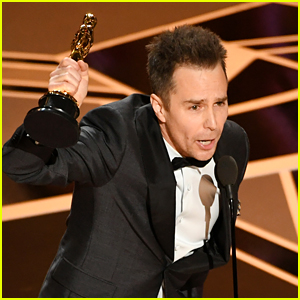 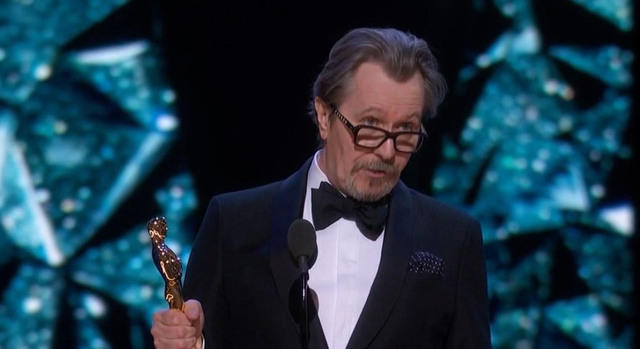 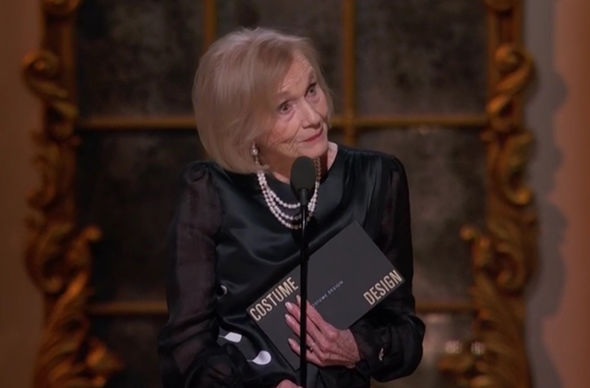 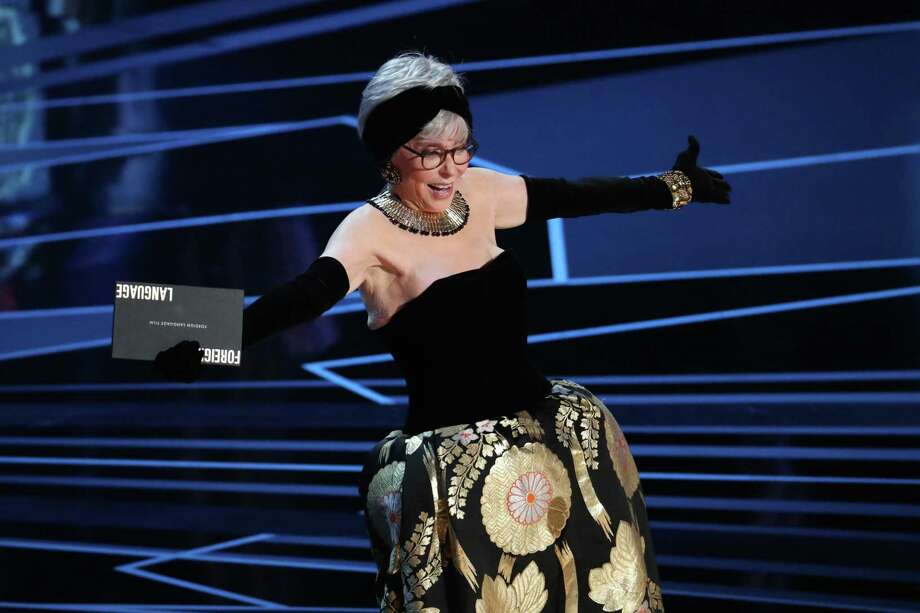 Songstress Keala Settle performing "This Is Me"