There is a lot to recommend about this filmic adaptation of Maurice Sendek's 1963 beloved children's picture book. Writer/director Spike Jonz' ("Being John Malkovich", "Adaptation", "3 Kings") has expanded the extremely sparse narrative (the book contains a handful of sentences comprising 338 total words!), while using Jim Henson's creature shop & CGI to recreate the fanciful drawings of the original source. The result is an intriguing, yet overlong, look into the mindset of most pre-teens who are striving to be accepted and loved by everyone around them.

Max (Max Records, who first appeared in 2008's "The Brothers Bloom") is a precocious hyperactive kid who just can't seem to connect with friends, siblings, & mom (Catherine Keener-a Jonze fav). After a run-in with his single parent, Max wanders off in his wolf suit and his imagination wanders off in a boat that takes him to a wondrous island inhabited by fascinating creatures who, at first, want to eat the dude. After Max stands his ground, they quickly decide to anoint him king.

What happens next is . . . well, not much to be honest. Each of the creatures has voices of famous actors (James Gandolfini, Paul Dano, Catherine O'Hara, Forrest Whitaker, Chris Cooper, & Lauren Ambrose) that, if you close your eyes, you can picture their human form. The middle third of the film has them cavorting, constructing a fort, being jealous and vindictive. All the while Max tries to maintain control and keep together his new-found subjects.

The soundtrack by the talented Carter Burwell is original for this kind of film, & the Australia locations are breathless and beautifully integrated into the visuals-but after a while, I started to zone out. Although the creatures were initially intriguing, the paper thin plot doesn't hold up as well over the 141 minute running time.

I get the angst that Max experiences that translate into the imaginative "story" of trying to gain acceptance, and finally realizing that "there's no place like home". The real question is what minimum age should the child be to see the darkness that is on the screen? Well, the answer is, it depends. It depends on the emotional level of the child to recognize that Max's imaginary world is sort of a microcosm of the real world and hopefully won't be totally freaked out when there is talk of devouring a little child. 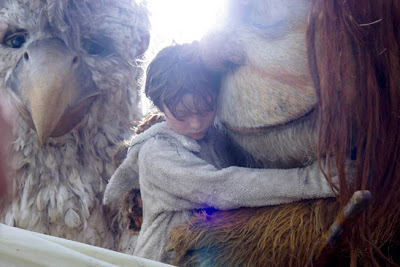 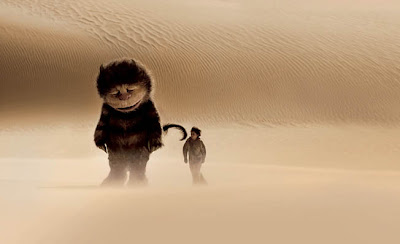