Who would have thought that a comedic take on hair would be so controversial? Or that anyone could actually fill out 95 minutes on the topic? Leave it to Chris Rock to raise the ire of such a large class of humans (the female black population) while being so informative and entertaining at the same time.

Rock (who co-wrote the script along with director Jeff Stilson, Lance Crouther, Chuck Sclar) is front and center of the action as he takes us into this "secretive" culture which is a 9 billion dollar industry. Secretive, because who knew the expense, pain, and trauma black women (and children) endure to obtain straight hair &/or hair extensions?

The doc takes a while to get going, and I kept wondering if the topic would hold my interest, but when it finally hits its stride, there are as many eye opening revelations as laughs to be had. The film is centered on the 60th (!) annual event held in Atlanta that is sort of a combination hair products show & American Idol for hair stylists. The theatrical contest (which occupies the last part of the film) is the highlight of the Bonner Brothers International Hair show that is also a convention showcasing hair product companies.

Early on, Rock and his crew take us into the black -owned Dudley Products in Atlanta, (considered the industry's world leader), then over to India, where women, who have their heads shaved in a religious ceremony, ship the locks off for a profit. We are taken to a lab to show the effects sodium hydroxide has on a soda can (not pretty!)-especially noteworthy since this is the chemical women and children place on their head-and would explain the burning sensation these humans experience when using the hair products that contain it. And we visit a barbershop where black men humorously discuss their take on the whole subject with hilarious and revealing dialogue.

Interspersed throughout are entertaining interviews with such notables as Maya Angelou , Nia Long, Ice-T, Salt-n-Pepa, Al Sharpton, & Raven Symone, among others (where was Don King?).
All the while Rock provides the narration and one-liners that is his trademark.

But it is the final contest in Atlanta, that curiously has no relation to hair styling, that neatly wraps up the proceedings and feature an under water act and upside down hair cutting! And who would have thought that the favorite to win each year was a white dude!!

The documentary has been in limited release since October 9th & opens in Baltimore on Friday October 30th. 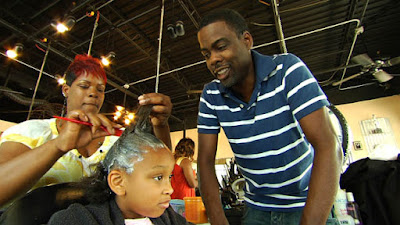