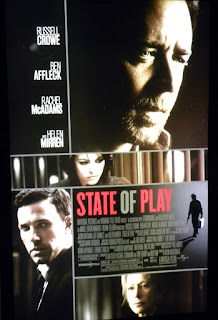 Director Kevin MacDonald hasn't produced a large body of work but when he does, he's been spot-on! He started with his documentary on the 1972 Munich Olympic tragedy, "One Day In September" which won the AA Best Documentary in 1999. He then turned narrative with the wonderful 2004 "Touching the Void", followed by one of my favorites from 2006 "The Last King of Scotland", which won Forrest Whitaker the much deserved Best Actor Oscar.

His directorial record is intact with the intriguing newspaper/political thriller "State of Play". Not since "All The President's Men", in my opinion, has this genre been so successfully tackled. And coming at a time when the print media is being relegated more and more onto a computer screen instead of the daily fish wrap.

Based on the multi-award winning 6-part 2003 BBC series, the film stars the always excellent Russell Crowe (filling in after Brad Pitt bowed out) who tried to hide his pretty boy self with mucho extra pounds, and growing his hair into a greasy mess playing hardened newspaper reporter Cal Mcaffrey. He enters the scene after a series of seemingly unrelated killings around Washington D.C. Putting the pieces together, and maybe too quickly, he leads the investigation teamed with an audacious rookie reporter, played confidently by Rachel McAdams, who is more interested in posting immediate Internet gossip tidbits than in checking out the details typically done with the style and finesse of someone as seasoned as Mcaffrey. Caught up in all of this intrigue is a prominent congressman (Ben Affleck-whose performance is the weakest of the lot), whose role in all of this is never fully defined or realized until the end.

Present are some excellent supporting characters including Robin Wright Penn, who plays Affleck's wife and the talented Helen Mirren (who plays the editor of the fictitious Washington paper) who is more concerned with how fast the story can be scooped-no matter the cost-as her paper comes face to face with the dismal economic downturn that, nowadays, is being faced by the majority of print media.

The competent screenplay was a corroboration between Matthew Michael Carnahan ("The Kingdom" & "Lions for Lambs"), Tony Gilroy ("Michael Clayton" & "The Bourne Ultimatum") and Billy Ray ("Shattered Glass"). Alex Heffes, who did the non obtrusive score, also worked with MacDonald on "One Day In September" and "The Last King of Scotland".

What didn't work for me was that so much is crammed into the over 2 hour film that you'll need a scorecard to figure it all out-or at least a companion or two to run by some plot points with later on. And the speed in which Crowe solves so many things so quickly is probably due to shrinking the 6 hour mini-series into a third of its original running time.

Despite that, you will be entertained enough by a riveting story and some fine acting that it is easy to forgive its slight failings.