(Below is a recap of my review of the opening night film at the inaugural Investigative Film Festival in D.C.  Full coverage of the festival, including photos and reviews, are below this post.)

Another gem from writer/director Tom McCarthy (writer/director of 2003's terrific independent film The Station Agent and screenwriter for the animated Up from 2009). With a riveting screenplay (co-written with Josh Singer) and an excellent ensemble cast, including Michael Keaton, Mark Ruffalo, Rachel McAdams, Liev Schreiber, Brian d'Arcy and Stanley Tucci, this was the perfect film to kick-off and emphasize the focus and goals for an investigative film festival.

Just months after 9/11, another blockbuster revelation literally grabbed the headlines that first appeared in The Boston Globe on January 2, 2002: “­ Church Allowed Abuse by Priest for Years”. The Globe's investigative team, know as Spotlight, was responsible for unearthing the abuse which, as it turns out, had been stealthily occurring in Boston for years. The film will bring to mind another great old-fashion newspaper movie, 1976's All the President's Men, as it details the painstaking work to uncover and ultimately bring to print the scandalous misdeeds. They ultimately unearthed about seventy cases in Boston alone and led to the disgracement of ­Cardinal Bernard Law, the Archbishop of Boston, who was later banished to Rome. The group's efforts earned them a well-deserved Pulitzer Prize in 2003 and since resulted in the revelation of multiple acts of clergy abuse in cities in the US and around the world – a fact that is hammered home in the rolling coda list at the film's conclusion.

Spotlight is one of the finest films this year and is certain to be well-represented at next years Academy Awards. The movie opened on a limited release on November 6. 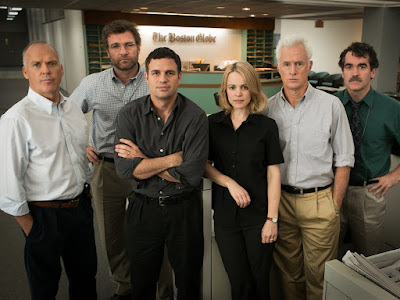