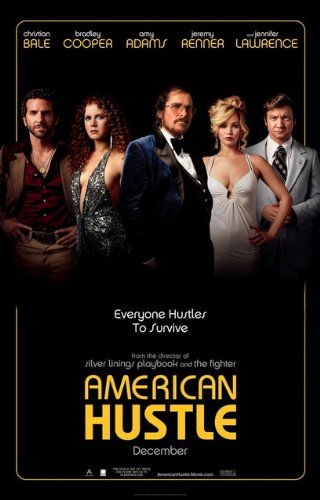 Wednesday December 18, 2013
Writer/director David O. Russell is becoming one of those talents who does not know how to make a poor movie.  Beginning with his debut 1994 film "Spanking the Monkey" through 2012's multi-Oscar nominated "Silver Linings Playbook", the American director keeps churning out critical hit after hit.

Once again, using several of the ensemble cast members from SLP as well as his previous work, and a distinctive 70s retro look (particularly the outrageous 70s styles and fashions), Russell combines humor and drama to produce one of this year's best film.  The 70's is considered by most critics as the golden Age of Hollywood-a period in which this film is clearly enamored.

The film is loosely based on The Abscam Affair (I loved the opening title that pointed out that "some of this actually happened").  The convoluted tale takes place in 1978 New Jersey and involves a con to ensnarl corrupt politicians trying to profit from the newly established casino industry in Atlantic City.  Without revealing too many plot points, it is best to just sit back and watch master acting by some of moviedom's finest talent as they lead you through the intricate story and fun.

Christian Bale is nearly unrecognizable in the title role as dry cleaning owner/con artist, Irving Rosenfeld.  Gaining 45 pounds, a hideous comb over and a Brooklyn accent, the handsome English actor leaves his Batman persona in the dust and proves, once again, that he is one of the best actors on the planet.  A vampy Amy Adams is outstanding playing Bales partner in crime and love interest.  Bradley Cooper portrays an over-the-top FBI agent (seeing him in pink curlers is nothing short of hilarious) hell bent on making a name for himself.  While Jennifer Lawrence, as Bales estranged spouse, continues her impressive acting resume with a white trashy Jersey Housewife impersonation that could garner her back-to-back Oscars.  Lawrence steals every scene in which she appears.  And in a smaller role, Jeremy Renner is miles away from his gritty role in The Hurt Locker playing a corrupt (or is he?) mayor.

My only complaint is that I would have wished for a slightly shorter running time as Russell's script seemed to run out of steam around the 100 minute mark.  However, overall, American Hustle provided one of the most satisfying times this critic has experienced in 2013.