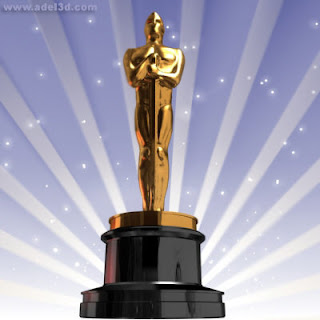 This year's 215 minutes edition improved by 22 minutes over last year's show-still way too long in this reviewer's opinion-but getting better.  As for host Seth McFarlane-he's one and done.   This is by his admission- although, considering the firestorms he created (more on that below) those associated with choosing the host would likely have made that same decision had he not beat them to it.  The Academy returned to their efforts to wrangle in a younger audience by selecting the talented McFarlane-and succeeded by upping the percentage of viewers 11% higher than last year.  However, their search for a permanent host continues.

Again, with apologies to Sergio Leone, this breakdown will pretty much sum up the event through this reviewer's eyes:

The Good
-Despite his occasional tastelessness, I rated McFarlane as "Good" in the utterly thankless job as host.  Anyone who knows anything about Seth knew that they would be getting a lot more bite than the usual cream puffs and gentle jabs that came from last year's archaic Billy Crystal.  Not as controversial as Ricky Gervais, McFarlane managed to have me laughing at a couple of good zingers (the best of which came early on when, alluding to the omission of Affleck as Best Director, he commented that the secrecy of "Argo" was so good, the academy didn't know who directed the film).  And his retelling of "Flight" using sock puppets brought a few solid laughs; while his CGI skit with Ted, the raunchy Teddy Bear was much less successful. However, I give him an overall passing grade for his efforts.  It seems only a matter of time that Tina Fey and Amy Poehler will be promoted from the Golden Globes to host now that the slot is open once again.  My host vote would go to my personal favorite:  Hugh Jackman-who was brilliant fronting the 2009 Oscars.

-I personally liked the decision to emphasize the celebration of music in the cinema and the extravaganza delivered in spades with some incredible numbers.  Highlights included a (rare) appearance of Barbra Streisand  reprieving "The Way We Were", Catherine Zeta-Jones and ensemble performing "All That Jazz" from "Chicago", Shirley Bassey belting out "Goldfinger" wrapping up the Bond tribute  and a medley by the entire cast from the multi-nominated "Les Miserables".  Each was magnificently staged with performances to match.  The only negative:  why no mention of the early Hollywood musicals-which were conspicuously absent?

-The Academy did a competent, albeit all too brief, salute celebrating 50 years of Bond flicks-the most successful franchise in film history.  However, the Academy missed a golden opportunity to gather all the Bonds (all of whom are still walking the planet) onstage at its conclusion.  That would have definitely upped the "wow" factor for its tribute.

-The sweet orchestral cues used in the past to end overlong acceptance speeches were replaced with the ominous musical chords from "Jaws".  The only thing better would be to have the SNL shark enter from stage right to clamp itself on the head of the verbose award winner spouting his/her endless thank-you's.

The Bad
-What probably seemed brilliant on paper but mostly flopped in execution was the overlong bit with TVs (??) Captain Kirk (William Shatner) beaming in from the future and commenting on McFarlane's job as host.  Not a solid way to jump start the 3 1/2 hours.

-The usual glaring omissions from the Memoriam segment:  most notably Andy Griffith (whose career blossomed after his riveting performance in Elia Kazan's "A Face in the Crowd"), Alex Karras ("Blazing Saddles") and Richard Dawson ("The Running Man").  And the omission of Lupe Ontiveros ("Real Women Have Curves") drew the ire of  The National Hispanic Media Coalition.

-The fashion police issued tickets for Tarantino's outfit and unkempt look, and for Ann Hathaway's dress which did nothing to hide the fact that she was bra-less.  (Personally, I didn't mind the latter-but I'm not part of the FP squad.)

-For those of you who were still awake, Jennifer Lawrence's trip up the steps to the podium.

-"Jaws" music ushering off the "Life of Pi" visual effects team who were in the midst of making a plea for the financially strapped effects company Rhythm and Hues.

-McFarlane and (the annoying) Kristin Chenoweth (whose coverage of the Red Carpet pre-show made us yearn for Joan Rivers) wrapping it all up with a song about the Oscar losers.  As if losing wasn't bad enough, these folks had to have their noses rubbed into it.

BIGGEST SURPRISE WINNER
Most experts predicted a wide-open contest for many of the major awards and surmised more surprises were in store than in previous years.  As it turns out, the only real major upset was the first awardee when Christof Waltz won for Best Supporting Actor beating out front-runners Robert DiNiro and Tommy Lee Jones.  The German-born actor has now won two supporting awards for both of the Tarantino directed films in which he has appeared.

BIGGEST SURPRISE LOSER
Stephen Spielberg.  Most prognosticators correctly predicted that "Argo" would replace the early front-runner "Lincoln" for Best Picture.  However, few predicted that he would lose out to Ang Lee or to any of the other nominees.  (That sound you hear is me patting my back as I correctly predicted Lee would and should win for the film that should have won BP.)   In fact, "Life of Pi" won a total of four AA's (the most of any other nominated film).  Lee previously won for Best Director for "Brokeback Mountain" which interestingly also did not win Best Picture in 2005.

BIGGEST DISAPPOINTMENT
"Life of Pi" not receiving Best Picture.  For me LOP was clearly the best film of the year with "Silver Linings Playbook" second.  "Argo" was not even in my top five of the nine nominees.

BEST ACCEPTANCE SPEECH
Daniel Day-Lewis.  The consummate actor started brilliantly.  Referencing the chameleon nature of their acting roles, he joked that he was originally selected to play Margaret Thatcher over presenter Meryl Streep, who was Spielberg's first choice to portray Lincoln.  He followed that with a witty and heart-warming acceptance speech that was as memorable as any in recent memory.

2ND BEST ACCEPTANCE SPEECH
Ben Affleck.  When it came to his turn to accept for Best Picture, the tear-eyed actor/director was gracious, genuine and humble without referencing his Best Director snub.

3RD BEST ACCEPTANCE SPEECH
Quentin Tarantino.  In another mild upset, his winning the Best Original Screenplay Oscar further solidifies his enormous writing talent, and his "Gee Whizz!" acceptance speeches never fail to please and put a smile on your face.

BEST RECOVERY FROM A DISASTROUS MOMENT
Jennifer Lawrence's wonderful all-too-short acceptance speech after tripping on her gown while maneuvering up the stairs to the podium.  Her first comment that the standing ovation she received was due to the fact that everyone felt bad that she fell, put everyone at ease.  She then promptly delivered the third best speech of the evening.

MOST PAINFUL PRESENTERS
Five actors from "The Avengers".  Their banter was greeted with nearly total silence.  More embarrassing than Jennifer Lawrence's fall.

MOST UNUSUAL MOMENT
The tie for Best Sound Editing going to "Skyfall" and "Zero Dark Thirty" (its only Oscar).  Only the 6th time in Oscar history (the last tie happening in1995).  Plus the two winners had long blond hair making both to appear to have the same hair dresser.

BEST CINEMATOGRAPHER NEVER TO WIN AN OSCAR
The extremely talented Roger Deakins. He's now 0 for 10!  Cinematographer for over 60 titles (including DP for the The Coen Brothers), look for him reeling in an Honorary Oscar if this undeserving losing streak continues.