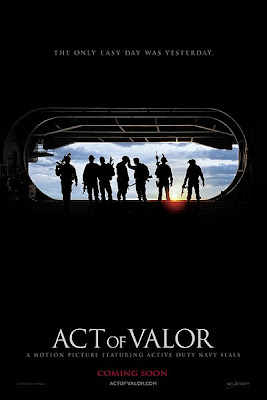 If you are thinking about enlisting in the Navy Seals (which, by the way, is the acronym for Sea, Air, and Land), boy, is this the film for you.  However, if you are interested in being entertained by a movie which incorporates actual Seals standing in for professional actors, speaking a script that is as baffling as a foreign movie without subtitles, well, you might want to take in another flick at your local megaplex.

Co-directors Mike McCoy and Scott Waugh took 2 years to create what must have seemed like a good idea at the time:  Use actual Seals and real bullets to put the viewing audience, as authentically as possible, into their boots.

However, there is a reason studios pay professional actors to put realism on the screen when millions of dollars are on the line.  Unfortunately for them, acting is not a part of Navy Seal training.  And, no matter how grandiose the action sequences are staged (and that is the only redeeming element in this mess), it is not enough to validate spending your time or money on what ultimately can be labeled a Military recruiting film.

The fictional story basically revolves around a plot involving terrorists aiming to bomb major U.S. cities.  Various locales around the world are visited trying to tie all the confusing story lines together that, in the end, had me scratching my head while checking the time on my watch.

The action sequences are well staged (half of the budget must have been for bullets).  However, the stilted "acting" using an inane script by screenwriter Kurt Johnstad (2007's "300") with the incessant use of indecipherable military technical jargon, is so overwrought that it eventually destroyed my focus and interest.

A rah-rah film for the good 'ol USA (the right-wingers will love this one), "Act of Valor" opens nationwide on February 24.

The Seals start their mission by air