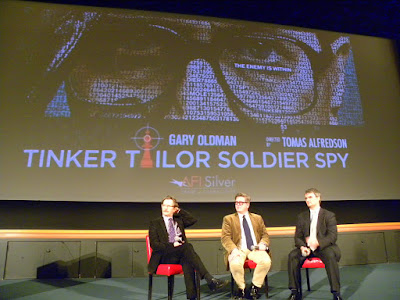 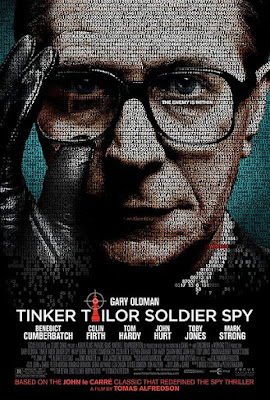 Monday November 21, 2011
Off to Silver Spring to screen the closing night film of the 24th AFI European Union Film Showcase, "Tinker Tailor Soldier Spy" with an appearance by British actor Gary Oldman and Swedish director Tomas Alfredson (see coverage below following this review).   Tomas' previous film was the outstanding 2008 coming-of-age vampire classic "Let the Right One In".  (Although "Cloverfield" director Matt Reeve's 2010 U.S. remake "Let Me In" is admirable, it is nowhere as accomplished as the Swedish original.)
For his second commercial project, the director tackles John le Carré's 1974 bestselling spy novel that was initially made into a seven part, 350-minute BBC 1979 TV series starring Alec Guinness.  And herein lies part of the problem:  compacting the considerably dense spy novel into the 2 hour plus running time practically demands background knowledge of the story and a scorecard to keep track of the myriad of characters that comprise the wordy screenplay.
It is the 1970's Cold War and a British intelligent agent (Mark Strong) is killed in Hungary resulting in the firing of top agent George Smiley (a subdued but effective Gary Oldman in the Alec Guinness role) and his boss, Control (the wonderful John Hurt).  However, Smiley is brought back in to uncover the Russian mole within the MI6 (the British Secret Service Intelligence agency-code named "The Circus") who was responsible for the assassination.  With the help of Circus agent Peter Guillam (Benedict Cumberbatch) and field agent Ricki Tarr (Tom Hardy), Smiley ultimately narrows the Mole's identity to Percy ("Tinker"-Toby Jones), Bill Haydon (the well-dressed "Tailor"-Colin Firth), Roy Bland ("Soldier"-Ciarán Hinds), and Toy ("Poor Man"-David Dencik).
The incredibly talented cast is matched in mood through DP Hoyte van Hoytema's cinematography, and the intricate production design by Maria Djurkovic.
Those willing to devote their time and rapt attention, and not expecting any James Bond-like pyrotechnics and chase sequences, should ultimately be rewarded with an intelligent screenplay by Peter Straughan and his late wife Bridget O’Connor, as well as outstanding ensemble acting and production values.  Just be certain that you have your have your fill of caffeine or else you might miss the spy thriller's climax.
The movie began a limited U.S. platform release December 9, including Washington D.C. 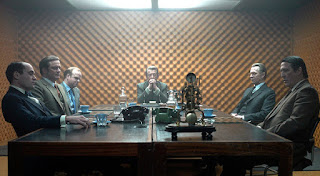 (l to r), "Poor Man" (David Dencik), "Tailor" (Colin Firth),
"Tinker" (Toby Jones), Control (John Hurt),
George Smiley (Gary Oldman), and "Soldier" (Ciaran Hinds)
-------------------------------------------------------------------
Following the screening was an extended interview/question and answer session moderated by AFI Programmer Todd Hitchcock.  In response to Todd's question as to what he saw was appealing about the role of George Smiley and what was the challenge that he had to figure out, Gary knew that  Guinness had made the role so iconic so he tried to bring his own interpretation after reading the books.  He pointed out that Alec was nearly 70 when he did the series, so there was that difference to explore.  He realized they were mining the same material and that there were places that they both would meet.  However, there were other shades to Smiley that initially presented the challenge of doing the role differently.  Overcoming Guinness' towering performance, that for many was the definitive portrayal of the character, was a challenge-but gave credit to Alfredson for having great faith in him.

Todd then asked Tomas to explain how he went from making "an incredibly inventive vampire movie in Sweden" to pursuing John le Carree's spy material in the U.K.  Tomas revealed that it was quite hard to explain why one accepts to start working on a project.  However, he did say that when opening a script or, in this case a book, it is a very emotional thing.  If he gets many images in his head and if he reacts very quickly, for example, crying, laughing, or his heart starts beating, for him, it is the big impulse he needs to accept a project.  He also commented that he felt "Let the Right One In" was not a vampire movie but was a story about a young kid, and that this film was not an espionage film.  For him it was about the soldiers of the Cold War, and that it was a very personal and emotional journey about relationships.

Todd pointed out that since the film is a 70's Cold War period piece, and asked if it had a contemporary resonate with the U.K. audience considering the film's tremendous popularity in that country.  Gary responded that a great deal really has not changed over the years-other than the faces and the enemy and  remarked that he personally gets the same kind of sensation watching the news today as he got when was fifteen-years-old.

Gary mentioned that he saw the original series but did not want to use it as a template or revisit it-that he did not want to be contaminated with an impersonation.  He remembered it as "this big ghost that cast a shadow and I was terrified".

When asked by an audience member about a possible sequel covering the remaining books, Tomas replied that there might be one or two films in the future.

A question was raised as to why Tomas decided to use an old Julio Iglesias live disco version of "La Mer" over the last four minutes of the the action, which was contrary to the overall somber mood set throughout the movie.  Tomas stated that during the scenes when George was listening to music in his apartment he thought about using a soundtrack that gave a glimpse of George's inner life.  He eschewed the use of opera since the director thought of him as a romantic-which would be the total opposite of the life he lived in gray and dull England, and immediately he thought of Iglesias.  However, Tomas did not use it there because "it would be a little too strange".  However, he did find a rare vinyl recording of Iglesias' "La Mer" and decided to use it in the final scenes to "bring in a little fresh air" which would have the effect of "opening a window".  He thought the song created that feeling, and that its use was not supposed to create a happy end feeling.

Gary was quizzed about his favorite role (he's been in over 60 films over the past 25 years!) and said it would be playing Lee Harvey Oswald (in Oliver Stone's 1991 film "JFK), stating that it was an exceptional experience because there was little of the character on the page.  Stone instructed Oldman to thoroughly research Oswald to prepare him for the part.  He also mentioned Tony Scott's 1993 action adventure "True Romance".  Gary then added that he has jokingly said that he's been waiting over 30 years to play the part of George Smiley explaining that in the past he has played characters who physicalized their emotions and that it was a joy not having to express it in a physical way in this film.

When asked whether he plans to direct another film (he directed "Nils By Mouth" in 1997), Gary said he would like to but bringing up two boys has taken up a lot of his time.  However, he said he was looking at a couple of projects and is hopeful he can direct one within a couple of years. 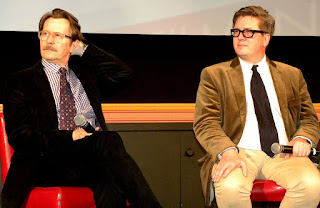