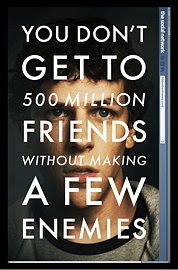 Director David Fincher's "The Curious Case of Benjamin Button" was my favorite film in 2008 and should have taken home the coveted Best Picture Award (won by "Slumdog Millionaire"). Fincher goes from fantasy/adventure to this docudrama and, will most likely be in strong contention for this year's award. Shown mainly in flashbacks, we methodically see how the dude who created Facebook, almost by fluke, became in a few short years the planet's youngest billionaire.

Harvard student & computer nerd Mark Zuckerberg (Jesse Eisenberg in a breakout role that will undoubtedly get him AA consideration), upset at being dumped at a restaurant by his girlfriend (Rooney Mara-set to play the latest Lisbeth Salander in the Americanized version of "The Girl With the Dragon Tattoo") in a brilliant nine minute opening scene, decides to get back by immediately creating an online on campus woman rating page using the head shots of Harvard coeds. After the campus servers crash from all of the ensuing traffic, Mark is contacted by jock twins, future Olympic rowers, Cameron and Tyler Winklevoss (both seamlessly played by Armie Hammer) who have a "Facebook" idea but need Zuckerberg's genius to bring it to fruition. Realizing he would never be accepted in their "club" Mark takes their idea and runs with it-all for himself. (One of the legal deposition scenes involves their lawsuit against the now successful Facebook CEO.)

The two main supporting characters are Eduardo (competently played by Andrew Garfield-currently in "Never Let Me Go") who is Mark's only friend who became his early financier-only to be later dumped by the heartless Zuckerberg. (Also included are deposition scenes involving his lawsuit against his longtime friend and co-founder.) And Justin Timberlake (forget 'N Sync, folks-this guy can act! Look for an AA Supporting Actor nom) as Napster & Plaxo founder Sean Parker who takes Mark by the shirt collar and introduces him to Silicon Valley with all the accompanying wild woman, parties, & drugs.

However, the real star is the spectacular rapid fire spot-on dizzying script (based on Ben Mezrich's book "The Accidental Billionaires") by "West Wing" scribe Aaron Sorkin who also wrote the "Charlie Wilson's War" & "The American President" screenplays. It is almost as if Sorkin were being paid by the word, as one's utmost attention is a requisite to getting the most juice out of his wonderful delicious script. My main beef was that, although the pulsating soundtrack by Trent Reznor and Atticus Ross is a perfect accompaniment to Fincher's spectacular visual style, the music at times overpowers the words-which has as much character presence as the actor's who are voicing them.

The film, a "Citizen Kane" for our times, never bores and will help put in better perspective a story about how a computer geek had the knowhow, timing, & luck, to earn a king's ransom establishing a network that now involves over 500 million humans interconnecting as "friends" on the World Wide Web. 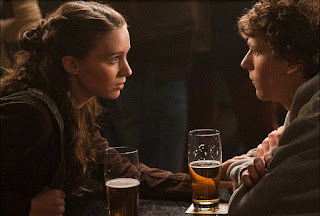 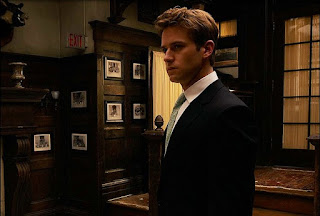